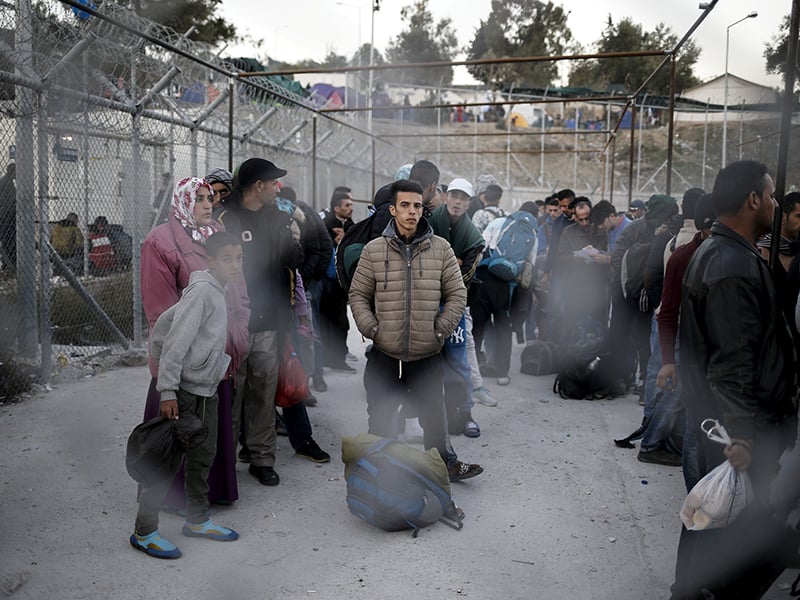 Refugees and migrants wait to be registered at the Moria refugee camp on the Greek island of Lesbos, on November 5, 2015. Photo courtesy of Reuters/Alkis Konstantinidis/File Photo
November 2, 2016
Jerome Socolovsky

Refugees and migrants wait to be registered at the Moria refugee camp on the Greek island of Lesbos, on Nov. 5, 2015. Photo courtesy of Reuters/Alkis Konstantinidis/File Photo

ATHENS, Greece (RNS) Abdul rose just before sundown on one of the last days of the holy month of Ramadan. The 17-year-old refugee from Afghanistan was keeping odd hours, eating breakfast in place of dinner and passing the day in slumber.

Abdul, whose name has been changed to protect his privacy as a juvenile, lives in a shelter for underage refugees who arrived in Greece without parents. For many, this was their first Ramadan away from their families, and it was a lonely one.

“In Afghanistan, our father, mother, sister all fast. All people are doing it. Here, it’s different,” Abdul said. “It will be difficult for us, but we will not forget our religion.”

Abdul and his friends find themselves in one of the most homogeneous Christian nations in the world. Greece, which is 98 percent Orthodox Christian, hosted 1 million migrants on their way to other European countries. The vast majority of those passing through were Muslim.

RELATED: With construction of a new mosque, Greek Muslims look to come out of the shadows

Greece has won high praise for its hospitality toward the migrants. Some islanders on the front lines were even nominated for a Nobel Peace Prize. Greeks take pride in this and point to their history to explain this reception.

A population exchange with Turkey after World War I brought in over a million ethnic Greeks as refugees. When the new migration crisis began last year, there was empathy for the new arrivals, with many Greeks recalling what their grandparents went through.

But even given that proud history, academics and volunteers fear that the warm welcome of the last year could wear thin when the refugees start to integrate in a nation that has long resisted a multifaith identity.

Another, more challenging historical legacy is under the surface — a modern state that has defined itself in opposition to the Islamic world it borders.

“Historically, modern Greek national identity has been built against the other, and the other was Turkey,” said Anna Triandafyllidou, a professor at the European University Institute who specializes in Muslim integration. Before its independence, Greece endured 400 years of Ottoman rule. “Islam was the enemy,” she said.

Today, 57,000 refugees like Abdul remain stuck in Greece after Europe closed its internal borders, and many are likely to be forced to remain indefinitely. The European Union’s plan to relocate 160,000 asylum-seekers has been moving glacially, to date relocating only 2,213 refugees.

Angeliki Dimitriadi, a research fellow at the Hellenic Foundation for European and Foreign Policy and a specialist in irregular migration, said that, although the situation remains fluid, she expects that significant numbers of migrants will find themselves living in Greece for the long run.

As these refugees slowly resign to making Greece their home, experts say, they will encounter a country that has long resisted assimilating Muslim migrants. Orthodoxy seems inextricable from life in Greece, pervading conceptions of national identity. And at a time when terrorist attacks by Islamic State affiliates have set Europe and the United States on edge, including some recent attacks by refugees, Muslim integration in Greece looks to be even more of a challenge.

Like the Muslim migrants who came before them, today’s refugees will encounter a Greek national identity that is one of the most rigidly defined in all of Europe. In Greece, Orthodoxy is sometimes viewed as a prerequisite for being Greek.

Asked about the pervasiveness of Orthodoxy in Greek culture, Triandafyllidou related a personal anecdote. When she decided not to have her children christened, many mistakenly told her she would not be able to enroll them in school.

“There is a feeling if you are Muslim or Jewish, that is a no-go,” Triandafyillidou said of the reluctance to accept people of other faiths into Greek society.

Seventy-eight percent of Greeks say that being Christian is important to be truly Greek, more than in any other European country surveyed by the Pew Research Center.

In one infamous example, an Albanian schoolboy forfeited his right to carry the Greek flag during a holiday parade, an honor granted to a student with outstanding grades, after a hate campaign by his classmates and their parents. Two decades ago, immigrants from Albania faced discrimination in Greek society.

“The only good foreigner, the only foreigner that is welcome is the tourist,” said Odubitan, still critical of Greece’s attitude toward foreigners, despite passage of the new law.

Xenophobia buried under the surface

Today, anti-Islam sentiment is on the rise, with 65 percent of Greeks expressing “unfavorable views” of Muslims, up from 53 percent in 2014 before the refugee crisis began, according to a survey released by the Pew Research Center on July 11.

More than half of Greeks believe refugees will increase the likelihood of terrorism in the country, and 72 percent consider them an economic burden.

While concerning, these statistics don't necessarily translate into renewed attacks on Muslims. According to Dimitriadi, Greek sympathy toward the plight of refugees has largely taken precedence over any association people might make between Muslims and terrorism. She added that, in her opinion, an increase in anti-Islamic sentiment has more to do with the public discourse surrounding recent terrorist attacks.

“I think it has a lot to do with what happened in Western Europe in the past year,” Dimitriadi said, referring to terrorist attacks in places such as Paris and Brussels. “I think it’s easy because we always blame the one who’s different. And right now in Europe the danger and the difference comes from Muslims.”

Some find it surprising that the refugee crisis so far has not brought an uptick in violence against Muslims. Many new arrivals say they have not experienced discrimination based on their Muslim faith.

For Eid al-Fitr, the government opened stadiums throughout the city for prayer. On the first day of the holiday, members of the Pakistani community gathered in a former Olympic Boxing Stadium in northwest Athens. Though the refugees living in camps and shelters were welcome, none came.

Imam Shahbaz Ahmed Siddiqi was one of the last to leave the Olympic stadium after prayer ended. He had spoken passionately behind a podium lit by fluorescent rainbow lights. Asked about anti-Islamic sentiment in Greece, Siddiqi remembered the spike in xenophobia during the 2010 financial crisis that saw the rise of the neo-fascist party Golden Dawn.

“Our Greek neighbors were afraid. They thought maybe (Muslims) were dangerous and they blamed all bad things on immigrants,” Siddiqi said. Under a left-wing government, these feelings have been quieted, even under the pressure of the refugee crisis. And for now, anti-Islamic sentiment remains buried below the surface of Greece’s hospitality.

Quickly, Siddiqi was rushed outside — the Greek Para-Olympic Basketball team was scheduled to practice soon, and the place would show no sign of Islamic observance by the time the players arrived. Behind him, a sign hanging below the scoreboard read “Score a three-pointer against racism.”

(This article was produced in conjunction with Princeton University’s new Global Reporting initiative and overseen by Joe Stephens, Ferris Professor of journalism at Princeton and a veteran investigative reporter for The Washington Post. Funding was provided by Princeton’s Ferris Seminars in journalism and the Seeger Center for Hellenic Studies.)