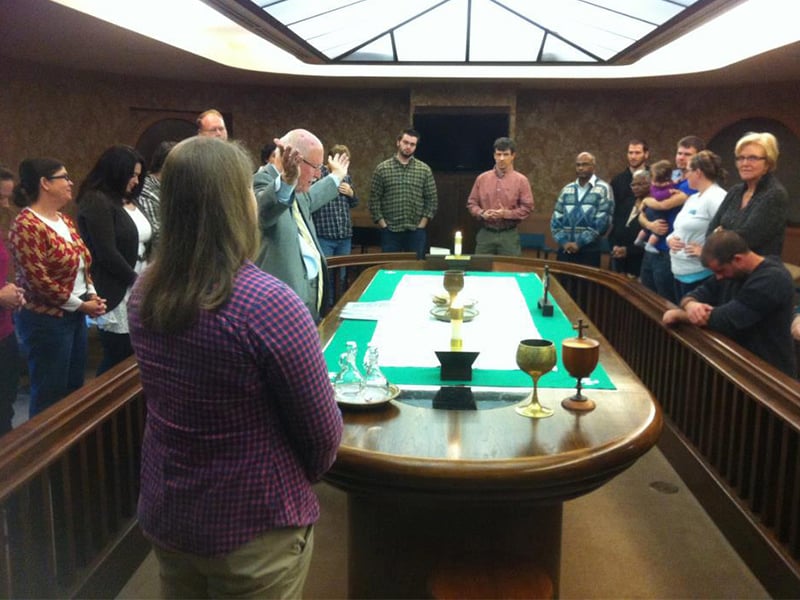 (RNS) The idea for an Election Day church service came to the pastor as he was pouring juice into little plastic cups.

Mark Schloneger was preparing for Communion that day in 2008 in the kitchen of Waynesboro Mennonite Church in Virginia’s Shenandoah Valley. The phone rang. It was a robocall from Sarah Palin, the GOP’s vice presidential nominee that year. She was imploring Christians to go to the polls, vote for her party and take back the country. 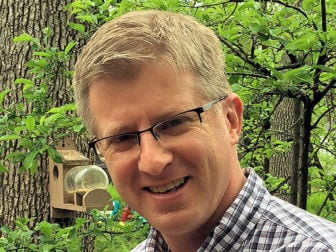 The call irked Schloneger. It was a perfect example, he said, of “how the siren songs of partisan politics interrupts our communion with each other and God.” It was then he thought of a way to do what he considered the opposite: to offer a Communion service on Election Day to bring Christians together.

It took a full election cycle for the idea to take off, but in 2012 Schloneger and friends inspired about 900 congregations across the nation to hold Communion on Election Day.

This year, after a presidential campaign many Americans deem the most divisive in their lifetimes, these services feel even more necessary to those organizing them — independently or as part of Election Day Communion 2016, as the movement is called. Thousands of Christians will end this election season in the pews, praying and singing to remind themselves of God’s sovereignty in their lives.

It’s not to diminish the importance of voting and taking part in the democratic process, but about seeing another perspective, said Jason Boone, the Mennonite lay leader organizing Election Day Communion this year.

“It’s one individual, one vote. We go into the booth alone and we have all this power,” said Boone. “Then you go to Communion or you’re with the body (of believers). And you say, ‘You know what? My power is going to be in serving all of these people.'”

In some churches Election Day services go back several election cycles. In others, like McLean Baptist Church in Northern Virginia, it’s a new tradition inspired in part by a presidential campaign that has exposed deep fault lines over race, religion, class and gender. 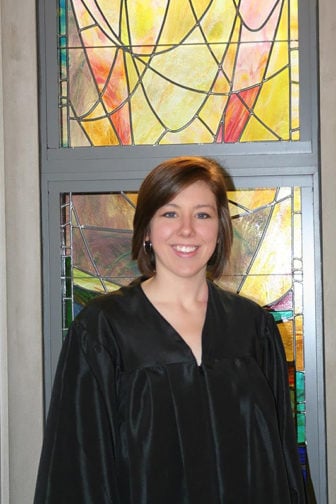 “The goal is to remind ourselves that God is One. The Scriptures that will be read have to do with God and God’s people being one and being united,” said Katie Morgan, McLean Baptist’s minister of spiritual formation and outreach.

For her church’s service, scheduled for the day after Election Day, Morgan and her colleagues have chosen, among other passages from Scripture, Ephesians 4:1-6 and John 17:20-23.

“The Ephesians passage speaks to the oneness of the faith, ‘one Lord, one faith, one baptism,'” Morgan said. “Through faith we are united despite political affiliation, denomination or cultural preference.”

“The John passage reminds us that Christ is one with God. Therefore, God is the author of unity, especially in the demonstration of the Trinity,” she added.

The hymns they chose for the day: “They’ll Know We Are Christians,” “We Are One in Christ,” and “Blest Be the Tie That Binds.”

Churches participating in Election Day Communion in 2016 organize a service and advertise it on the movement’s website and Facebook pages, each of which includes an interactive map to help seekers find the service closest to them. There’s no prescribed way to hold the service, though the organizers are ready to share ideas.

This year, more than 260 churches have signed up so far — some of them holding joint services with other churches. Most are Protestant, including many Mennonite, Anabaptist, Methodist, Episcopal and Disciples of Christ congregations.

Why is the list of churches so much shorter this year than in 2012, which seemed like a civil and calm election season by comparison? Boone said that through internet searches he knows many churches are holding Election Day services and simply not alerting his team. That’s fine with him, because the important thing is to hold the services, he said. A sign for voting and Communion at Central United Methodist Church in Lawrence, Kan., in 2012. Photo courtesy of Election Day Communion 2016

He offers another possible reason for the dip in participation: Some people may believe that the country is at a precipice, and that the stakes in this particular election are so high, and the political divide so wide, that coming together at the end may not seem possible.

Blogger Fred Clark, writing on the Patheos website before the 2012 election, expressed that general sentiment — questioning how, with LGBT questions on the ballot, gay people and their supporters could participate in a Communion service with fellow Christians who had just voted against gay rights.

While he appreciated the idea of Election Day Communion, Clark concluded that “it risks trivializing the enormous stakes today for many millions of people by treating all political disagreements as little more than angry looks exchanged between neighbors with different yard signs.”

Boone said he understands why those who feel most intensely about the election might be leery of an Election Day Communion. He admires their devotion to causes they hold dear. But he also wonders if these people could benefit the most from Election Day services.

“There’s a perspective and a grounding that can only happen through the church,” he said.

The Rev. Nathan D. Hilkert, who leads the Lutheran Church of the Messiah in Decatur, Ga., said it’s not only congregants who need that grounding, but pastors themselves.

He is one faith leader who freely acknowledges that he feels strongly that Democrat Hillary Clinton should win the election and that rival Donald Trump should be defeated. He doesn’t shout his preference from the pulpit. “But talk to me for 10 minutes and you know where I stand,” he said.

His church takes part in Election Day Communion 2016 with six other area congregations, to summon up a spirit of reconciliation which he longs for himself. “I do struggle to understand people who are equally strong for the opposite candidate,” and that’s where sharing Communion helps, he said.

“We are taking up shared convictions, expressing ourselves in a shared language. Trying to find those places of commonality is important to me,” Hilkert said.

“Our religious convictions give us the picture of what it is we hope to achieve and see in the world.”

Among the churches offering services independent of the national effort is the Washington National Cathedral, which has scheduled three services on Nov. 9, including one before school geared to parents with children. Staff at the schools associated with the cathedral noticed students growing increasingly stressed as the lengthy campaign season wore on.

This lineup of post-Election Day services — plus prayers on social media in the days leading up to the election — is something the cathedral has never offered before.

“Then again, we haven’t seen a campaign quite like this before,” said Kevin Eckstrom, the cathedral’s chief communications officer. 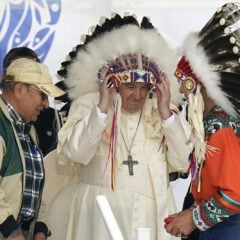 News
At Indigenous church, Pope Francis lays out his vision for reconciliation in Canada