(RNS) A strong white evangelical, white Catholic and Mormon vote for Donald Trump belied the condemnation many religious leaders had leveled at the tycoon and paved the way for a stunning upset after a long and polarizing campaign.

Preliminary exit polls indicate these religious groups voted for Trump by wide margins — and, in the case of white evangelicals, wider than they had given to GOP presidential nominee Mitt Romney in 2012.

“Donald Trump made the most full-throated and aggressive appeal to evangelical voters … since Ronald Reagan spoke to the Religious Roundtable in August of 1980,” Ralph Reed, chairman of the Faith & Freedom Coalition, said the day after the election (Nov. 9).

“He made these voters of faith a centerpiece of his campaign.”

White evangelical support for Trump surged even as prominent evangelicals, including Southern Baptist Russell Moore, railed against Trump’s behavior toward immigrants, women and other groups as un-Christian.

Trump never cast himself as a particularly religious person. And Hillary Clinton made her commitment to her Methodist faith known on the campaign trail.

But no one should be surprised by evangelicals’ turnout for Trump, said Robert P. Jones, CEO of the Public Religion Research Institute.

“White Christians are declining every year by a percentage point or more as a proportion of the population,” added Jones, the author of the book “The End of White Christian America.” “So when Trump says, ‘I’m your last chance, folks,’ there’s a real truth to that.”

“These divides are powerful in America today, and they are deeply entrenched in the church,” McConnell said.

Some prominent evangelicals who supported Trump acknowledged that his lifestyle and behavior had given them pause. But he actively sought evangelical votes and proved himself, said Tony Perkins, president of the conservative Family Research Council. 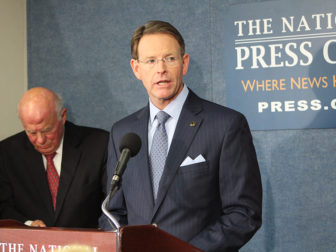 “Donald Trump went out of his way to build a relationship with evangelicals. I’m not saying there’s 100 percent trust, nor embracing what he has done in the past,” Perkins said. “But one thing evangelicals understand is that everybody has a past, but everyone has the promise of a future as well.”

“Once he captured the nomination, he didn’t say ‘well I’ve checked the box with evangelicals, I’m moving on,'” Perkins added. “He continued throughout the course of his campaign and the general election to communicate with, go to events of, and build upon the relationship with social conservatives.”

White Catholics also favored Trump, casting 60 percent of their ballots for him, compared to 37 percent for Clinton.

But it was the reverse for Latino Catholics: 67 percent went for Clinton and 26 for Trump.

Trump had alienated many Latinos during the campaign: lambasting the criminals and “rapists” among Mexican immigrants, promising to force Mexico to pay for a wall he would build on America’s southern border and denigrating a  judge because of his Latino parentage.

Perhaps there was a little more Latino support for Trump than expected, said Greg Smith, associate research director at the Pew Research Center. But otherwise, he said, the divided Catholic vote — between whites and Latinos — split as earlier polls had predicted.

“Talk about a ‘Catholic vote’ as a whole can obscure as much as it reveals because there are identifiable subgroups of Catholics who tend to vote in particular ways, and that is exactly what we saw in this election,” he said.

Catholics overall voted for Trump over Clinton 52 percent to 45 percent. That’s despite Pope Francis and other prominent Catholics’ rebuke of the candidate for railing against minority groups. Earlier this year, the pope had suggested that Trump, who identifies as Presbyterian, was “not a Christian” for his rhetoric about wall building.

Mormons nationally, according to exit polls, preferred Trump to Clinton by 61 to 25 percent.

The Mormon vote, key in overwhelmingly Republican Utah — where more than 60 percent of people belong to the Church of Jesus Christ of Latter-day Saints — gave Trump an easy win in the state.

Prominent Mormon politicians in the state — including Gov. Gary Herbert — had expressed outrage at Trump after a video released last month revealed the candidate’s lewd comments about assaulting women, and pulled their support for him. Given Mormons’ reputation for clean living and their embrace of traditional values, there was even some talk in the past few weeks about the red state turning blue, or at least purple.

But the backlash against Trump in Utah did not benefit Clinton. Anti-Trump votes instead seemed to gravitate to McMullin, who is Mormon.

The voting statistics on mainline Protestants make drawing meaningful conclusions difficult. Available exit poll data, compiled by a firm hired by a consortium of major national news organizations, does not break down the group by race — an important factor in analyzing the vote.

The Jewish vote in this presidential election looked much as it did in the past, with overwhelming support for the Democrat: Clinton garnered 71 percent compared with Trump’s 24 percent. That’s not far from the 69 percent for President Obama and 30 percent for Romney in 2012, and the 78 percent for Obama and 21 percent for rival John McCain in 2008.

Do not hold your breath for statistics on the Muslim vote in 2016.

Though the Muslim population of the nation is growing, and despite robust get-out-the-vote efforts among Muslim Americans, they still represent less than 1 percent of the electorate. That’s too little, pollsters say, to collect enough data to draw conclusions about their voting patterns.

But the numbers are in for the religiously unaffiliated, who now account for a quarter of U.S. adults but do not tend to vote as a bloc: 68 percent voted for Clinton and 28 for Trump.

READ: More ‘nones’ than you think, but many won’t show up on Election Day