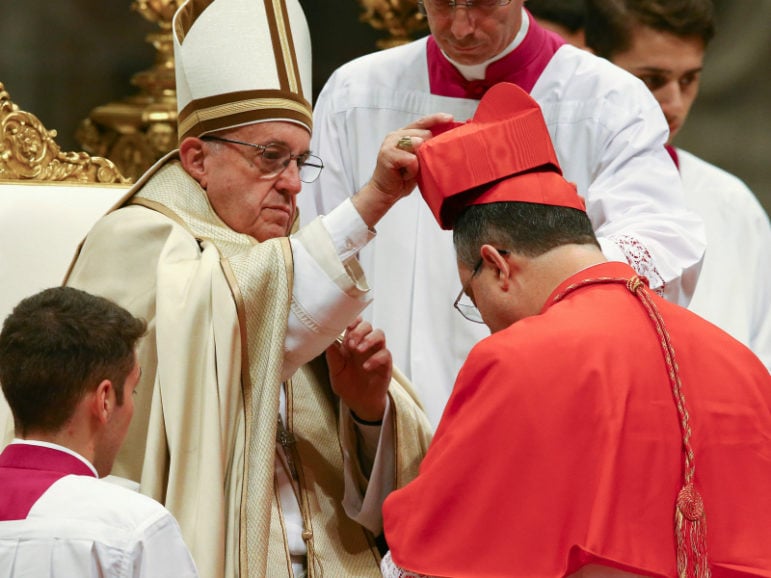 VATICAN CITY — Pope Francis gives the traditional red biretta hat to a new cardinal, Sergio da Rocha of Brazil, during a ceremony to install 17 new cardinals in St. Peter’s Basilica at the Vatican on Nov. 19, 2016. Photo courtesy of Reuters/Stefano Rellandini

VATICAN CITY (RNS) At a solemn ceremony in St. Peter’s Basilica to elevate 17 new cardinals, Pope Francis on Saturday (Nov. 19) delivered a ringing plea to the world and his own Catholic Church to reject “the virus of polarization and animosity” and the growing temptation to “demonize” those who are different.

The pontiff’s address came across as a powerful, gospel-based indictment of the populist and nationalist anger roiling countries around the world, displayed most recently by the stunning election of Donald Trump as president of the U.S.

“In God’s heart there are no enemies,” Francis told a grand assemblage of hundreds of clerics in elegant scarlet and purple vestments along with thousands of political and civic leaders and supporters of the new cardinals, who include three Americans.

Francis said “our instinctive reaction” is to “discredit or curse” those who we view as opponents, “to ‘demonize’ them so as to have a ‘sacred’ justification” for dismissing them.

God’s unconditional love, he said, “is the true prerequisite for the conversion of our pitiful hearts that tend to judge, divide, oppose and condemn.”

Trump – with his call for a registry for Muslims, a wall separating the U.S. from Mexico and promise to throw the undocumented out of the country — galvanized resentments against immigrants, religious minorities and others during the presidential campaign.

His victory, this summer’s Brexit vote and the growing popularity of nationalist movements across Europe have raised grave concerns around the world, including in the Vatican.

Francis made it clear that for him, such divisive sentiments are anathema.

“We live at a time in which polarization and exclusion are burgeoning and considered the only way to resolve conflicts,” said the pope, who turns 80 next month. “We see, for example, how quickly those among us with the status of a stranger, an immigrant or a refugee become a threat, take on the status of an enemy.”

Yet Francis did not spare his own church from his warning.

“Yes, between us, within our communities, our priests, our meetings,” he told the hundreds of clerics. “The virus of polarization and animosity permeates our way of thinking, feeling and acting.”

Those words carried a special resonance given the controversy that erupted in recent days as four conservative cardinals publicly challenged Francis over his efforts to make the church more open and pastoral in its ministry, saying that they may try to charge him with teaching heresy if he does not clarify some of his statements.

The “Gang of Four,” as some here have dubbed them, is led by U.S. Cardinal Raymond Burke, a Rome-based churchman who has been one of Francis’ staunchest foes since he was elected pope in 2013.

In an interview published on Friday, Francis appeared to respond to his foes – without naming them – saying some critics “are acting in bad faith to foment divisions.”

In his address in St. Peter’s on Saturday, Francis said such division were “contrary to the richness and universality” of the Catholic Church, which was on display in the range of new cardinals from countries around the world.

“We come from distant lands; we have different traditions, skin color, languages and social backgrounds,” he said. “We think differently and we celebrate our faith in a variety of rites. None of this makes us enemies; instead, it is one of our greatest riches.”

The churchmen elevated to the rank of cardinal on Saturday include prelates from 11 dioceses and six countries that have never before had a cardinal, and from places far outside the traditional European orbit of ecclesiastical influence: Albania, for example, plus the Central African Republic, Mauritius, Bangladesh, Malaysia and Papua New Guinea.

Three of the new cardinals are over the age of 80 and thus not eligible to vote in a conclave to elect Francis’ successor.

One of those new cardinals, Sebastian Koto Khoarai of Lesotho in Africa, is 87 and could not make the trip due to poor health. He is still considered an official cardinal.

Francis included three Americans in this new batch of cardinals, the first he has appointed from the U.S. in three rounds of nominations he has made so far.

They are Cardinal Blase Cupich, archbishop of Chicago; Cardinal Joseph Tobin, archbishop of Indianapolis and soon to head the Newark Archdiocese in New Jersey; and Cardinal Kevin Farrell, an Irish-born churchman whom Francis recently transferred from the Dallas Diocese to a major post in the Roman Curia.

Of the 228 current members of the College of Cardinals, 121 are under 80 and thus could vote in a conclave. Vatican guidelines set the number of cardinal-electors at 120, though a pope can exceed that limit.

Francis has appointed 44 of the current cardinal-electors, about one-third. Fifty-six were appointed by his immediate predecessor, Pope Emeritus Benedict XVI, and 21 were named by St. John Paul II.

Benedict, who in 2013 became the first pope in 600 years to resign, is 89 and infirm and lives in a monastery inside the Vatican walls.

This is the first consistory, as the service creating new cardinals is known, that Benedict has not been able to attend.

But the new cardinals piled into two minibuses immediately after the ceremony in the basilica and drove through the Vatican gardens to pay Benedict a courtesy visit.