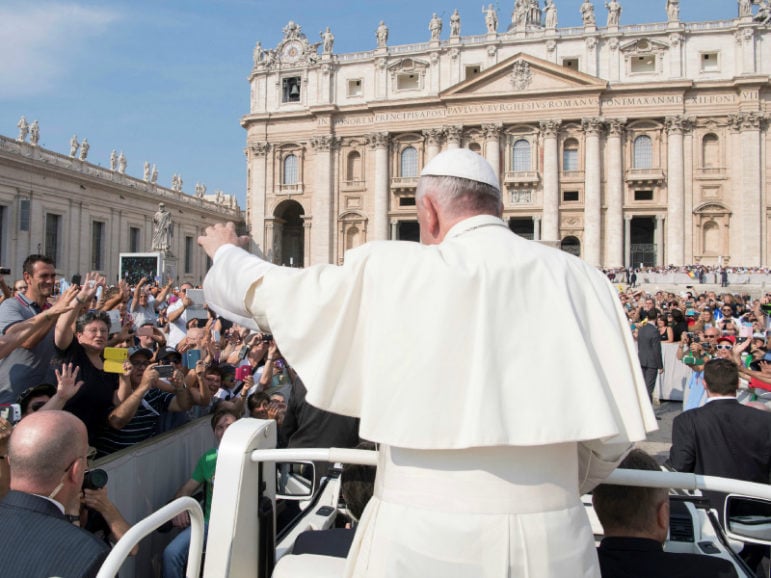 Pope Francis waves as he leads a jubilee audience in St. Peter’s Square at the Vatican on Sept. 10, 2016. Shortly before the event, Francis administered the sacrament of confirmation to a seriously ill Italian teenager who had written to the pontiff. L’Osservatore Romano photo via Reuters. *Editors: This photo may only be republished with RNS-POPE-TEEN, originally transmitted on Sept. 12, 2016.

VATICAN CITY (RNS) Pope Francis is insisting that the Catholic Church be open and inclusive to all and that priests in particular be merciful and patient so that everyone can “participate actively in the life of the community.”

“Mercy is inclusive and tends to expand in a way that knows no limits,” Francis writes in a major document on mercy – the signature theme of his pontificate – that was released by the Vatican on Monday (Nov. 21).

As part of that effort Francis also used the letter to extend indefinitely the ability of any priest to absolve the sin of abortion – a sin that carries a penalty of automatic excommunication and had previously been reserved to bishops or specially designated priests to deal with.

The new abortion policy sparked much discussion when Francis first announced the initiative last year at the start of the Holy Year. In the letter published Monday, Francis reiterates “as firmly as I can that abortion is a grave sin, since it puts an end to an innocent life.”

But he repeated that he wanted to stress with equal force “that there is no sin that God’s mercy cannot reach and wipe away when it finds a repentant heart.” On this issue, he says, all priests should be “a guide, support and comfort.”

Known as an apostolic letter, the 10-page document was released a day after the pope formally closed a special Holy Year of Mercy, and it is a wide-ranging encomium to mercy that summarizes Francis’ thinking on the topic.

The constant thread is his concern for a practical application of mercy, which he sees as key to Catholicism’s credibility and to the “pastoral conversion” of its members and leaders to a more welcoming and less legalistic ministry.

The question of whether the pope’s insistence on mercy is diluting the church’s doctrinal principles has sparked concern and strong resistance by some church conservatives.

Francis’ promotion of an “inclusive” church has also become a battle cry for those who worry that the pope is relaxing sacred rules in a way that would allow, for example, divorced and remarried Catholics to receive Communion, or for openly gay Catholics to serve in official roles in parishes. Both issues have been flashpoints in the U.S. church.

In the letter, Francis says that family life today is complex and that Catholics must “regard all human problems from the standpoint of God’s love, which never tires of welcoming and accompanying.”

“This demands, especially of priests, a careful, profound and far-sighted spiritual discernment, so that everyone, none excluded, can feel accepted by God, participate actively in the life of the community and be part of that People of God,” he writes.

Francis cautions against the “temptation to theorize ‘about’ mercy” and he stresses that “by its very nature, mercy becomes visible and tangible in specific acts. Once mercy has been truly experienced, it is impossible to turn back. It grows constantly and it changes our lives.”

The letter is titled “Misericordia et misera,” Latin for “Mercy and misery,” a phrase used by the great fifth-century bishop and theologian St. Augustine in a meditation on the parable in the Gospel of John about Jesus saving a woman taken in adultery from the threat of stoning by religious authorities.

“Here what is central is not the law or legal justice, but the love of God, which is capable of looking into the heart of each person and seeing the deepest desire hidden there,” Francis writes. “God’s love must take primacy over all else.”

Francis clearly did not want the Holy Year of Mercy to come across as a one-time event. Rather, he sees it as the organizing principle for his pontificate and, in his view, for the entire church going forward.

The pope also indefinitely extended the authority to hear confessions to priests of a right-wing group, the Priestly Fraternity of St. Pius X.

The group is also known as the Lefebvrists, after the archbishop who led them to split with Rome in the 1980s over their insistence on celebrating the old Latin Mass and their opposition to church reforms such as the acceptance of religious liberty and dialogue with other churches and religions.

The Vatican has been trying for years to end the schism and reintegrate the Lefebvrists, and Francis’ gesture, first announced last year, was seen as a signal of his desire to heal the split.