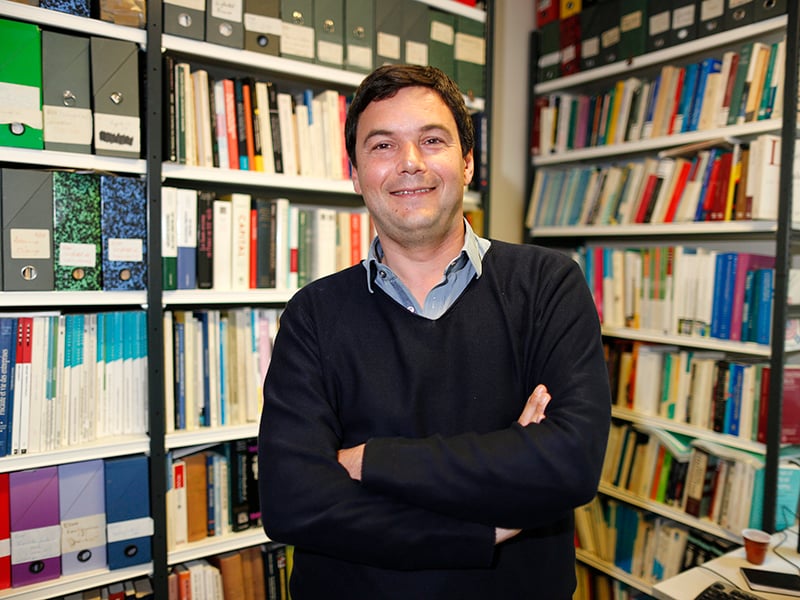 French economist and academic Thomas Piketty poses on May 12, 2014, in his book-lined office at the French School for Advanced Studies in the Social Sciences, in Paris. Photo courtesy of Reuters/Charles Platiau *Editors: This photo may only be republished with RNS-NASSER-OPED, originally transmitted on Nov. 22, 2016.
November 22, 2016
Tahir Nasser 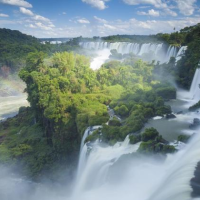 (RNS) “Why did America vote for Donald Trump?” is the question of the year. The answer can be found buried in rock-star economist Thomas Piketty’s highly acclaimed 700-page tome, “Capital in the 21st Century.” By Trump’s own admission, he is too busy watching Megyn Kelly to read books, so I’m going to pick out its best bits for him (and you).

Piketty “proves” that the more one’s income derives from wealth than from wages, the richer one becomes, faster. Specifically, he showed that the yearly rate of return on wealth (think houses, land, gold, etc.) usually exceeds the yearly increase in wages, known as the growth rate. The inter-generational consequence, says Piketty, is that “people with inherited wealth need save only a portion of their income from capital to see that capital grow more quickly than the economy as a whole,” making it “almost inevitable that inherited wealth will dominate wealth amassed from a lifetime’s labor by a wide margin.”

Piketty goes on to show that on the eve of World War I, the top 10 percent owned around 90 percent of the wealth in the U.K., with the top 1 percent owning 70 percent. Today, those figures stand at 70 percent and 30 percent respectively, a decline due to the shocks to wealth during the tumultuous period of 1914-1945. This trend was the same across the Western world, and strikingly, the data show that the levels of economic inequality are now returning to pre-World War I levels.

Thus, when Trump promised an economy that works for the working class, his win became inevitable. The masses, disillusioned with Washington’s decadeslong failure to prevent their slide into poverty, voted in a renegade, loudmouth outsider. If Trump wants to do any better than them, though, he better pay attention.

Piketty advocates for a modest capital tax of 1 percent on fortunes between $1 million and $5 million, and 2 percent on fortunes above $5 million. Such a tax would exempt his voter base – the working class — yet would bring in large amounts of revenue. Piketty claims that such a tax, related to market value of assets, is a "new idea."

Piketty’s recommendations are sound. Bad news for Mr. President-elect is that Piketty’s solutions, contrary to his claims, are not new, but have actually been a part of Islam for the past 1,400 years in what is known as zakat. Zakat (meaning "that which purifies") is taught in the Quran (2:278):

Surely, those who believe and do good deeds, and observe Prayer and pay the Zakat, shall have their reward from their Lord, and no fear shall come on them, nor shall they grieve.

Piketty’s claim that no society ever enacted capital taxation on assets valued at market rates is simply wrong. The Prophet of Islam levied zakat at 2.5 percent on net assets greater than the market value of 87.48g of gold or, if one’s assets were diversified beyond gold holdings, 612.36g of silver. For centuries, millions in the largest empire the world had ever known practiced what Piketty advocates. Sadly, Piketty stands at the end of a long line of European scholars who fail to recognise the contributions of the thriving Islamic civilization that dominated the world for 800 years.

In fact, Quranic teachings go further than Piketty’s recommendations, and here, Trump needs to pay attention. By specifying that zakat should be spent on the least-well-off in society – the poor, the needy, for freeing of slaves, those in debt, and for travelers, as well as others – the Quran significantly diminishes the cause of economic inequality Piketty unearthed: the gap between the rate of return on capital and the growth rate.

The Quran further drives the growth rate by firstly, forbidding financial tools that have no relationship to the "real economy," and secondly, by levying zakat only on assets unused after a year, thereby incentivizing investment over hoarding. As Yanis Varoufakis, the former Greek finance minister, recently remarked in response to Trump’s anti-free-trade stance, “It isn’t free-trade that is the problem. It is the free movement of profits from trade.”

Finally, if Trump wants to really help those white working class who elected him, he needs to recognize what Piketty has failed to: the root cause of economic inequality. Sure, Piketty recognizes that one need “save only a portion of their income from capital to see that capital grow more quickly than the economy as a whole,” but this is a secondary effect enabled by the fact that wealth is already accumulating faster than income. So what causes the primary rapid rate of capital accumulation?

For the poor, interest serves to push the indebted further into debt. Money printed for interest enters the pockets of the rich first. They drive up prices in the marketplace, so that by the time such money reaches the poor, their income is already devalued as compared to assets. Thus, the poor whose income comes from wages and not assets have rising interest-driven debts to pay with money that is increasingly devalued, while trying to buy assets that are always increasing in price.

The Quran summarizes all this by explaining that interest, though appearing to increase wealth in society, does not. It is zakat, the Quran emphasizes, through which money is circulated in society from the bottom up that increases standards of living across the board.

Unless Trump enacts policies to redress economic inequality, he will be a failure to half his country and remain a buffoon to the rest. The problem is that he would have to take a lesson from the Quran, to do so. Lord knows the last thing Trump would want to do is look like he is implementing Islamic teachings!

"Creeping Shariah" if ever I heard it.

(Tahir Nasser is a 27-year-old physician and a regular contributor and commentator in British media. Find him on Twitter: @TahirNasser)