(RNS) God made hipsters in his image, too.

That’s part of the thinking behind a “Hipster Nativity” set being peddled by a group of friends who came up with the idea over a few beers, no doubt handcrafted ones. In it, Joseph sports a lumberjack beard and a man bun while he uses his iPhone to selfie the special moment when the Segway-riding wise men present baby Jesus amazon.com boxes.

A cow bearing a “100% organic” seal and a sheep in a handknit sweater breathe on the baby under the manger’s solar-powered roof. 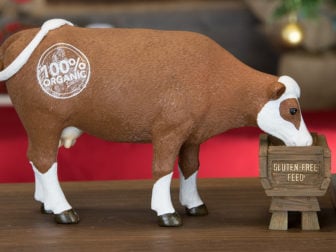 Mary — in traditional sky blue — flashes a peace sign with one hand as she holds a Starbucks cup aloft in the other.

Hipster Nativity has, to say the least, been controversial.

“We have quickly found out that this product is very polarizing,” Casey Wright, a co-founder of Modern Nativity, the single-product company behind the idea, told CNBC. “It’s usually, ‘This is hilarious, I need one,’ or ‘This is sacrilegious, I hope you burn in hell,’ and almost nothing in between those two extremes. Mary — in traditional sky blue — flashes a peace sign with one hand as she holds a Starbucks cup aloft in the other, in the Hipster Nativity set. Photo courtesy of Modern Nativity

“Amazingly,” he added, “a lot of people seem very concerned about the proper definition of a millennial and a hipster, too. We get comments like, ‘Segways aren’t hipster. They’re technically early-stage millennial with a tinge of East Coast liberal.'”

Irreverent holiday items are having a moment, perhaps a reaction to the “war on Christmas” propagated by conservative media. There are anti-Christmas cards and anti-Christmas ornaments.

Jordana Starr, a Massachusetts-based graphic designer, has sold about 300 handmade “Flying Spaghetti Monster” ornaments for a more reasonable $20 featuring a clay sculpture of the googly-eyed ball of pasta adopted by Pastafarians — a group of atheists with tongues firmly planted in their cheeky cheeks.

“A tree isn’t inherently religious,” Starr said. “We have fun with ours.” 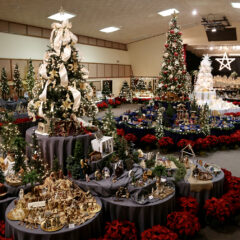