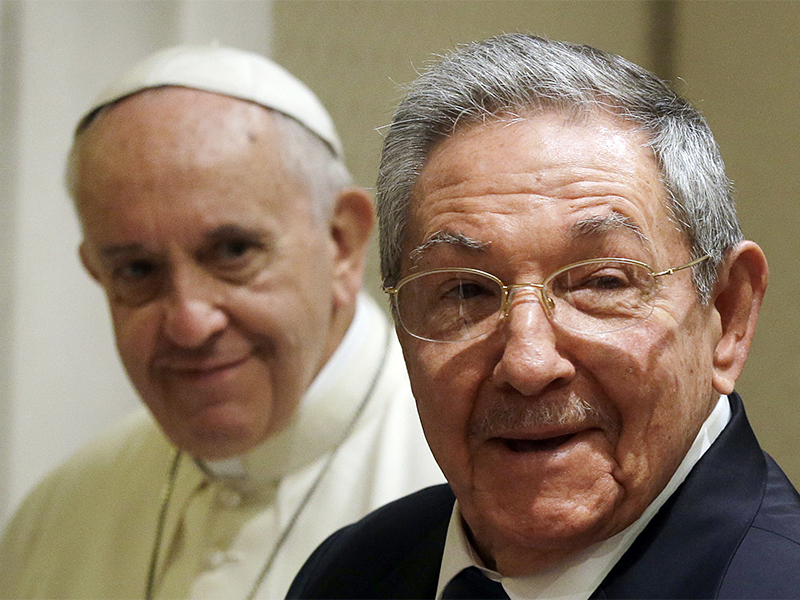 Cuban President Raul Castro, right, smiles as he meets Pope Francis during a private audience at the Vatican on May 10, 2015. Photo courtesy of REUTERS/Gregorio Borgia/pool
December 2, 2016
Yonat Shimron

(USA Today) The relationship between Fidel Castro and the Cuban Catholic Church has been a roller-coaster ride of ups and downs, though it has noticeably improved in recent years.

Even in his death, announced last week (Nov. 25), Castro defied the church by requesting that his remains be cremated, a practice accepted but discouraged by the Vatican.

But his death could also embolden the church to take a more proactive role on the communist island in the years to come and bolster its budding relationship with his brother, President Raúl Castro, said Enrique Pumar, head of the Sociology Department at Catholic University of America, who has studied the Catholic Church in Cuba.

“This is definitely an opportunity,” Pumar said. “Raúl is going to be more open to the church. But this is going to happen gradually. That’s the way change takes place in Cuba.”

Fidel was schooled in an elite Jesuit school in Santiago de Cuba in the eastern part of the island and later attended the Jesuits-led Colegio de Belén in Havana. Even the band of guerrillas he led in the 1950s weren’t all atheists. They had a chaplain, appointed by his bishop, to baptize babies born in the Sierra Maestra and to bury the dead revolutionaries, journalist and author Austen Ivereigh wrote recently in Cruxnow.com, an online Catholic news outlet.

“But as the revolution turned atheist and communist, and the clergy turned against it, in Fidel’s binary politics, the Church was an enemy of the revolution,” he wrote.

Fidel’s regime abolished church activity, shuttered churches and sent many priests across the island underground. Government control over churches began to loosen in the 1970s and further eased after Pope John Paul II’s visit in 1998. Visits by Pope Benedict in 2012 and Pope Francis last year further warmed relations. Indeed, Francis served as the catalyst for the renewed U.S.-Cuban relations.

Critics, mainly Cuban-American exiles and within Cuba’s dissident community, denounced the Cuban church for appeasing a regime that routinely crushes dissent and continues to restrict the church. But church leaders had created just enough space for itself to begin making changes from within the country, said Ted Henken,a Baruch College Latino studies professor and longtime Cuba scholar and author.

Five years ago, then-Cuban Cardinal Jaime Ortega negotiated the release of 126 political prisoners. Ortega, who stepped down as cardinal this past summer, also helped broker the historic rapprochement between the USA and Cuba, which began in 2014.

Church leaders could now hope to reap further gains in a post-Fidel Cuba, Henken said. “The Catholic Church has very wisely -- politically, strategically -- positioned itself for this day,” he said.

One area where the church could push the government is to allow parochial schools in Cuba, because they are currently restricted by the regime, Pumar said. The church could also take an active role in brokering discussions between civil society and state leaders, he said.

“A lot of people recognize this is not going to be settled on any battleground,” Pumar said. “There has to be some form of conversation and negotiation.”

Through all the restrictions, the Catholic Church remains the only institution in Cuba completely independent of the communist government, said Archbishop Thomas Wenski of Miami. Though restrictions have loosened in recent years, more is needed, he said.

“The church has suffered over the years at the hands of this government: expropriation of properties, expulsion of priests, limitations on admissions to the country of missionary priests,” Wenski said. “The government in recent years has relaxed its stance toward the church and her members. This is positive, but ... still more progress is needed.”