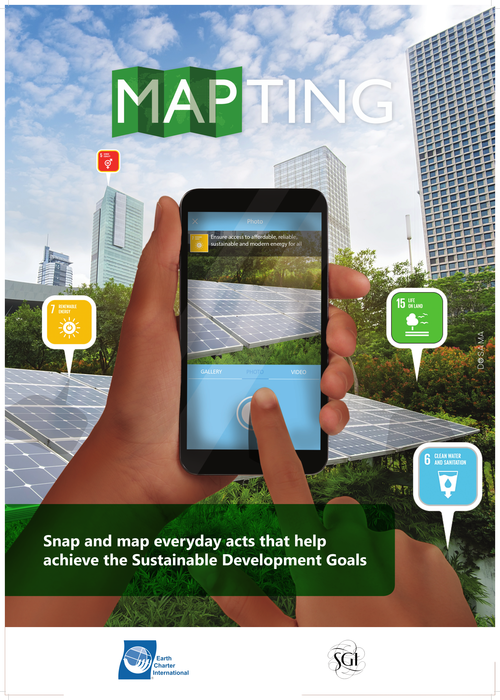 Called “Mapting” (“mapping” and “acting”), the app was developed jointly by the Soka Gakkai International (SGI) Buddhist association and the Earth Charter International (ECI) as a way of engaging and educating youth in the challenge of making the 17 SDGs a reality by the target date of 2030.

The Mapting app, which became available for use on both Android and iOS devices as of December 2, 2016, can be viewed and downloaded here: www.mapting.org.

Mapting is a mobile participatory app that invites users to take photos or videos of any act, project or idea that will help achieve the SDGs and share them on a world map.

The SGI and ECI have cooperated for over 15 years in the creation of awareness-raising exhibitions that promote education for sustainable development. Tadashi Nagai, Program Officer for SGI, commented, “We believe the Mapting app can make a real contribution in terms of sharing information. It can spread a positive message that one individual’s action can make a difference.”

Dino De Francesco, Digital Communication Specialist for ECI added, “With the ‘browser’ function, users can see other activities going on in their area. For example, if I see that someone has organized a really great organic garden maybe I can contact them and even collaborate.”

Users can also learn about the values and principles of the Earth Charter, by unlocking principles with each shared picture or video.

The launch of the Mapting app was announced at an event titled “Youth Boosting the Promotion and Implementation of the SDGs” held at the UN Headquarters in New York on November 10, 2016. The event was organized by the Permanent Mission of Sri Lanka to the United Nations in collaboration with the SGI and ECI.

Dr. David Nabarro, the UN Secretary-General’s Special Adviser on the 2030 Agenda for Sustainable Development, commented at the event, “The SDGs are the plan for the future of the world and its people. We have to make sure there is space for young people everywhere to be part of this movement. I’d love it if we have one million activists.”

The Mapting app homepage features 17 SDG icons representing each of the SDG action areas (Climate Action, Gender Equality, Responsible Consumption and so on). When uploading a photo or video to the app, users can enter their content under one of the action areas simply by clicking on the relevant icon. For example planting trees would relate to Climate Action, so they could click on the icon for Goal 13.

The event at the UN Headquarters announcing the launch of the app can be viewed HERE.

Soka Gakkai International is a community-based Buddhist association with 12 million members around the world. It engages in grassroots awareness-raising activities promoting peace and disarmament, education for sustainable development and human rights education in partnership with other NGOs and in support of the United Nations.