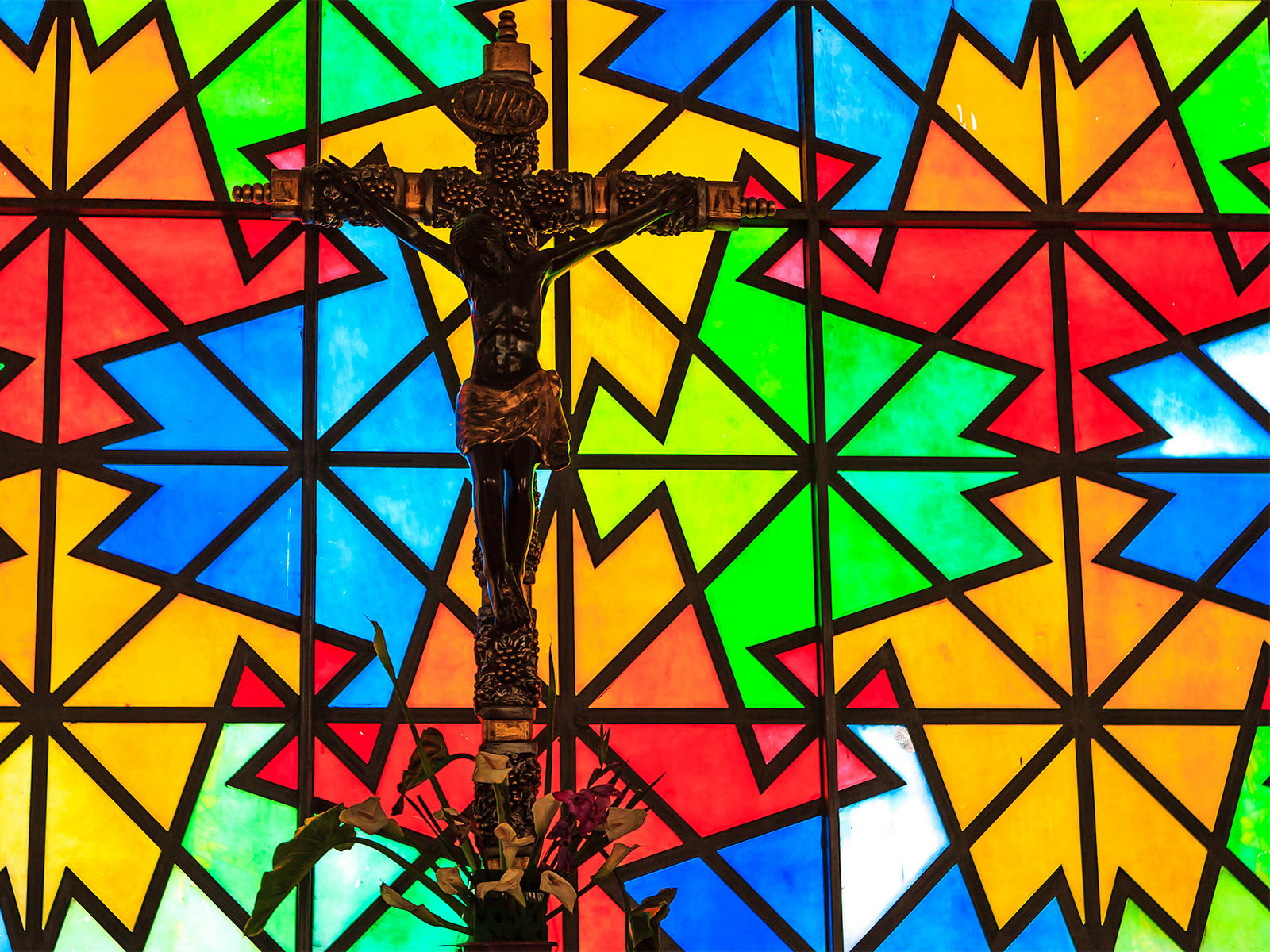 Stained glass behind a crucifix in a Catholic church. Photo courtesy of Murray Foubister via Creative Commons
December 14, 2016
David Gibson

(RNS) Even as Texas faces legal action against new regulations mandating the burial or cremation of fetal remains from an abortion or miscarriage, the state’s Catholic cemeteries are developing plans to provide free interment for any deceased fetus.

“To bury the dead is a work of mercy,” said Jennifer Carr Allmon, executive director of the Texas Catholic Conference, the public policy arm of the state’s 15 dioceses, in a Monday (Dec. 12) statement announcing the plans.

“We must treat the remains of all human beings, no matter how long they lived or how they died, with dignity, charity and respect,” she added.

The statement noted that many dioceses, such as the Archdiocese of San Antonio, have provided such services for years and many hospitals already cooperate with families, funeral homes, and cemeteries to bury fetal remains.

The Texas bishops will now work to expand that service at no cost to families or medical or funeral facilities. The Texas Funeral Directors Association unsuccessfully opposed the regulation and a spokesman told NPR that anticipated costs to funeral homes was one of the reasons for its concern.

The Department of State Health Services, which promulgated the regulations, estimated that in 2014, the latest year for which data is available, nearly 55,000 abortions were performed in Texas and there were 2,200 fetal deaths statewide.

There are more than 50 Catholic cemeteries in the state and the Texas Catholic Conference estimated it would cost each cemetery anywhere from $1,500 to $13,000 a year to provide the burials.

The regulation only applies to fetal remains from health care or abortion facilities, not to miscarriages at home. Patients are not required to participate in the disposition of the remains; burial records will be maintained by hospitals and cemeteries.

The regulations are set to take effect on Dec. 19, but abortion rights groups have filed suit to halt the new policy.

The American Civil Liberties Union, which is one of the plaintiffs in Texas, challenged a fetal burial law in Indiana this year; that law was blocked while the appeal works its way through the courts. A similar law in Louisiana is on hold, NPR reported.

The fetal burial mandate is part of an effort by abortion foes in many states to restrict abortions or keep the procedure in front of the public.

In Ohio, Gov. John Kasich this week vetoed a bill that would have forbidden abortions once a fetal heartbeat could be detected.

But he did sign into law a bill banning abortions after 20 weeks of pregnancy. The new law provides an exception for saving the life of the mother but none for rape or incest, The Columbus Dispatch reported.

Abortion foes are also expecting that once he is sworn into office, President-elect Donald Trump and the Republican-controlled Congress will also cut federal funding for Planned Parenthood, which was the target of undercover videos purporting to show officials negotiating the sale of fetal tissue.

While Planned Parenthood did not appear to violate any laws, the graphic nature of the discussions shocked many and helped push efforts like the one in Texas to call attention to abortion and to dispose of fetal remains like any other body.