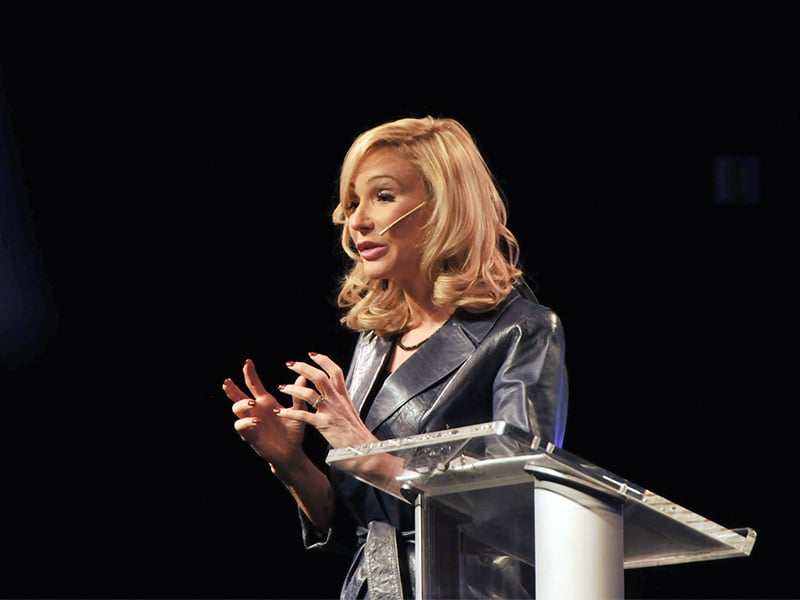 (RNS) Paula White has been called the president-elect's "God whisperer" and the closest thing Donald Trump has to a spiritual guide.

The televangelist also has been called a "Trinity-denying heretic" by Erick Erickson, conservative author of the popular blog, The Resurgent. And Russell Moore, president of the Southern Baptist Convention's Ethics & Religious Liberty Commission, called her a "charlatan" in response to reports she personally led Trump to faith in Christ.

Before White's name appeared alongside Trump's in the headlines — chairing his evangelical advisory board, praying at the Republican National Convention and bearing the brunt of the pushback against the lineup of clergy scheduled to speak at his inauguration as president — Iowa Sen. Charles Grassley had conducted a three-year probe into spending by six major televangelism ministries, including Without Walls International Church, the Tampa, Fla., megachurch she co-founded with her second husband Randy White.

The Tampa Tribune reported on lawsuits and liens against the Whites, on their million-dollar business jet and condo in New York's Trump Tower. Then there was the divorce from Randy White and the subsequent rumors of affairs. (She since has remarried for a third time to Journey keyboardist Jonathan Cain.) In a written statement earlier this month responding to some of the labels that have been applied to her since it was announced she would give the invocation at the inauguration on Jan. 20, White said she rejected "any theology that doesn’t affirm or acknowledge the entirety of scriptural teaching about God’s presence and blessing in suffering as much as in times of prosperity."

And while reports have noted her appeals for money, both at church services and in emails, she defined prosperity in her 2007 book "You're All That!: Understand God's Design for your Life," not "in terms of money or material objects" but as "a life that is fruitful physically, mentally, emotionally and spiritually."

It's not the personal attacks that bother White, she told RNS. The accusations of heresy, though, are a different story: "That’s my Lord, and that’s my Savior, and that is 32 years of my life."

She spoke with RNS for nearly 90 minutes earlier this month to share her side of the stories that have dotted the headlines throughout the presidential election cycle.

Any ideas yet what you plan to say in your invocation at the inauguration?

That's the biggest question. I've been truly, genuinely seeking God. I'm so honored to be able to stand with such great men and women of God … to pray for all of humanity, for the incoming president and vice president. What a privilege, but also, to me, what a deep responsibility!

Obviously, I do know whatever I pray will be backed by the Word of God. I will obviously seek counsel — because I believe there is safety in a multitude of counsel – and run it by several people ... those who would be spiritual covering and mentors to me. I feel that while I am extremely humbled – and grateful is the word, really – I want it to be God's voice through me and our voice collectively as the body of believers.

I see it as not just an assignment, but such a weighty responsibility, because, to me, prayer is so vitally important to everything. It's not a political thing for me. It’s spiritual. It's very sacred to me.

You released a statement saying your "personal favorite" allegation is that you deny the Trinity. You do affirm the Trinity on your website, but Erick Erickson's blog post included a video clip from a TV show in which you and another man are talking about how Jesus is not the only begotten Son of God, but the "first fruit." Can you explain this?

It’s a video that’s been taken out of context. It was a very difficult time in my life. I was taping, I think, 20 shows in two days. I'm sitting there, and I'm just kind of zombied out, guest after guest after guest. But the one thing I would never do is tolerate it if someone said Jesus Christ is not the Son of God. I would stop the show. I would be like, "Are you kidding me?" If you in any way deny him or the Trinity, there is absolutely no way. I would just go, "Stop, no, I'm sorry." I would never come in agreement or alignment with that whatsoever, 100 percent, nor do I believe that my producers or the people who booked guests would ever have anyone on that denied the Trinity. Ultimately, though, I take responsibility for everything under Paula White Ministries.

Lost in the controversy over your theology is the fact you're only the second woman ever to pray at a presidential inauguration and the first female clergy member to do so. Is that something you’ve thought about? Do you get the sense there is more openness to women in ministry, or do you think that's part of the reason for the pushback you've received?

I would love to go, "There's equality, and everything's good." I've done this for 32 years, and I've been told all the reasons I'm not supposed to, and the biggest reason is because I'm a woman. 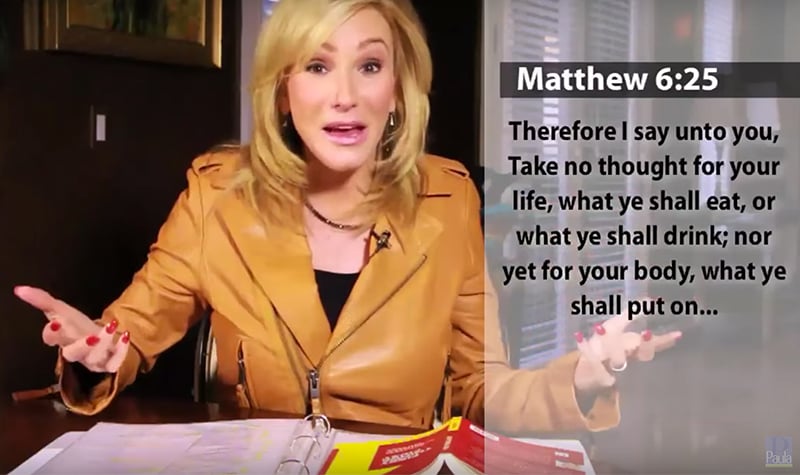 You’ve been characterized as Trump’s "God whisperer" and the closest thing he has to a spiritual guide. Do you think that’s an accurate picture of your relationship with the president-elect? What does your relationship look like?

Mr. Trump called me up out of the blue. He had been watching three sermons on television, and he quoted them back verbatim. He began to tell me his story – how he was confirmed in a Presbyterian church, grew up (attending Marble Collegiate Church, pastored by) Norman Vincent Peale — and we began to converse about the things of God.

A relationship developed, and if I was in town, he would invite me into his office and say, "Hey, come sit." I would sit like a fly on the wall and be there all day if I had a free day or several hours. I would pray for him, pray for his family, pray for his staff, just talk God, talk life. Little did I know 15 years ago Donald Trump would now become President-elect Trump. My assignment was always to pray for him and show him who God is.

If somebody wants to characterize that as I'm the "God whisperer" ... I'm a person that prays over him every day and the person that goes into prayer for him, a person that can walk into his office pretty openly and freely and pray over him before every rally if I'm there. ... That’s not unusual, and if God inspires me to share something with him, I do.

What do you imagine that will look like in the context of the White House? How you discussed this with him?

I've been asked to help, just like in the beginning of the campaign: "Would you invite some of your friends who are pastors?" He just wanted them to pray over him. They would bombard him and ask him questions. I would say it like this — this is my perception: 90 percent of people probably went in skeptical, maybe even disdaining or disliking him, and 80 percent would leave really liking him, and it wasn't because of his charisma or something. It was because in those settings they got to know the Mr. Trump that I've known for all these years.

Who is the Mr. Trump you've known all these years, and what made you an early supporter of his bid for president? A lot of other Christian leaders were supporting candidates like Sen. Ted Cruz and Dr. Ben Carson who wear their faith on their sleeve, while the president-elect stumbles a bit talking about his faith.

First off, if you go back to the very start of how he contacted me, there's always been a hunger in his heart for God and the things of God. I can take you through so many — he would say, "I was at this church and heard this sermon. What do you think?" Over the years, I've watched so many people reach out to him and ask for finances and ask for this or that, and he was such a charitable, giving man.

When he was in business, he would talk more openly about faith in some ways, but it wasn’t ever anything anybody wrote about. I heard him many times. But when he got into the political, my observation was every word was judged, obviously.

It was a preacher that told him right before he got up (to speak at Liberty University) — and Donald at the time didn't work off a teleprompter – he said, "Say, 'Two Corinthians: For where the spirit of the Lord is, there is liberty.'" I was just like, these are the things people don’t see.

He understands, he knows what he is doing when he takes communion: You ask for forgiveness.

He's not a pastor. He doesn’t walk with people who every day use our unique language. It'd be like thrusting me into the business arena. I don’t know that language.

There were reports this summer when there was talk about Trump being a "baby Christian" that you had prayed with him and led him to Jesus. Is that true?

Do I know he confesses Jesus Christ as Lord? One hundred percent. Can I say to you that I directly went, "Here's the Romans Road map (to salvation)?" I have directly shared the gospel with Mr. Trump. (But) he was confirmed as a little boy. They went to Sunday School and church every single Sunday ... so to say he's a baby Christian is to discount all of that foundation that is precious.

Look at the inauguration: He's chosen six (clergy members), and that’s not symbolism, it's people. It's people to pray over him and pray for our country because he recognizes there is division and there has to be some reconciliation and healing. He's called upon — look at it — a white evangelical, Franklin Graham; a female; a Hispanic, Dr. Samuel Rodriguez; Cardinal Dolan, Catholic; Jewish Rabbi Hier; and also an African-American, Bishop Wayne Jackson. That’s not symbol, that’s substance. That, to me, sums up so much.