(RNS) A little more than a week ago, President Donald Trump sat here at Washington National Cathedral as I offered a prayer asking God to “help break down the walls that separate us.”

A few days later, he signed an executive order imposing a complete travel ban on citizens from seven primarily Muslim nations, and a temporary ban on all refugees.

Trump’s actions are a challenge to the conscience of all Americans and people of goodwill.

This deeply troubling action is grounded in paranoia and fear of the stranger, and threatens to fracture families and unfairly penalize millions of innocent people. It is as un-American as it is un-Christian.

The president’s order, while temporary, is a narrow-minded response to the very specific problem of protecting our nation from the relative few who would perpetrate acts of terrorism on our soil.

The speed with which this executive order was implemented, and the lack of a reasonable rationale, suggests that it has less to do with national security and more to do with placating a xenophobic minority of citizens in our country. This seems especially the case when preferential treatment is given to some based on their religious identity. 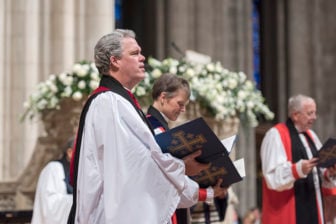 I said at the time of the service that we welcomed Trump to the cathedral because it is a house of prayer for all people. We were honored to host him and many others for an interfaith service of prayer on behalf of our nation.

But I also said that we would not hesitate to voice our concerns when we disagree. I am sad that those disagreements have arisen so quickly, and I am disappointed that the president appears to ignore the voices that have spoken up in opposition to his actions.

Our Judeo-Christian tradition is clear. God commands us to welcome and care for the stranger among us. Deuteronomy teaches us: “You shall also love the stranger, for you were strangers in the land of Egypt.”

Exodus proclaims: “You shall not wrong or oppress a resident alien, for you were aliens in the land of Egypt.”

And the Letter to the Hebrews implores us: “Do not neglect to show hospitality to strangers, for by doing that some have entertained angels without knowing it.”

The teachings of Jesus are grounded in a radical love that seeks to embrace the outcast and the stranger, the hungry and the poor. Jesus tells us that when we love and care for exactly these kinds of people, we are, in fact, loving and caring for God: 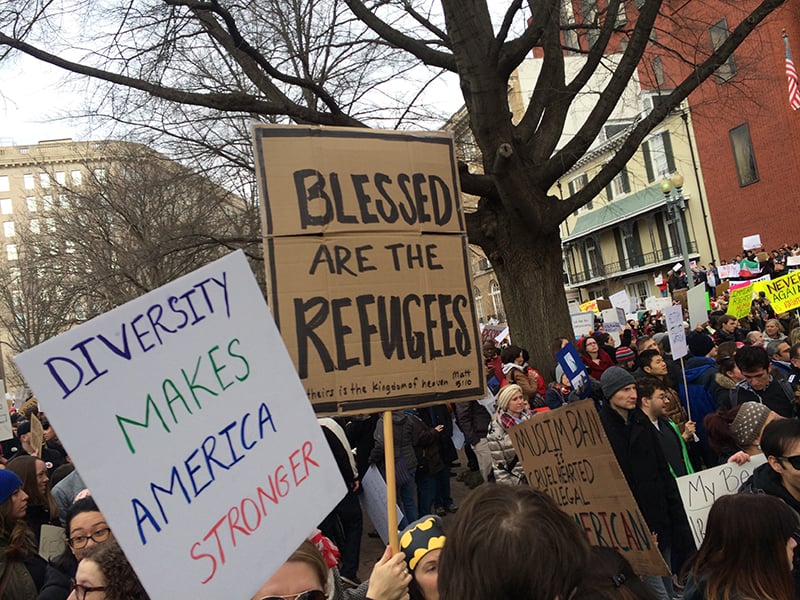 We are a nation of immigrants, and the Statue of Liberty’s enduring promise to welcome “your tired, your poor, your huddled masses yearning to breathe free” is woven deeply into the fabric of our national life.

This executive order does not reflect or express our values to the world, and we cannot rise to the highest ideals of our nation if we systematically sink to our lowest impulses and close ourselves off to good people who seek to be in relationship with us.

Washington National Cathedral is a spiritual home for the nation. More importantly it is a voice for the oppressed, the disadvantaged and those in need. And we are a voice for refugees who look to us for sanctuary.

We will not sit idly by as our nation’s leaders turn their backs on one of the worst humanitarian refugee crises in history.

This executive order, based in fear and prejudice, violates our gospel call to love our neighbors as ourselves. Looking back on the prayer I offered at the inaugural service, we must continue to ask God to “take away the arrogance and hatred which infect our hearts.” At the same time, our prayers should lead us to act in love for all those who would be marginalized or forgotten.

Yes, we need to protect our homeland, but we should never be motivated by xenophobia and bigotry. It is un-Christian and it is wrong. As Christians and as Americans, we are better than this.

(The Very Rev. Randolph Marshall Hollerith is dean of the Washington National Cathedral)

News
EXCLUSIVE: Trump, confirmed a Presbyterian, now identifies as ‘non-denominational Christian’
News
‘Pro-life Evangelicals for Biden’ signers face a fiery blowback
Spiritual Politics
Jewish voters edge further away from Trump
News
In battleground states, American Jews prefer Biden over Trump by a wide margin
News
Rohingya American voters ‘grateful,’ ‘excited’ to cast ballots for the first time in Chicago
© Copyright 2020, Religion News Service. All rights reserved. Use of and/or registration on any portion of this site constitutes acceptance of our User Agreement and Privacy Policy, Privacy Statement and Cookie Notice. The material on this site may not be reproduced, distributed, transmitted, cached or otherwise used, except with the prior written permission of Religion News Service.