WASHINGTON (RNS) President Trump vowed in his first National Prayer Breakfast as chief executive to make good on a campaign promise to repeal the law that restricts political speech from the pulpit.

“I will get rid of, totally destroy the Johnson Amendment and allow our representatives of faith to speak freely and without fear,” he said on Thursday (Feb. 2) to a gathering of 3,500 faith leaders, politicians and other dignitaries from around the world, including King Abdullah of Jordan.

“I will do that, remember,” Trump added.

The Johnson Amendment, championed by then-Texas Sen. Lyndon Johnson, prohibits tax-exempt houses of worship from engaging in partisan politics. They can neither endorse nor oppose candidates or political parties without risking their tax-exempt status.

Repeal of the amendment, passed into law in 1954, is among the list of acts many religious conservatives hope the president will accomplish in his first year in office.

The president’s promise to repeal the amendment came in the midst of a speech that included comparisons of network ratings of the current version of “The Apprentice,” starring former California Gov. Arnold Schwarzenegger, with his own. “I want to just pray for Arnold, if we can, for those ratings,” he joked.

But the president’s remarks turned serious as he described religious liberty as a foundational premise of the United States that is under siege, both here and abroad. 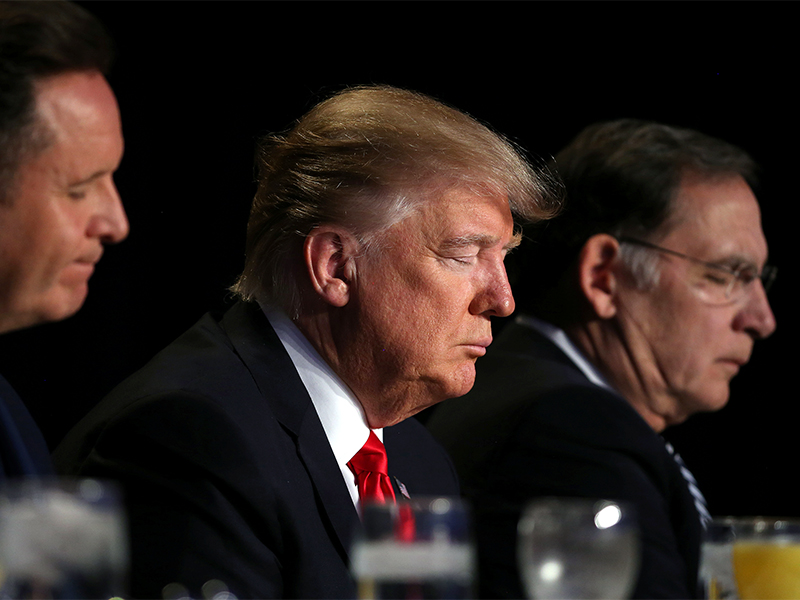 “Freedom of religion is a sacred right, but it is also a right under threat all around us,” he said from a podium in the Washington Hilton’s ballroom. I have never seen that so much and so openly since I took this position.”

He then promised to “fix” that because, he said, “that’s what I do. I fix things.”

The president also addressed immigration, a hot potato since he enacted orders last week limiting travel from seven Muslim-majority countries and pushing for a border wall with Mexico. He seemed to promise that vetting of immigrants will include a probe into their commitment to religious liberty for all.

“We will not allow a beachhead of intolerance to spread in our nation so in the coming days we will be developing a process to determine that those who enter our nation uphold religious liberty,” he said. “ … We will be a safe country, we will be a country where all citizens can practice their beliefs without fear of hostility or fear of violence.”

Cathy Kirley of Minnesota, who attended the prayer breakfast for the third time, said the speech reassured her about the president’s intentions.

“So I really do respect that he’s trying to keep our country safe, and his intolerance for violence is really what drives him to a lot of the actions he’s been taking,” she said afterward.

Michael Wear, an evangelical Christian who was a faith adviser for the 2012 Obama re-election campaign, took part in a “prayerful” protest outside the venue and followed the speech from there.

He said Trump’s promise to repeal the Johnson Amendment was an attempt to deflect attention from his moves on immigration.

“We reject the crass, unjust, uncompassionate policy that he rolled out and we’re going to keep on speaking out about it.”

The president spoke after a rousing sermon-style address by keynote speaker the Rev. Barry Black, a retired Navy rear admiral and the first African-American and Seventh-day Adventist to serve as the Senate chaplain.

Black, in his sonorous bass voice and trademark bowtie, jumped among books of the Bible, ranging from Acts to Zechariah, as he encouraged the assembled — whom he addressed as “my father’s children” — to “make your voices heard in heaven.”

Rabbi Haskel Lookstein, who is close to Trump son-in-law Jared Kushner’s family and who offered an opening prayer, said afterward that he thought the president “spoke very nicely.”

“I think the president does believe in God, which is very much in keeping with the American way of life,” he told RNS. “Not to force religion on anyone, but America is a very religious country.”

A day earlier, a petition signed by 800 Christian faith leaders was published, beseeching Trump to “remember refugees and immigrants have sacred worth in God’s eyes.”

“We pray that you use your office to unite, and turn away from your rhetoric and policy proposals that degrade human dignity,” the petition read. There was also a group of protesters outside the Hilton as the guests arrived.

READ: Christian leaders to Trump: We’re praying for you, but …

The National Prayer Breakfast has been held since 1953, and every sitting president has attended it annually. It is chaired each year by two members of Congress — one from each major party — who meet for prayer. The majority of religious leaders who attend are Christian and the event is organized by a Christian foundation.

President Obama also used his remarks at the National Prayer Breakfast to promote religious liberty. But his remarks were notably different from Trump’s. Obama more than once acknowledged people of no faith as part of the American religious makeup.

“America is a nation of believers,” he said. “So easily we forget this, that the quality of our lives is not defined by our material success, but by our spiritual success. I will tell you that as somebody who has known tremendous material success.”