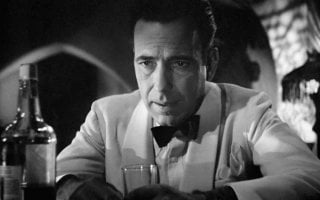 As the Academy Awards ended last night, the entertainment world was stunned as Warren Beatty and Faye Dunaway slipped, awarding the best picture award to "La La Land," when, in fact, the winner was "Moonlight."

For me, the biggest surprise of the evening was that Kenneth Lonergan, winner of the best screenplay award for "Manchester by the Sea," is the greatest Jewish playwright you never knew was Jewish.

With an Irish father and a Jewish mother, the man could have an aliyah this weekend in any Orthodox shul.

So, now I'm thinking about another possible Oscars category: Jewish movies that you never knew were Jewish.

This year marks the 75th anniversary of the classic film. That offers us the opportunity for speculation that "Casablanca" is deeply Jewish.

Its director, Michael Curtiz, was a Hungarian Jew who came to America from Vienna in the mid-'20s.

Its three credited screenwriters are Julius and Philip Epstein (they were twins) and Howard Koch, who would later be blacklisted.

Many of the actors in the film were Jewish.

But, is there more? Many of the refugees in Casablanca could have been Jews.

And, then there is the fanciful speculation that Rick Blaine, played by Humphrey Bogart, was a secret Jew.

In his 1998 novel "As Time Goes By," Michael Walsh suggests that Rick started life as Yitzhak Baline, a Russian Jewish boy from the wrong side of the tracks in 1930s New York. He is in Casablanca precisely because he is aiding refugees from the Nazis, whom he hates viscerally.

In my own imagination, however, Casablanca is far from the only "non-Jewish" movie that doesn't mention Jews or Judaism, but is profoundly, although "secretly" Jewish.

"The Grand Budapest Hotel." Wes Anderson has said that he based his movie on the writings of the quite-Jewish Stefan Zweig.

Where is the hotel located? In Anderson's fictional Republic of Zubrowka, in an imaginary place where the Hapsburg Empire meets the remnant of the Ottoman Empire. Which is to say, a place that would have been heavily Jewish.

The bourgeois guests at the Grand Budapest Hotel would have been Jews -- though the word is never uttered.

"Meet the Parents" and "Meet the Fockers." Jack Byrnes (Robert De Niro) is a sort of WASPy retired CIA agent; Greg Focker (Ben Stiller) is his soon-to-be son-in-law -- who is about as Jewish as we could imagine.

There are only two references to the fact that Greg is a Jew. The first is when Jack invites Greg to say a prayer over dinner, and Pam tries to get him out of it, because he is Jewish (as if Jews don't say prayers over food).

The second is when Pam's ex-fiancé, played by Owen Wilson, describes a wedding altar as a "chuppah" -- with an exaggerated "ch."

What is really going on in these movies? Nothing less than an extended commentary on Jews and gentiles. Greg is a male nurse -- an insufficiently masculine profession that draws the contempt of his soon-to-be father-in-law. Translation: Jack Byrnes -- the gentile spy -- is a "real" man; the Jewish male nurse, Greg, is not.

The sequel, "Meet The Fockers," is a commentary on Jewish vs. gentile sensibilities. Yes, two iconic Jewish actors -- Dustin Hoffman and Barbra Streisand -- play the Fockers. There is also the subtle contrast between the stereotypical WASPy uptightness of the Byrnes couple, and the earthy sexuality and openness of the Fockers.

A totally Jewy pair of movies.

"Dirty Dancing." The word "Jew" is not uttered.

But, like the guests at The Grand Budapest Hotel, who else would have been the patrons of such a Catskill resort?

What is the real subject of the film? Yes, it is a love story. But the love story embraces the contrast between the upper-middle-class, professional Jewish hotel guests, and the working-class gentiles who work and entertain.

Here is the bigger problem: The Jewish resort staff members are vain, ambitious and ethnically shallow.

The working-class gentiles, by contrast, might be rough around the edges, but at least they are honest. And they dance far better than the Jews do; in fact, they have to teach the Jews how to use their bodies better.

Every Marx Brothers film. As Lee Siegel writes in his wonderful analysis of Groucho's comedy, in every Marx Brothers film, Groucho Marx functions as a Jew. It is not only his stereotypically Jewish appearance. His persona is of the trickster, the one who exposes the pretensions of upper-class gentile society.

Siegel writes about how Groucho and the poet T.S. Eliot developed a "bromance" that was marred by the great poet's undisguised anti-Semitism.

And as for assimilation ... there is a scene in "Animal Crackers" in which Chico accosts a wealthy man named Roscoe W. Chandler and finally gets the man to admit that he is really Abie the fish peddler from Czechoslovakia.

And, in the song "Hooray for Captain Spaulding," which hails him as an African explorer, Groucho comes up with a rhyme for "explorer."

Anti-Semites have long suspected that the motion picture industry is Jewish, at its core.