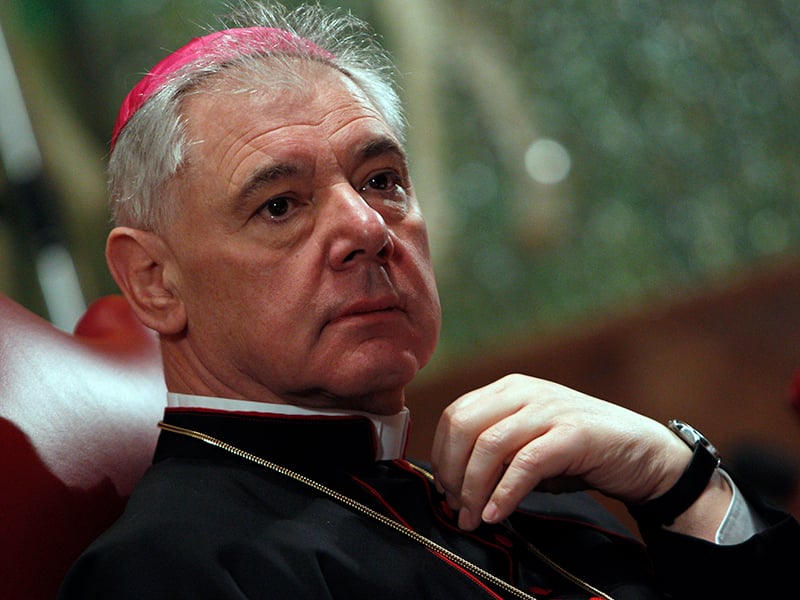 Cardinal Gerhard Mueller, then-bishop of the Regensburg, Germany, looks on during a religious conference at the Vatican on March 11, 2010. Photo courtesy of Reuters/Tony Gentile
March 6, 2017
Josephine McKenna

Mueller, head of the Congregation for the Doctrine of the Faith, a key department of the Roman Curia, made his remarks in an interview with an Italian daily on Sunday (March 5) after Irish sex abuse survivor Marie Collins cited opposition from Mueller's office as the main reason for her resignation last week from the pope’s commission to protect minors.

The interview in Corriere Della Sera was published as the pope joined members of the curia on a Lenten spiritual retreat in the town of Ariccia outside Rome.

“I think you should put an end to this cliché’, the idea that there is on the one hand the Pope who wants reform and on the other a group of resistors who would like to block it,” the conservative German cardinal said.

“It is part of our Catholic faith and the work ethos of the Roman Curia to support the Pope's universal mission, entrusted to him by Jesus Christ. "

Yet later in the interview Mueller appeared to admit that the pope’s 2015 proposal for a specific tribunal to judge the culpability of bishops in clerical abuse had not been implemented.

“There was a proposal but after intense discussion between various departments involved in the fight against clerical pedophilia it was decided that we already have the jurisdiction of the bishops’ dicastery (department), the tools and the legal means to address any criminal negligence by bishops,” he said.

“In addition the Holy Father can always entrust a special case to the congregation.”

Collins last week accused the Vatican of “shameful” resistance to fighting clerical sex abuse in the Catholic Church as she quit a key panel set up by Pope Francis.

She said the pope’s decision to create the Pontifical Commission for the Protection of Minors was a “sincere move” but there had been “constant setbacks” from officials within the Vatican.

“There are people in the Vatican who do not want to change or understand the need to change,” Collins told RNS.

“I find it shameful,” Collins said. “The work we want to do is to make children and young adults now and in future safer in the church environment from the horror of abuse.”

Collins said her decision to resign had been provoked by one Vatican office's refusal to comply with a request from the commission, approved by the pope, that all letters sent to the Vatican by abuse survivors receive a response.

But in his interview Mueller said that “personal contact” with victims was best conducted by local pastors.

“This act of pastoral care is a task of the bishops in their own particular churches and the general superiors of religious institutes that are closer,” said Muller. “If there is a decision by the pope or a specific task, there is no resistance.”