(RNS) More than three months into glioblastoma, I’m having some stimulating conversations.

GBM is a brain cancer with a median survival of about 15 months, so I’m considering my best path to the Egress. And people of many faiths have engaged me in some thoughtful discussions.

He and I have known each other for years. And he does a lot of radio work on the North Texas Christian station “The Word” (KWRD) at 100.7 FM. He invited me to join him for an interview.

Hmm. We don’t much agree on theology.

First Baptist is “an autonomous, independent congregation of baptized believers” that is part of the Southern Baptist Convention.

My perspective is pretty much agnostic Jewish.

Is there a way to kibitz without fighting, if there are strong disagreements?

Too much of what’s out in the media, Twitterverse and Facebookland indicates that it ain’t easy.

But yep, it can really be done. The question of how one deals with a serious illness —medically and philosophically — is a topic that can be explored in a civil way. Talking with Graham was a total pleasure for me because we both were happy to be civil.

And he’s an exceedingly interesting fellow. His church website says he earned an undergraduate degree in leadership from the U.S. Military Academy at West Point and a master’s in divinity from Southwestern Baptist Theological Seminary. He’s done doctoral work in Christian leadership at Gordon-Conwell Theological Seminary. And he served his country for nine years as a field artillery officer in the U.S. Army.

Not exactly the median. Heh.

From his perspective, that of an aggressive evangelical conservative Christian, the Jesus stuff is first priority when he talks to people in my position. He follows the Southern Baptist belief that an embrace of Jesus is the only way to get to the Christian afterlife in heaven.

This season, coming up toward Easter, is prime time for him to focus on the story of crucifixion and resurrection and what Jesus offers according to Baptist theology.

But he also told me that he offers some practical, this-life focus when he talks to people looking closely at their path to the end, “the eternal and the temporal,” he said.

His approach — WWJD, or What Would Jesus Do? — comes from a somewhat different angle than me. But the practical results are not totally different from the kind of guidance I find in Jewish (and other) traditions: What’s a morally good thing to do? Try to do it.

I like some Talmudic tales. He mentioned a New Testament story: the parable of the talents in the Gospels of Matthew and Luke.

This is a Jesus account of a boss who gives money to three servants before heading out on a trip. When he comes back, two have used the money to make some money. One simply saved what he was given. The boss (standing in for the Almighty) praised those who accomplished something and blasted the guy who didn’t even try.I like that perspective. I don’t know exactly what my path to the Egress will be like.Maybe I beat the odds and get more than the median? After all, half live longer than the median by definition. But focusing on the path seems like a good idea now. And I like thinking that there may be a Higher Justification for me trying to continue to accomplish some things that will be considered good when I’m gone.As Graham pointed out, the Jesus of the New Testament was connected to the Judaism of the day. I find it positive to think that differences in theology may allow people to end up in the same positive place, like different paths up a hill.

Maybe the Boss will reward me for my ambition when I hit the exit.

(Jeffrey Weiss is a longtime reporter who covered religion, faith and morality issues for more than a decade. He writes about beliefs and dying in the “My Way to the Egress column” at RNS) 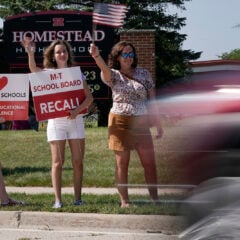