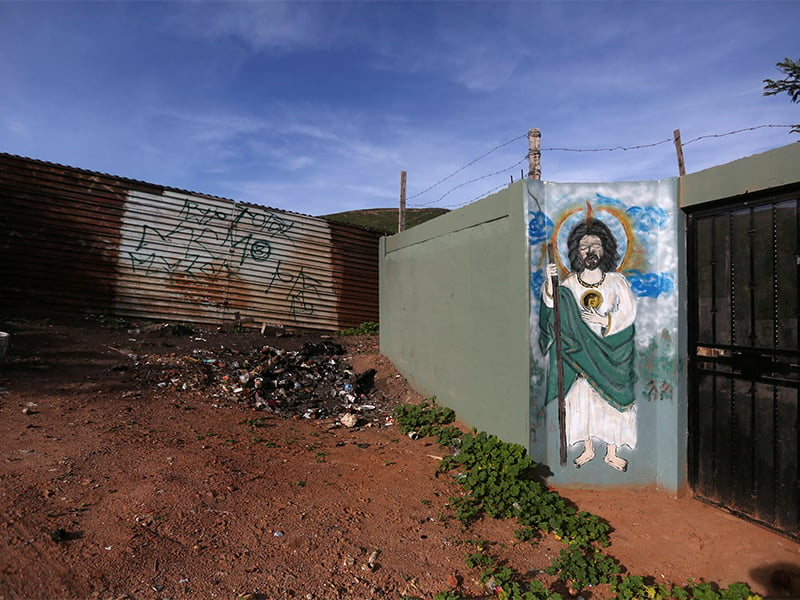 A painting of Jesus Christ is seen on the wall of a house, next to a section of the border fence separating Mexico and the United States, on the outskirts of Tijuana, Mexico, on March 3, 2017. Photo courtesy of Reuters/Edgard Garrido

MEXICO CITY (Reuters) Mexicans who help build President Donald Trump’s planned border wall would be acting immorally and should be deemed traitors, the Catholic Archdiocese of Mexico said, turning up the heat on a simmering dispute over the project.

In a provocative editorial published Sunday (March 26), the country’s biggest archdiocese sought to increase pressure on the government to take a tougher line on companies aiming to profit from the wall, which has strained relations between Trump and the Mexican government.

“Any company intending to invest in the wall of the fanatic Trump would be immoral, but above all, its shareholders and owners should be considered traitors to the homeland,” said the editorial in Desde la fe, the archdiocese’s weekly publication.

On Tuesday, Economy Minister Ildefonso Guajardo warned firms it would not be in their “interests” to participate in the wall. But the editorial accused the government of responding “tepidly” to those eyeing the project for business.

A spokesman for the archdiocese, which centers on Mexico City and is presided over by the country’s foremost Roman Catholic cleric, Cardinal Norberto Rivera, said the editorial represented the views of the diocese.

Trump says he wants to build the wall to stop illegal immigrants from crossing the U.S. southern border. He has pledged that Mexico will pay for the wall, which the Mexican government adamantly says it will not do.

The Desde la fe editorial, which was published online, said the barrier would only feed prejudice and discrimination.

“In practice, signing up for a project that is a serious affront to dignity is shooting yourself in the foot,” it said.

Mexican cement maker Cemex has said it is open to providing quotes to supply raw materials for the wall but will not take part in the bidding process to build it.

Grupo Cementos de Chihuahua, another company specializing in construction materials, has also signaled readiness to work on the project.