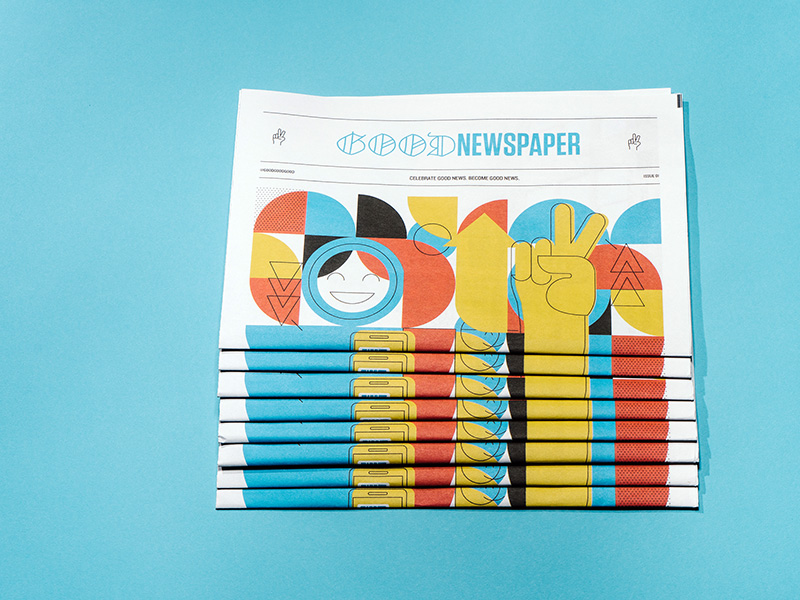 The Goodnewspaper should first publish in May 2017. Photo courtesy of Branden Harvey
April 12, 2017
Emily McFarlan Miller

A number of mass killings and police shootings grabbed headlines in 2016, said Branden Harvey, the usually chipper voice behind the "Sounds Good" podcast. Presidential candidates contributed to feelings of fear and division.

But it also gave him the idea for the Goodnewspaper, a printed newspaper that publishes "good" news stories about people, ideas and movements seeking to change the world for the better.

"We had the opportunity to let it break us, or we could take action," he said.

Harvey launched a Kickstarter page in mid-March to crowdfund the quarterly newspaper. In under three days, it had hit its $26,500 fundraising goal.

And by Wednesday (April 12), with hours left to donate in the project ending Thursday morning, it has raised more than $50,800.

"I think I'm tapping into this movement of people who feel overwhelmed by the bad news in the world. They know there's more out there, they just don't know how to find it, and once they find it, they don't know how to be a part of it," he said.

RELATED: Christian photographer tries Kickstarter campaign for a hotel with a purpose

The Kickstarter campaign "absolutely" will cover all the Goodnewspaper's costs with enough profit to invest in growing the publication, according to Harvey. That includes a part-time staff of six and at least 2,000 issues in its first printing run — possibly as many as 15,000. The paper also is accepting a small number of advertisements, he said, and even those will be from brands that have what he called a "social good message."

It's just the latest of Harvey's "good news" ventures.

In his weekly "Sounds Good" podcast, he interviews fellow optimists about topics like mental health, social justice and using influence for good. He also curates a weekly email newsletter called the Goodnewsletter that links to hopeful headlines from around the world.

But Harvey, originally a photographer, never set out to become a purveyor of good news, he said.

"At this point, it's very evident to me — 'Oh, everything I'm doing is focused on good news' — but it was just kind of one brick at a time of being like, 'Oh, I'm passionate about this thing,' 'Oh, I'm interested in this thing,' and then all of a sudden I looked and all those bricks had spelled out the words 'good news,'” he said.

He's always been a "a hope-focused, optimistic guy," he said.

That's something he said he learned from his grandfather, a Southern Baptist pastor in his hometown of Pullman, Wash. His grandparents always were inviting people over for dinner or to stay with them, and they taught conversational English classes to international students at a local university.

"I feel like a lot of my faith has been really shaped by the examples of others and, most specifically, by the examples of others who used their faith not to restrict and not to build up walls, but to build bridges and connect with people. ... Their faith informs their opportunity to love people and specifically to do it in a creative way that’s geared toward their own unique abilities and talents," he said.

Good news isn't all candy and butterflies and puppies, though, Harvey said. It's not ignoring the bad news and real injustices in the world, he said.

For instance, he said, the Goodnewsletter he sent after the Pulse nightclub shooting in Orlando, Fla., didn't ignore the tragedy. It included links to stories about people risking their lives to save others during the attack and lining up to donate blood to victims.

That's what he hopes the Goodnewspaper will inspire people to do, he said.

Harvey expects to deliver the first issue of the paper in May.