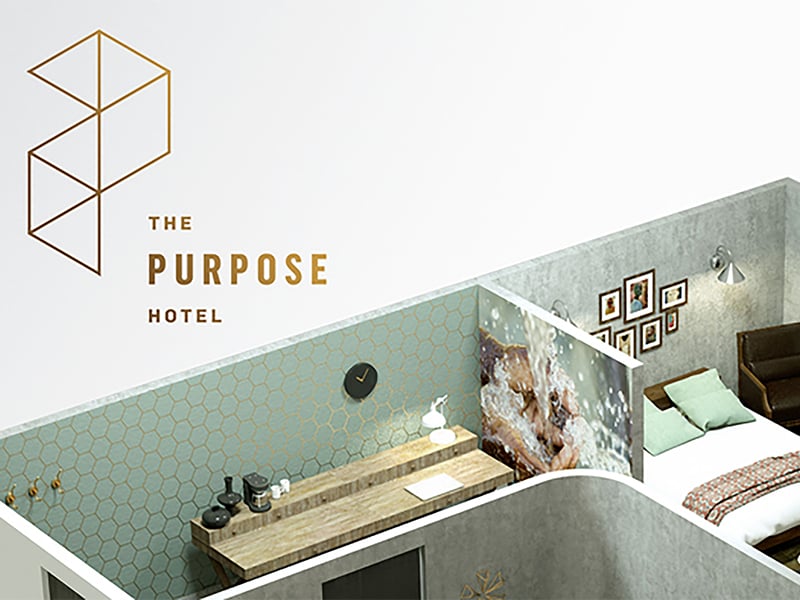 A rendering of a hotel room inside the proposed Purpose Hotel. Photo courtesy of the Purpose Hotel
August 30, 2016
Emily McFarlan Miller

UPDATE: The Purpose Hotel Kickstarter campaign raised more than $757,000 by the time it ended on Friday (Sept. 2), but because it didn't reach its $2 million goal, Kickstarter will return that money to supporters. It will relaunch this week at ThePurposeHotel.com with a "much more achievable goal," Jeremy Cowart said in an emotional Facebook Live video posted over the weekend.

"We are not bummed. All these tears y'all are seeing right now are tears of joy," Cowart said.

"The things that have come from this Kickstarter campaign; the conversations we're having with investors, architects, designers, interior designers; the deals we have brewing all over the world... Amazing things are happening, so, to me, the Kickstarter campaign really did do its job in terms of getting the word out and getting this thing started." 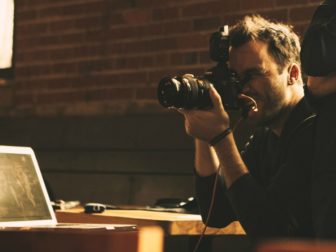 Celebrity photographer Jeremy Cowart behind his camera. Photo courtesy of the Purpose Hotel

(RNS) Photography has taken Jeremy Cowart around the world.

Cowart -- recently featured in Christianity Today's "Makers" issue and named the “Most Influential Photographer on the Web” by The Huffington Post -- has photographed the Passion World Tour in 2008 and Britney Spears' Circus World Tour in 2009.

He's photographed Haitians after the 2010 earthquake, holding pieces of debris on which they'd written their thoughts and prayers, for a photo project that later was displayed at the United Nations.

And he's stayed at a lot of hotels. Which got him thinking: What if a hotel could do more than just provide a place to stay for a night?

That's the idea behind the photographer's Kickstarter for the Purpose Hotel in Nashville, ending Friday (Sept. 2).

"The world knows Christians by our judgment, not by our love, for the most part, and I want to change that. I want to build a hotel where we're working with and inviting people into the hotel of all belief systems and all skin colors and all backgrounds," Cowart said.

Everything in the Purpose Hotel will have a purpose, according to the Kickstarter page. Everything will be connected to a cause or a need -- blankets sewn by survivors of human trafficking, furniture crafted by companies that create jobs for people in need, a fountain in the lobby from the nonprofit organization Charity: Water. Co-working spaces will be used to work for other causes, and conference rooms for humanitarian events.

Cowart has been in talks with a number of well-known nonprofits, including the Giving Keys, Compassion International, Food for the Hungry, International Justice Mission and Thistle Farms. His idea is that part of the proceeds from hotel services would benefit them, or the hotel would purchase goods from them.

"Even though it's not a Christian hotel, it certainly has a lot of core Christian values. It's all about outreach and loving our neighbor and feeding the poor," Cowart said. "I wish a lot of churches out there would follow the hotel model."

The photographer turned to Kickstarter to raise the money to design and plan the hotel, he said in a viral video posted on Facebook and his website, because he believes people "really do want to be the change that they wish to see in the world."

The Purpose Hotel is his biggest undertaking yet -- "my Goliath," he said in the video. But he pointed to a passage from the the biblical book of Philippians that gave him hope as a struggling student: "I can do all things through Christ who strengthens me." He held onto those words as he founded Help-Portrait, a worldwide movement of photographers who take free portraits for those in need, and See University, an online course sharing everything he's learned about photography.

With only a few days left, the Kickstarter campaign is about a third of the way to its $2 million crowd-funding goal. If the campaign falls short, Kickstarter will return the money to donors.

But even if that happens, Cowart said plans for the hotel still will move forward, and he'll relaunch a more modest Kickstarter campaign.

"There are so many negative things happening in the world today," he said. "We certainly need a lot more positive, happy news. I think people want to be a part of something bigger than themselves, and this is a beautiful opportunity to do that."