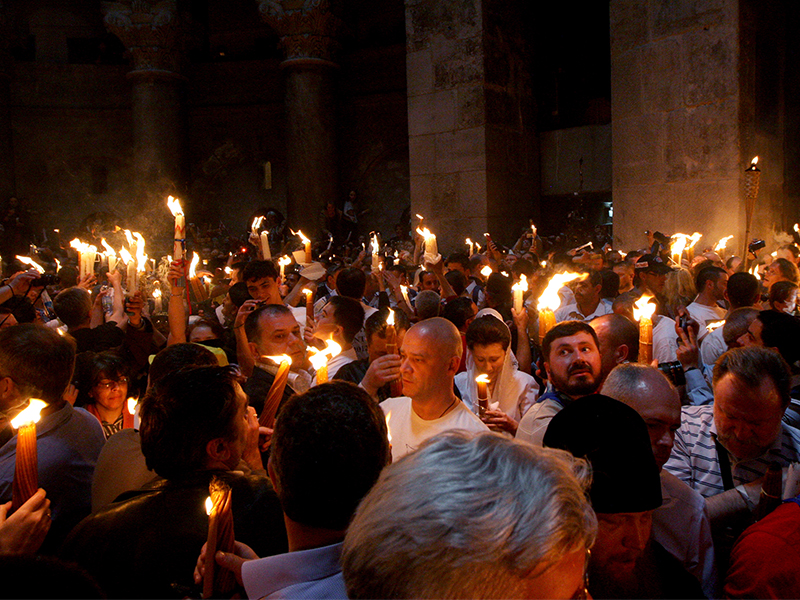 Orthodox Christians participate in the Holy Fire ceremony at the Church of the Holy Sepulchre in Jerusalem in 2012. Photo courtesy of St. Andrew the First-Called Foundation
April 12, 2017
Yonat Shimron

JERUSALEM (RNS) On Saturday (April 15), thousands of Orthodox Christians will crowd the Church of the Holy Sepulchre to watch the Greek Orthodox patriarch emerge from the structure surrounding Jesus’ tomb with two lit candles.

The ceremony, known as Holy Fire, is described by Orthodox Christians as a “miracle” that occurs each year on Holy Saturday, the day preceding Easter. As part of the ceremony, a fire rises from the slab of stone where Jesus’ body was laid after his crucifixion, enough to light  lamps and candles around the church.

Since 2003, a delegation from St. Andrew the First-Called Foundation in the Holy Land, a Moscow-based charitable organization, has flown to Israel to pray for the peace of Jerusalem and bring some of the fire back to churches in Russia.

According to Orthodox tradition, the stone on which Jesus was buried, in what is now the Sepulchre church, emits a light that bursts into flames initially cool enough to touch before turning scalding hot.

During the ceremony, the Greek Orthodox patriarch of Jerusalem enters the Edicule – the newly restored structure that encases the tomb – kneels before the light and then carries it out to the 10,000 expectant pilgrims who greet the appearance of the flames with expressions of joy and wonder.

Prior to the event, the Edicule is searched to ensure there are no lit flames. Then its doors are symbolically sealed with wax, “recalling how the seal and the guard were attached to Christ’s tomb,” said Hegumen Nikon, secretary of the Russian Ecclesiastical Mission in Jerusalem.

The ceremony “symbolically re-creates the gospel events that immediately preceded and followed the moment of Christ’s resurrection,” Nikon said.

Accounts of the Holy Fire date back to the fourth century. In 328, a historian described how, in the year 162, church officials filled oil lamps with water because there was no oil. When a bishop instructed the officials to light the lamps a flame was ignited.

Orthodox Christians deemed it a miracle and, for centuries, a few intrepid pilgrims have succeeded in bringing the flame back to their homeland via dangerous, weekslong overland or sea journeys.

Skeptics say church officials dip the candles in white phosphorus, to make them burn, but there is no proof of this.

Vladimir Yakunin, head of the Russian delegation, said that" although there have been many attempts to deny or refute the Holy Fire they have yielded nothing: "We have no grounds to disbelieve it," he said.

"For example, our delegation of pilgrims often measures the temperature of the Holy Fire just after the miracle of its apparition, when it is passed from the Edicule of the tomb to those in the cathedral. The average temperature of the flame of an ordinary candle is about 1000 Celsius, but that of the Holy Fire in the first seconds after it appears barely reaches 50 Celsius, people are able to wash their hands and faces in it."

Speaking by phone from Moscow, Alexander Gatilin, head of communications for the St. Andrew foundation, said the 100-person Russian delegation will take some of the Holy Fire’s flame to Russia using the same kind of container used to transport the Olympic torch “because ordinarily it is forbidden to take fire on a plane.”

In Moscow, Gatilin said, representatives of dozens of churches and municipalities will be waiting at the airport to transport some of the Holy Fire to their own churches and dioceses throughout Russia. The main torch is delivered to Patriarch Kirill, the Russian Orthodox patriarch, as he conducts the Easter service at Christ the Savior Cathedral in Moscow.

“For millions of people, bringing the holy fire” to Russia “in time for Easter is a symbol of the resurrection of Christ,” Gatilin said. “But our first mission has always been to pray for the peace of Jerusalem, in Jerusalem. We understand that Jerusalem is the heart of Orthodox Christianity and until there is peace in Jerusalem there will be no peace in other parts of the world.”

Yakunin said the Holy Fire ceremony gives him “a special feeling of unity and belonging.”

“It is very different from what we as believers are used to. We are used to churches being places of quiet and contemplation, whereas here there are the cries and drumming from the Orthodox Arabs” celebrating the event along with “tens of thousands of other believers.”

For the delegation members, the ceremony is just the beginning of a sacred journey, Yakunin said. “Our mission in bringing the Holy Fire to Russia, in some senses, only begins then. We head to the airport as fast as we can to board the flight to Moscow, where thousands of people are waiting for us. They come and light their lamps from the Holy Fire and take it to churches in the farthest reaches of the country.”

Only after the flame is delivered to Patriarch Kirill, Yakunin said, “is our mission complete.”