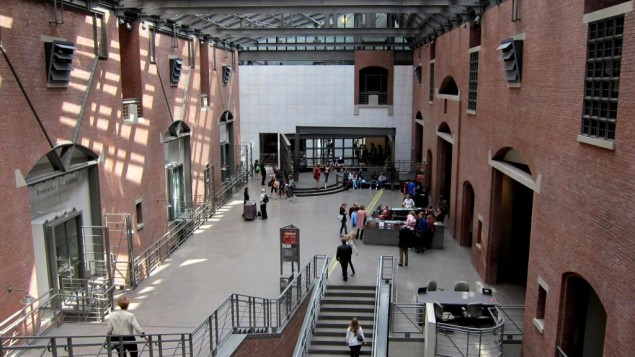 The entry hall of the US Holocaust Museum in Washington, DC
April 26, 2017
Jeffrey Salkin

It is now two days after Yom Ha Shoah, and several days beyond the Trump administration's 100-day mark.

In a word: dismal.

Administration officials have demonstrated a tone-deafness on the topic – from the failure, on Holocaust Remembrance Day in January, to specifically mention Jews as victims of the Holocaust; to Sean Spicer’s clumsy rewriting of Holocaust history; to this administration’s welcome mat to a man with decades-old, well-documented ties to a far-right Hungarian group that supported the Nazis and is on the U.S. State Department “watch list.”

I am referring to Sebastian Gorka (and more on him later).

So, what did Donald Trump say in his speech yesterday at the U.S. Capitol?

Exactly what you would have hoped he would say. Watch the speech here.

He could have been referring to the most recent one: Princeton University, where racist and anti-Semitic leaflets were posted around campus.

The fliers were from a white nationalist organization called Vanguard America, which bills itself as a group for “White Nationalist American youth working to secure the existence of their people.”

Among the charges made on the flier: “Jews are 10 percent of Princeton’s students, an overrepresentation of 500 percent, and 80 percent of the first Soviet government was Jewish.”

Those Jews who were appalled by the president’s appearance at the remembrance ceremony all sounded a common theme — the total disconnect between the man's actions and positions, and what that place represents.

How could a president who has admitted someone like Gorka into his inner circle; who has relationships with people who are connected to the alt-right; who has failed to admit Syrian refugees into this country; who has previously failed to specifically name Jews as Holocaust victims; who has himself trafficked in bigoted rhetoric – why is it appropriate for this man to publicly remember the Holocaust?

I have another question for Trump: How can you express admiration for the French far-right presidential candidate Marine Le Pen — who, just today, said that she would ban halal and all ritual slaughter – which includes kosher slaughter?

So, yes – there are massive disconnects here.

So, why am I not upset that Trump spoke at the ceremony?

As much as I disagree with so much of what Donald Trump has done – and as much as I find his positions, or non-positions, or moral stuttering on Jews and the Holocaust to be utterly lacking – I must remember the mission of the US Holocaust Memorial Museum, which sponsored the remembrance.

That purpose is to commemorate and to educate.

There is a reason why the first stop for foreign leaders who visit Israel has always been Yad Va Shem.

So they can learn what has traumatized, and what continues to motivate, this people Israel.

People far, far worse than Donald Trump — genuine haters, bigots, white supremacists, even — have encountered the realities of the Holocaust. That learning process turned their lives around. They rejected their previous hateful ideologies. They became better people.

I am trying to maintain a spark of faith in human nature and in the potential for human growth.

Call me naïve, but I hope that Trump's presence at the Holocaust memorial might symbolize that he learned something; that perhaps something ignited a spark within him – and that he will actually try to live up to the pledges that he made on that sacred occasion.

But, before we forget, let’s get back to Sebastian Gorka.

I can understand Donald Trump speaking at an event sponsored by the US Holocaust Memorial Museum on Yom Ha Shoah.

Here is what I cannot understand.

This year, that list of invited speakers includes none other than the aforementioned Sebastian Gorka.

Like Jane Eisner in the Forward, I simply don’t get it.

And, also true, he has somewhat strident views on Islam.

But, dear friends at the Jerusalem Post, a newspaper that I have read and enjoyed for years – Gorka?

I can actually live with Trump having addressed the US Holocaust Memorial Museum.

But, as for Sebastian Gorka – as close to a World War II era Hungarian fascist as is currently available inside the Beltway ...

Do Gorka's hard line on terror credentials, and his anti-Islamism, invite the Jerusalem Post to ignore his coziness with those who swept away the Hungarian Jewish community?

Jerusalem Post conference organizers: are you really not getting the disconnect here? Where is your respect for your readers?

Give me a break.