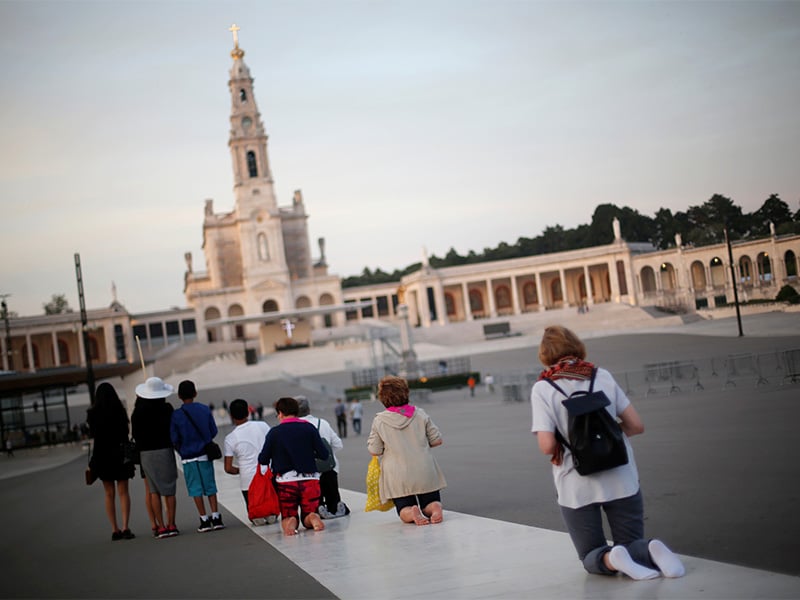 Pilgrims walk on their knees to fulfil their vows at the Sanctuary of Our Lady of Fátima in Fátima, Portugal, on May 8, 2017. Photo courtesy of Reuters/Rafael Marchante
May 10, 2017
David Gibson

(RNS) The ’Splainer (as in “You’ve got some ’splaining to do”) is an occasional feature in which the RNS staff gives you everything you need to know about current events to hold your own at the water cooler.

Pope Francis heads to the Shrine of Our Lady of Fatima in northern Portugal on Friday (May 12) to celebrate the centenary of the first appearances of the Virgin Mary as described by three shepherd children on May 13, 1917.

What were those apparitions and why have they played such a central role in Catholicism over the past 100 years? And what are the so-called "secrets of Fatima," only some of which have been "revealed" by the Catholic Church? Let us ’Splain ...

Fatima is a small city in central Portugal where the landscape is dry and rocky. For centuries, the local people made their living raising sheep and other animals. Then, in May 1917, three shepherd children — two girls and a boy — claimed they saw an apparition of the Virgin Mary. The children described Mary as “a lady dressed all in white, more brilliant than the sun.” Mary told the children that praying the rosary would end what was then called The Great War — World War I to us — which by its end a year later left 17 million dead and 20 million wounded.

According to the children, Mary appeared to them six times that year. In one appearance, Mary said a miracle would occur on Oct. 13, 1917. Initially the children were scolded and even threatened with death for spreading what were considered baseless stories. But pilgrims from all over the world gathered in Fatima on that date and awaited Mary's appearance. In what came to be called the "Miracle of the Sun," many reported seeing visions in the sky while others reported miracles of healing. A newspaper of the day reported, “Before their dazzled eyes the sun trembled, the sun made unusual and brusque movements, defying all the laws of the cosmos, and according to the typical expression of the peasants, ‘the sun danced’.”

In 1930, the Catholic Church declared the events at Fatima "worthy of belief," and chapels, sanctuaries, shrines and other memorials to the events popped up.

Some people wonder about a connection to Islam because the village has the same name as the Prophet Muhammad's favorite daughter. Legend has it that the village was named after a Moorish princess who converted to Christianity as Muslim rulers were driven from Portugal during the Reconquista.

Why do Catholics travel there?

When the church declared the Fatima apparitions worthy of belief, it said pilgrims who travel there may obtain a special blessing as well as pray for healing or other special intentions. Today, Fatima attracts between 5 million and 6 million pilgrims a year, making it one of the most popular shrines in the world. The largest numbers come on May 13 — the anniversary of the first apparitions. Pope Francis' visit will coincide with the 100th anniversary of the apparitions.

Francis will be the fourth pontiff to visit Fatima; Pope Paul VI marked the 50th anniversary in 1967, John Paul II went three times and Benedict XVI visited once, in 2010, according to The Associated Press.

What are the 'Secrets of Fatima' and why are they secret?

Lucia dos Santos became a Carmelite nun and, in 1941, wrote her memoirs. In them, she said Mary gave the children three secrets, or prophecies, two of which she revealed at that time. The first secret was a vision of hell that Mary showed to the children, full of lakes of fire with screaming souls in torment. The second was that World War I would end — it did, a little more than a year after the children saw their first apparition — and that another great war would come if the people of Russia were not converted to Catholicism. They weren't, and World War II began in 1939. There was also a prediction that Russia would "spread her errors throughout the world," which many believe is a reference to Soviet communism.

Sister Lucia wasn't eager to share the third prophecy, but was compelled to write it down in the case of her untimely death. She told Rome the secret  could be revealed in 1960, but the Vatican decided to keep it sealed to avoid inflaming the wild speculation that was already connected with the so-called Third Secret of Fatima. Sister Lucia died in 2005 at age 97.

In 2000, then-Pope John Paul II — now St. John Paul — ordered the secret published. The prophecy turned out to be an apocalyptic vision of a terrible persecution of Christians, including priests and bishops and in particular "a Bishop dressed in White" who was killed by soldiers as he knelt before a cross at the top of a hill.

The publication hardly dampened the fervor over the Third Secret since the assassination attempt against John Paul took place on May 13, 1981 — the Feast of Our Lady of Fatima — as he rode around St. Peter's Square wearing his white cassock, the traditional vestment of the Bishop of Rome. It seemed like a near-fulfillment of the prophecy and John Paul said that he believed the Virgin Mary saved his life by guiding the bullet past a major artery. He later sent the bullet to Fatima where it was placed in the crown of the original image of Our Lady of Fatima, fitting perfectly into the only empty space left available when the crown was made 40 years earlier.

Even now, however, there are conspiracy theorists who believe that the Third Secret has not been published in full, or that there is in fact a Fourth Secret of Fatima. Pope Francis is expected to try to tamp down such ideas and focus on his trip as a simple spiritual "pilgrimage" focused on personal conversion.

That's a message that Vatican has been trying to connect to the Fatima apparitions for years in an effort to shift attention away from the more sensational claims and interpretations.

"Insofar as individual events are described, they belong to the past," Cardinal Joseph Ratzinger — later Pope Benedict XVI — wrote in an authoritative text accompanying the publication of the Third Secret. "Those who expected exciting apocalyptic revelations about the end of the world or the future course of history are bound to be disappointed. Fatima does not satisfy our curiosity in this way, just as Christian faith in general cannot be reduced to an object of mere curiosity. What remains was already evident when we began our reflections on the text of the 'secret': the exhortation to prayer as the path of 'salvation for souls' and, likewise, the summons to penance and conversion."

(Filipe Avillez, writing from Portugal, contributed to this article)