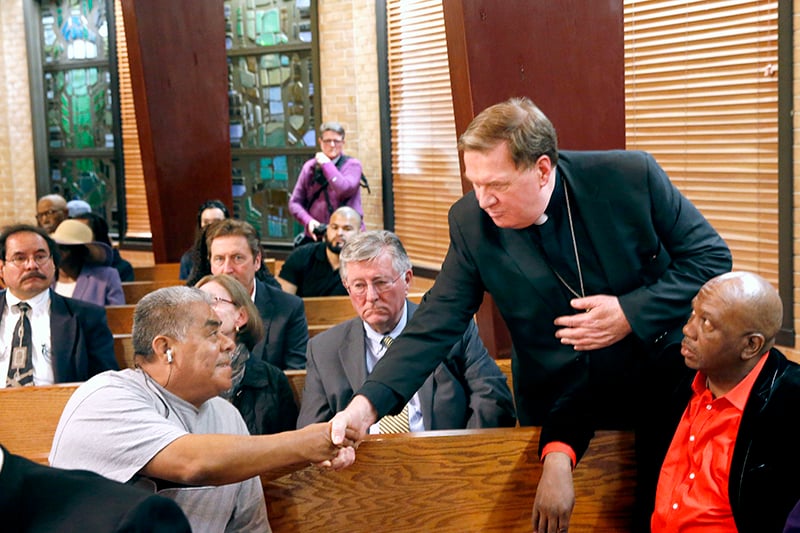 Catalino Guerrero, 59, greets Cardinal Joseph Tobin of the Catholic Archdiocese of Newark during the Faith in New Jersey program at Bethany Baptist Church on May 4, 2017, in Newark, N.J. Photo courtesy of NJ Advance Media/Aristide Economopoulos
May 17, 2017
David Gibson

NEW YORK (RNS) As the nation’s capital buzzed about President Trump’s latest tweets and political fate, a Catholic cardinal who is one of the hierarchy’s most visible champions of undocumented immigrants blasted Republicans for ignoring immigration reform and “inflicting cruelty on innocent people.”

“Now think about it, especially right now, with apparent one-party rule in our government: Congress and the president could pass comprehensive immigration reform tomorrow if they wanted to,” Cardinal Joseph Tobin of Newark told an audience of journalists meeting in Brooklyn on Wednesday (May 17). “They could bring nearly 12 million people out of the shadows — if they wanted to.

“Because after all – and let’s be serious – this isn’t about border security. This is about being attentive to the reality of people who are already in our communities, most of whom are functioning even in their marginal shadow existence and making contributions to their communities,” said Tobin at a conference sponsored by the Diocese of Brooklyn to mark the Catholic Church’s annual World Communications Day.

“A person unbound by Christian charity,” he added, “would say that you really have to believe in inflicting cruelty on innocent people to choose to support the policies (on immigration) we've seen in recent months while possessing the power to change the law.”

Last October, Pope Francis stunned church observers — and Tobin himself — when he named Tobin, then archbishop of Indianapolis, a cardinal. Francis next transferred Tobin to Newark, a much larger archdiocese in terms of population but one that had never had a cardinal.

The moves were viewed as putting a churchman who is very much in the pastoral mold of Francis himself in a more prominent and influential role.

Tobin has always made it a priority to help the marginalized, and in 2015 he clashed with then-Indiana Gov. Mike Pence — now Donald Trump’s vice president — over Pence’s effort to stop the settlement of Syrian refugees in the U.S. Tobin ignored Pence’s order and continued to resettle refugees who had gone through a rigorous screening process.

Tobin’s move to the New York media market plus Trump’s harsh rhetoric on immigrants have combined to give the cardinal’s statements and actions even greater resonance.

That was demonstrated in March when Tobin joined an interfaith delegation accompanying Catalino Guerrero, a 59-year-old Mexican native who had lived and worked in the U.S. for much of his life after entering illegally as a young man, to a hearing to determine if Guerrero would be deported.

Guerrero, who is ill, was eventually granted an extension.

Tobin said Wednesday that one purpose of that effort was to “put a face on people who are frequently dehumanized” or simply viewed indifferently, if at all, by the rest of society.

“Racism today is not a bunch of people riding on horses dressed in bedsheets, burning crosses and annoying people,” he said. Racism, he said, “is just not seeing. Or, if you see, you don’t understand.”

But Tobin said the other purpose of the demonstration on Guerrero’s behalf was to “put a face on us and the call to solidarity” — that is, on the witness of people of faith.

“When I accompanied Mr. Guerrero to his deportation hearing, it’s impossible to deny that I brought with me the trappings of the office [that] Pope Francis sprang on me last fall,” Tobin said.

“Whatever those trappings are,” he continued, delivering an implicit challenge to his peers in the church, “it doesn’t change the nature of grace. What if every cardinal accompanied an undocumented person who crossed our paths to the deportation hearing? What if every bishop did? Every pastor? Every mayor?

“Of course,” he said, “these aren’t the people in our society who have been vested with real power to make a positive difference in our country’s immigration policy. Those would be the members of our Congress and our president.”