(RNS) It is jihad, again. “This is for Allah,” shouted the attackers, before they “stabbed a girl 10–15 times,” according to a video of an eyewitness.

Responding to June 3rd’s London Attacks, British Prime Minister Theresa May said there was “far too much tolerance” of Islamist extremism in the U.K.

Many Muslims worldwide were ready to sincerely condemn the horrifying attacks in London, affirming Islam does not support such atrocities against civilians.

This is a new wave of terrorism in London.

Three “Islamist militants” drove a van across the London Bridge at 50mph, killing at least seven and injuring more than 48, before they continued driving to Borough Market, where they began “randomly stabbing” victims.

This terrorist attack took place less than two weeks after “an Islamist suicide bomber killed 22 people including children at a concert” in Manchester in northern England, and almost two months ago, “a man killed five people after driving into pedestrians on Westminster Bridge in central London.”

But, what on earth could drive these attackers to commit such horrible deeds?

It is their conception of jihad, especially if you consider this is Ramadan, the holiest Muslim month.

Whether you consider these attackers evil lunatics or genuine believers is not the issue. We cannot underestimate the call to “jihad against the unbelievers,” which is found in the ancient sacred texts.

Jihad, as a term, is an Arabic noun, meaning struggling and striving, found in the Quran and Muhammad’s sayings (hadith) hundreds of times. Jihad, as a sacred command in the Quran, occurs explicitly more than 28 times in its singular and plural form. In most cases, it is linked with fighting for the cause of Allah.

However, what likely drives attackers, such as those in London is an understanding of jihad that existed throughout the past 12-centuries of Islamic interpretation: Jihad as striving in Allah’s path by destroying the unbelievers.

According to the Quran, “Not equal are those believers remaining (at home) — other than the disabled — and the mujahideen, (who strive and fight) in the cause of Allah with their wealth and their lives.” The word “strive” in Arabic is a form of jihad.

For those London attackers, armed jihad and attacking enemies are sacred duties. They see themselves devout and adhering to the literal message of the most sacred text, the Quran. In a sense, they are following Allah’s command to Muhammad: “O Prophet, fight (form of jihad) against the disbelievers and the hypocrites and be harsh upon them. And their refuge is Hell, and wretched is the destination.”

Attackers wholeheartedly believe, “The believers are only the ones who have believed in Allah and His Messenger and then doubt not but strive (form of jihad) with their properties and their lives in the cause of Allah.”

When attackers wage jihad against what they view as unbelievers, they are observing the command, “So do not obey the disbelievers, and strive (form of jihad) against them with the Quran a great striving.”

In Ramadan, the holiest Muslim month, jihad becomes a necessity. Instead of devoting time to worship and reciting the Quran, militant Muslims see the streets of London as full of evil and nudity. For them, all those non-Muslims are infidels and unbelievers, against whom jihad is prescribed, commendable, and supported by ancient sacred texts.

(Ayman S. Ibrahim is an assistant professor of Islamic studies and director of the Jenkins Center for the Christian Understanding of Islam at the Southern Baptist Theological Seminary) 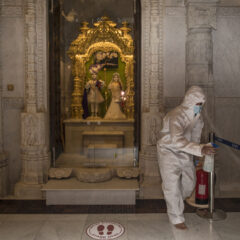 News
Pandemic reshapes worship across the UK’s many faiths
Follow us on Facebook!
Submit your photos to RNS