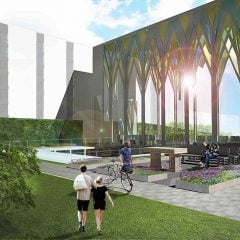 Matthew Hoffman and Lisa Pisseri use the garden metaphor to create sacred place for the community, giving the neighborhood green space. A private garden behind the chapel promotes connection with nature, signifying the biblical location of humans’ first encounter with God. Image courtesy of Catholic University of America 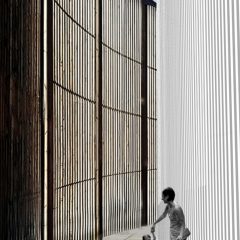 Emily O’Loughlin and Megan Gregory’s project includes a shelter for women and the homeless, those whom they describe as spiritually underserved. A hallway provides a sense of journey and gracious welcome with its high ceiling and natural light. Image courtesy of Catholic University of America A rooftop garden in the design by Ugochukwu Nnebue and Sina Moayedi offers views to the east at sunrise. Image courtesy of Catholic University of America 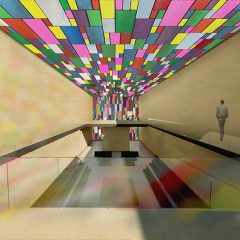 Pilgrimage as a way of discovering the sacred is at the heart of Devon Brophy and Madeline Wentzell’s design, in which a labyrinth occupies much of the site, leading to a sacred space contained by stained glass. Image courtesy of Catholic University of America 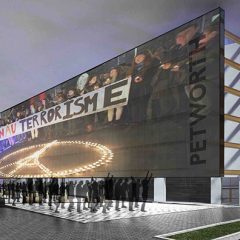 Joseph Barrick and Ariadne Cerritelli conceive of this new spiritual place as a way to interact with the people around the globe, through a variety of media, such as a large screen visible from an open plaza. Image courtesy of Catholic University of America 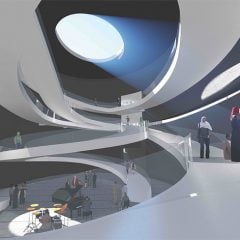 Spiral ramps lit by natural light from above form the heart of the Ugochukwu Nnebue and Sina Moayedi design, which embraces many of the world’s religions and takes as its theme “giving and receiving,” which they note is at the core of human love. Image courtesy of Catholic University of America

(RNS) Over the past few decades the concept of a “church” — in fact, of all kinds of religious buildings — has been shifting, some might even say radically transforming, because of big changes in people’s attitudes about religion.

Surveys by groups such as Pew Research and Trinity College have shown a precipitous drop in people who belong to organized religions, particularly in the Christian and Jewish faiths and among those under 35.

Today the largest single segment of the population in the U.S. describes itself as “nones”: affiliated with no organized religious group. People of all ages are turning away from organized religion but they are not necessarily choosing to be atheists. It seems like they are looking for a more genuine, personal experience of the spiritual in their lives. Many call themselves “spiritual but not religious.”

As architects ourselves and as teachers of future architects, we wonder what a house of worship in the future will look like.

Do we even need a building to be religious, to be spiritual, to practice our belief? Is there a future for religious architecture at all?

We put that question to a group of architecture students at the Catholic University of America in Washington. The big transformations in spiritual belief are being led by millennials, people just like our students.

We asked them to reflect upon their own experiences with organized religion, their own beliefs and the “search” for a new kind of church they might be engaged in. We shared demographic info about how religion is changing in America. We then picked a site in Washington for which the students could design a new kind of house of worship.

The students revealed a willingness to greatly broaden the definition of what happens inside a house of worship, and why it was important to them.

Students found new opportunities to define a sacred place in such activities as performing music or making art; in moving their bodies through space in the medium of dance; in digitally connecting with people and events around the globe; in sharing with and caring for other human beings through the concept of “giving and receiving”; in creating a safe place for women who are victims of domestic violence; in landscape and nature serving as a setting for contemplation, reflection and celebration; in providing support to those seeking to strengthen their bodies and spirits through nutrition and exercise.

Conventional ideas about houses of worship were pretty sparse.

The new house of worship’s “design program” (the kind of spaces included) evolved from the students’ ideas about where the sacred might be found. The designs reflect some of the elements of contemporary ideas about spirituality, with a combination of places for the spirit, places to share community, places for outreach, places for creation and performance, places for gathering in worship and ritual, places to share meals and fellowship (like pubs or coffeehouses). The program was flexible in the sense that the students could decide how much space to devote to different functions and activities.

Because this was not a single-use building, but multifaceted in its spaces and functions, it should offer opportunities to design “in cathedral.” The term “in cathedral” was coined by author and educator Elizabeth Drescher and explored by Keith Anderson in his recent book, “The Digital Cathedral” (Morehouse, 2015). Being “in cathedral” recognizes the sacred in everyday life, in everyday places, the network of relationships among neighbors and even strangers, and the witness of believers beyond the confines of an enclosed sacred space. These new designs should be “in cathedral” with the surrounding neighborhood and the people who live there.

The search for the sacred through the design studio assignment resulted in what we think are some provocative, challenging schemes of what the new houses of worship might look like as religion in America continues to change. In fact, we had to admit that we, as design critics (of the boomer generation), might not be ready to accept the new kinds of sacred places and spaces that the students might develop.

When the students presented their projects there were a few debates between students and teachers about what could or should be considered sacred and what wasn’t. It was at that point that we realized that the design project to design a new house of worship had achieved some measure of success: to challenge and confront the idea that a religious building should be static and unchanging; to consider that every generation needs to ask and try to answer what it is, or what it might be.