(RNS) It’s bad news for organized religion: A majority of the religiously unaffiliated — the so-called “nones” — say they fell away from faith not because of any negative experience, but because they “stopped believing,” usually before the age of 30.

Gloomier still for religion is this — nones now make up 25 percent of the American population, making them the single largest “faith group” in the U.S., ahead of Catholics (21 percent) and white evangelicals (16 percent).

And only a fraction — seven percent — say they are looking for a religion to belong to at all.

Those are among the more salient findings of a new study of the religiously unaffiliated conducted by the Public Religion Research Institute. 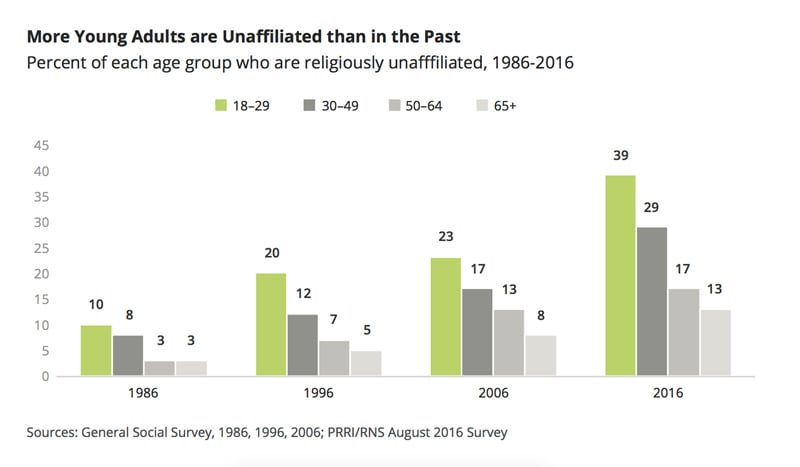 “More Young Adults are Unaffiliated than in the Past.” Graphic courtesy of PRRI

The study challenges the assumption that the unaffiliated are leaving religion because they are offended by religious institutions’ treatment of gay and lesbian people or clergy sex abuse scandals, said Daniel Cox, PRRI’s research director.

“Those things matter but they are dwarfed by this central idea that people no longer believe in religious teachings,” he said.

READ: The ‘nones’ are more numerous than you think, and they aren’t going to the polls

Even the study’s title is a downer for the devoted — “Exodus: Why Americans are Leaving Religion — and Why They Are Unlikely to Come Back.” Here are some of the central findings of the survey of 2,201 adults that was conducted in late July and early August and has a margin of error of plus or minus 2.5 percentage points.

But the study, released Thursday (Sept. 22), is full of interesting contradictions, too. While only one-fifth of all nones say morality is fostered by belief in God, one in three believes children should be raised in a religion to learn “good values.”

And while one third of all nones say they do not believe in God, only a fraction — 13 percent — accept the label “atheist.”

“There is still stigma attached to the word ‘atheist,'” Cox said. “I think there is a disinclination to claim the label if they are nonbelievers who just don’t think about religion all that often.” 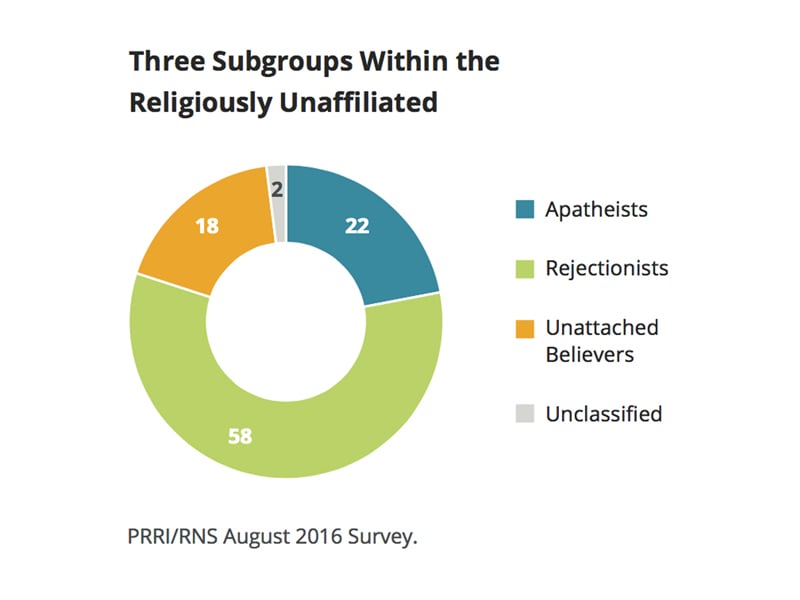 “Three Subgroups Within the Religiously Unaffiliated.” Graphic courtesy of PRRI

The study attempts to further define nones by dividing them into three subgroups — the “Rejectionists,” the “Apatheists” and the “Unattached Believers.” 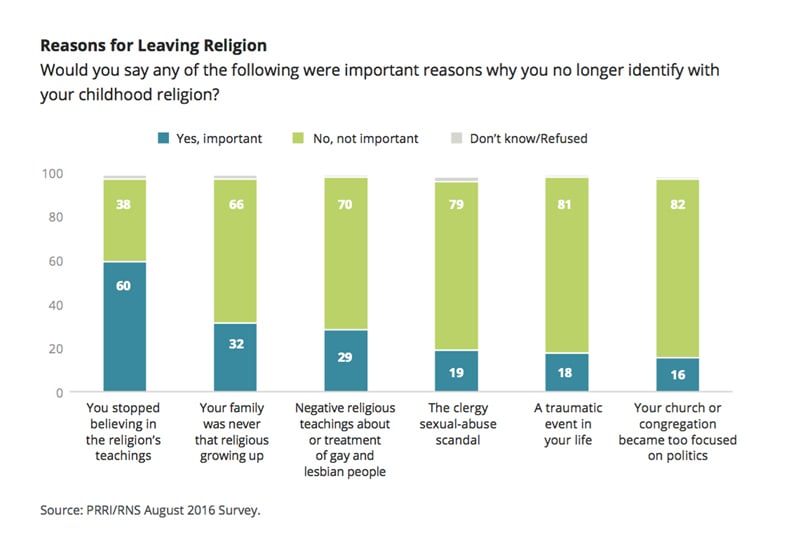 “The way religious education and formation is set up in mainline and Catholic churches parallels high school,” she said. “Once you graduate from it, you got it. You know, don’t be a jerk, do unto others, and nones just kind of get bored with it and move on.”

But what do they move on to? Katherine Ozment is the author of “Grace Without God: The Search for Meaning, Purpose and Belonging in a Secular Age” and a none who simply drifted away from her childhood Presbyterianism.

“It’s not that nones don’t believe in God, it’s that they don’t believe in religious teachings,” she said. “They have detached completely from religion and are finding meaning in their jobs, in raising kids, in their communities, in nature.”

But many, she said, still want a sense of community they once found in church. She believes that’s behind the fast and recent rise of so-called “atheist churches” like Sunday Assembly and Oasis, which now have branches across the U.S. and in several countries.

“I think there are a lot of nones who miss singing in the choir, who would love to go into a building and hear a moving speech, but the minute someone starts talking about the Bible they check out,” she said. “It no longer feels applicable to them. That’s a big challenge to the church.”

Ed Stetzer, the executive director of the Billy Graham Center for Evangelism at Wheaton College and an expert on evangelicals and leadership, agrees.

While evangelicals know how to appeal to nominal Christians — those who still identify as Christians but don’t practice — they do not have the same success relating to the nones, he said. “So I think ultimately there will have to be some retraining about what it means to reach secular people.”

Stetzer takes heart from the study’s finding that more than half of all nones say they believe in some concept of God.

“That’s where the entree is,” he said. “There is still an awareness that there is a God and the Christian’s job is now to explain who that God is and what he has done for them.”

The PRRI poll, conducted in partnership with Religion News Service, was funded by the Henry Luce Foundation and the Stiefel Freethought Foundation.