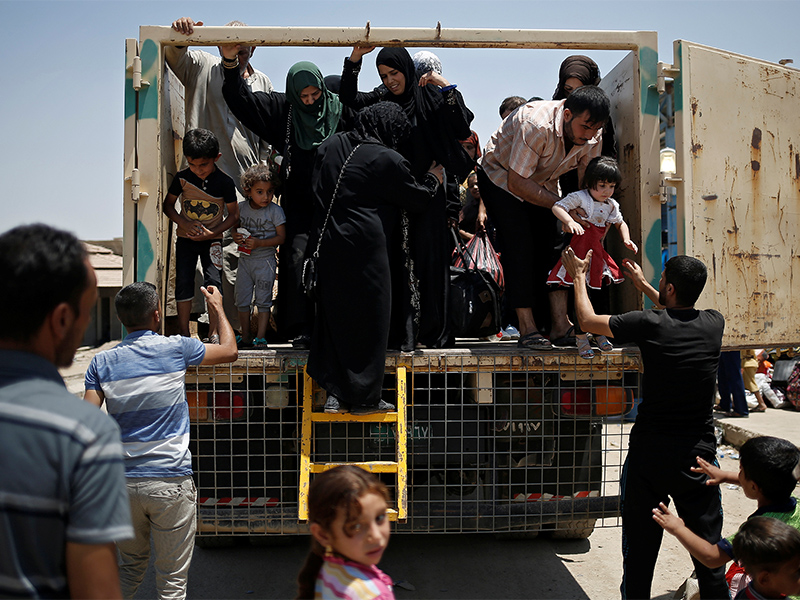 Civilians fleeing the fighting between the Iraqi forces and Islamic State militants arrive at a processing center before being transferred to refugee camps, in western Mosul, Iraq, on June 19, 2017. Photo courtesy of Reuters/Alkis Konstantinidis
June 20, 2017
Tim Breene

(RNS) Economist Friedrich Hayek famously wrote, "Without a theory, the facts are silent but, with a theory or ideology, inconvenient facts can become invisible.”

This is how, Hayek explained, societies enter into a kind of “willful blindness.”

So it is today with the refugee crisis.

Our society too easily equates the admission of refugees into this country with the threat of terrorism, largely because the policy has become a partisan ideology, not because this viewpoint is substantiated by facts.

Ever since Yale psychologist Stanley Milgram's 1961 experiments in obedience, we have known that, without reward and punishment, most people will commit unethical acts when asked to do so by someone in authority.

Milgram’s experiments, repeated with similar results around the world, showed, in his words, "the capacity for man to abandon his humanity — indeed the inevitability that he does so — as he merges his unique personality into larger institutional structures.”

Time and again we have seen this loss of moral compass in the face of institutionalized ideology lead to devastating consequences, whether in the Rwandan genocide, the collapse of Enron, or Lehman Brothers and the subprime crisis that followed.

In each case, people chose to ignore truths that could have averted these crises. The narrative they wanted or needed to protect became their truth despite the opposing facts.

In our own time, many have expressed national security concerns with refugee resettlement. We appreciate these concerns but believe they are misplaced.

Refugees are victims fleeing regimes that have committed unbelievable atrocities. They are not terrorists. Returning home is not a realistic near-term or even midterm prospect for most.

Curtailing refugee resettlement not only diminishes our long history of leadership in this area but also runs counter to the biblical mandate to “love and welcome the stranger,” repeated 36 times in the Old Testament and illustrated so powerfully in Jesus’ parable of the Good Samaritan.

“Resettlement initiatives help advance U.S. national security interests by supporting the stability of our allies and partners that are struggling to host large numbers of refugees.”

To understand how they reached this conclusion, it’s important to understand that refugees compose approximately 0.1 percent of entrants into the U.S. each year and they are, by far, the most highly vetted group of immigrants. There are many easier ways to smuggle nefarious actors into the U.S.

Second, no refugee has ever killed an American in a terrorist attack on U.S. soil since the establishment of the program in 1980.

Third, parallels with the dire situation in Europe are misleading because of Europe’s porous borders, more easily accessible by land and water, and the sheer numbers of those arriving on its shores. These factors impose a security challenge many times the scale of that faced by the U.S. Moreover the much-publicized acts of terror in Europe have been committed largely by nationals radicalized in country — not by refugees.

Closing our doors to refugees while simultaneously cutting off funding for other host countries does not keep us safer but risks creating a vacuum our adversaries will likely fill.

Those left without relief are more vulnerable to starvation, disease and death but also radicalization, torture and persecution. In fact, at least 5,700 fewer persecuted Christians will be allowed to come as refugees to the U.S. this year despite the president’s stated concern for persecuted Christians.

At a time of unprecedented migration, we must put action behind our long-held national belief that welcoming those fleeing the violence of war and oppression is not only the right thing to do, but also the smart thing to do.

We can be encouraged by Scripture that reminds us God, who “watches over the foreigner and sustains the fatherless and the widow” (Psalm 146:6), also “gives sight to the blind,” even the willfully blind.

On this World Refugee Day, we have an opportunity to open our eyes to the truth. All we have to do is be willing to see.