In this column I offer a completely unscientific set of impressions about characteristics of today’s teenagers. It is based on a weeklong immersion experience with my Decatur, Ga., church’s youth group, currently on retreat together in rainy Panama City, Fla. I welcome reader feedback on this one.

Think about this amazing thought: just about everybody in the group was born in the 21st century. If kids are 16 today, they were born in 2001! So they have no memory of 9/11. Even the financial crash of 2007-2008 occurred when most were too young to be aware of it. I wonder how much their consciousness has been shaped by historical events at all.

What they mainly seem to be shaped by is an encyclopedic knowledge of contemporary music and online reality. In the six-hour van ride south, I was struck by how pretty much every kid knew every word of every song that came from every music collection that we sampled from multiple iPhones.

Our savvy youth minister had the kids play a competition game called “Name That Meme.” There were 24 memes, most of which the kids could guess within two seconds simply from a verbal description. They knew not only what the meme was but what it’s agreed name was, like Grumpy Cat or Mannequin Challenge.

Here is where I really felt old. Most every generation has had its favorite songs that everyone memorized. But these odd little snippets from YouTube, Twitter, and other expressions of virtual reality are a new kind of cultural product. Almost all of them were entirely unknown to me, while being embedded in the brains of at least most of the teenagers.

I would also like to congratulate Apple on their complete conquest of our teenagers. I didn’t see phones from any other provider. I didn’t see many kids without phones. And I saw once again that the only way to get phones out of most kids’ hands is to ban them. That kind of market domination is an extraordinary achievement in any field. Of course, it is deeply worrisome in a great number of ways. But facts is facts. Apple rules.

Here’s some happy news: Our kids seemed totally and unselfconsciously inclusive racially. They are real easy with each other across racial lines, almost as if the lines no longer exist for them. I thank God for where they are on this. They have much to teach their elders.

On the religious front, of the two dozen kids on our retreat, I asked, and only about half expressed any real familiarity with the Bible prior to the retreat. Some of the kids who admitted lack of familiarity had grown up in church, but apparently hadn’t been taught much. But to the credit of our church kids, they also brought a bunch of friends with them who had no religious background or experience.

At least for the South, this feels new to me: the completely “unchurched” kid, with no community, family, or cultural force giving them any familiarity with the Bible or Christianity at all. So as I was trying to teach a Bible overview in five sessions, I had to adjust on the fly and start almost entirely from scratch: Here is how the Bible is organized, here is how the system of book/chapter/verse works, here are the main sections of the Bible, here’s the whole Israel and the Church thing, etc.

So those of us attempting to communicate Christian faith to a new generation are facing a situation where Christianity is for a majority no longer the “language spoken at home.”  Ariana Grande, Beyoncé, Ed Sheeran, and the meme of the week are this generation’s native language, while everything else is a second or third language.

This is a very, very different cultural situation from that which prevailed when most Americans were taught some kind of religion from childhood.

To the very great credit of our group, they seemed to learn eagerly and to want to master what I was teaching them. Especially when we set things up as a competition — they love to compete with each other and with themselves. I had forgotten how much that was part of my adolescence as well.

But the challenge is daunting. How do we communicate the Christian faith in such a way that kids will care enough to first make the effort to learn this new language, and then decide that they want it to become the central language in their own life? Are we attempting a direct challenge to the mainstream culture that is wired directly into their brains via their earbuds, or are we merely supplementing it with a new addition? And in a cultural moment relentlessly tuned to the new and latest, how do we make a 2,000-year-old religion seem anything other than musty and ancient?

Two things seem immediately clear. First, we cannot let old, irrelevant Bible translations block the understanding of the Bible’s content when we do get the precious chance to have kids read the Bible. No more King James Version, ever.

Second, we have to draw meaningful connections between what is going on in their lives and what is said in the Bible. Job’s question about why innocent people suffer, Ecclesiastes on whether life is really meaningful, Song of Solomon on romantic passion, and the prophetic cry for justice, Jesus’ teachings about love of God and neighbor — these and much more still speak if we know how to help students draw the connections.

The last time I attempted to do youth ministry was in 1986. Ronald Reagan was president.

But you know what? It is still precious work. I still seem able to talk to teenagers. (That’s a relief.) And there is so much to learn from these ambassadors from tomorrow’s America. 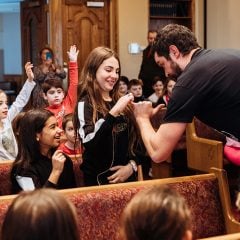 Martini Judaism
When clergy ask themselves: does it really matter? 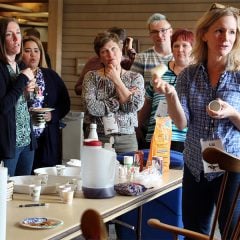 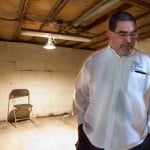