(RNS) Not long ago, I had a conversation with a friend who is struggling with a different set of medical problems. Maybe they’re treatable and maybe not.

At one point in our kibitzing, he went through the possibility of losing his quality of life and becoming a burden to his family and those who love him. If that happened, he said, he’d check out. His consideration of suicide came across as depressing to him.

I told him that the possibility of my eventual checkout actually cheers me up. The conversation reminded me of how I first came to a direct feeling like that: a wonderful book by Walker Percy, “Lost in the Cosmos: The Last Self-Help Book.”

My medical issue is not trivial. I’m more than six months into a diagnosis of glioblastoma, a brain cancer. The median survival is about 15 months. I may last somewhat longer and I may not. At the moment, though, my quality of life remains pretty good.

Loss of some physical strength? Yep.

I’m on chemo and a hefty cocktail of prescription and nonprescription pills recommended by my expert and aggressive neuro-oncologist. I have no idea how much help any of it will offer.

But at the moment, I’m still capable of doing many things I find satisfying.

And this is an unusual fatal illness: Many people who are diagnosed stay in reasonably good shape until shortly before they hit their Egress. So I could remain in a mentally strong condition, without pain, until it’s clear that my path is near its end. In that case, I intend to consider not waiting for the suffering. Like my friend said he’s thought about, I intend to flip my own “off” switch.

But that possibility is the opposite of depressing, for me.

Percy was a Southern Catholic who wrote fiction and nonfiction. His first novel, “The Moviegoer,” won the National Book Award in 1962. He died in 1990 and the New York Times obit said, “Mr. Percy, who grew up in Alabama and Mississippi, said his favorite theme was ‘the dislocation of man in the modern age.’” 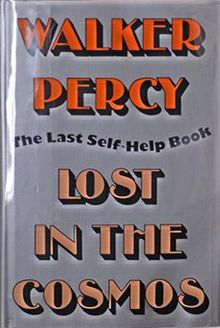 “Lost in the Cosmos: The Last Self-Help Book” by Walker Percy. Image courtesy of Creative Commons

Percy converted to Catholicism before he became a writer. And he followed the Catholic teaching that opposes suicide. He died of cancer without pushing the timing.

Published in 1983, “Lost in the Cosmos” folds dark humor and satire with serious questions about where we should sit, intellectually and spiritually, in the cosmos.

What should we do? How should we decide? Are there choices that are inevitable?

The book is, no kidding, a fun read if you have any interest in the topics he approaches — a great ride with many more questions than answers.

One section starts with this:

“Thought Experiment: A new cure for depression: The only cure for depression is suicide. This is not meant as a bad joke but as the serious proposal of suicide as a valid option. Unless the option is entertained seriously, its therapeutic value is lost. No threat is credible unless the threatener means it.”

His personal bottom line is that he’s opposed to suicide for himself. But for others? A potential bonanza.

“Now notice that as soon as suicide is taken as a serious alternative, a curious thing happens. To be or not to be becomes a true choice, where before you were stuck with to be.”

Stuck with “to be” means stuck with however much suffering there will be until the unavoidable end. Having the choice means you get to decide how much suffering will be acceptable.

As I told my friend, thinking about that now is not signing a contract with Satan, where you will have no choice at the end. If the level of suffering I fear now turns out not to be as bad as I’d feared, then I need not check out as early as I have considered.

Maybe I’ll end up with an all-natural path? That will be up to me.

Percy ends this section with a description I’ve never forgotten and it’s helped me subconsciously every day since last December when my surgeon told me what he’d pulled out of my head.

Here’s how Percy compares those who have and have not considered controlling their exit:

“The non-suicide is a little traveling suck of care, sucking care with him from the past and being sucked toward care in the future. His breath is high in his chest.

“The ex-suicide opens his front door, sits down on the steps, and laughs. Since he has the option of being dead, he has nothing to lose by being alive. It is good to be alive. He goes to work because he doesn’t have to.”

It is good for me to be alive. I’ll stick with it smiling, inshallah, as long as that’s true.

News
Tony Evans: On his new Bible and commentary, Kirk Franklin boycott, wife’s health
Opinion
Battle lines form over social justice: Is it gospel or heresy?
Follow us on Facebook!
Submit your photos to RNS