I’ve heard many progressive Christians make the case for feminism using the Bible. But I’ve never heard a bona fide conservative Christian do it. That is, until Wendy Alsup.

She is honest about the way some traditional readings of the Bible have harmed women. But she contends that the Christian scriptures, rightly understood, are pro-woman. Rather than relegate women to subservience and second-class status, she says, the Bible affirms the equality and humanity of women.

Some progressives will be tempted to dismiss Alsup’s more conservative views. She believes, for example, that wives should submit to their husbands and that certain church leadership roles are reserved for men only. But respective to some of her colleagues and counterparts, Alsup’s views are refreshingly honest and balanced. Here we discuss why she believes the Bible is pro-woman and the troubling passages that have led many to the opposite conclusion.

RNS: Many people believe that the Bible, or at least traditional readings of the Bible, cause harm to women. What are the trickiest and most troubling passages?

WA: The hardest stories involve sexual violence against women. I particularly struggled with the rape of Dinah in Genesis 34. Her story ends with no resolution, redemption, or hope. Eventually, God gave Moses laws to restrain similar violence against women, but those laws, at least at a first reading, don’t feel redemptive or hopeful either. And later stories in Scripture, such as the rape of the concubine of Judah in Judges 19, show that such sexual violence continued despite laws against it.

It’s interesting to me to talk with Christians who in theory know their Bibles but are unaware of some of these stories in its pages. Since these aren’t the stories that pastors tend to use in Sunday sermons (Joseph or Ruth, for instance, seem much more inspiring sermon subjects), many women quietly struggle to reconcile these passages on their own. 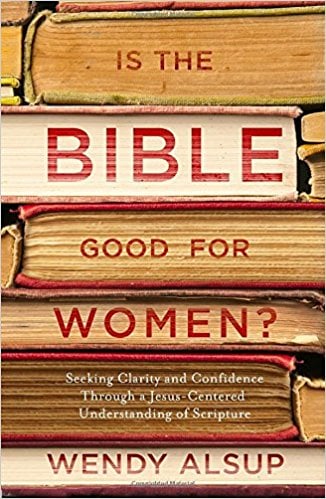 RNS: But you say that some of the Bible’s key passages addressing women have been misunderstood. What’s an example?

There are two in Judges, the sacrifice of Jephthah’s daughter in Judges 11 and the rape of a concubine in Judges 19, that some have viewed as the Bible sanctioning violence against women. Judges ends with a phrase that is helpful: “In those days there was no king in Israel; everyone did what was right in his own eyes.” At this point in the history of Israel, God’s children have forgotten God’s Law and turned to other gods. Despite having laws that should have restrained such sin, a woman is gang raped and murdered in a city filled with men doing what is right in their own eyes, not what is righteous according to God’s Law.

In Galatians 3, the Apostle Paul is clear about the limitations of the Law. At best, it was a tutor that showed us our need for the one true King, the king that Israel needed in the book of Judges, King Jesus. When we understand that the harsh stories in Scripture are often showing us why we need redemption and that our anguish reading them is because we are made in God’s image, we have a great key for understanding many hard passages toward women.

RNS: The Bible says that wives should submit to their husbands. It’s right there in black ink on white paper. What do you say to Christians who accept this as a rule by which to live?

WA: I’m fairly conservative in that I accept those commands as still part of God’s good instructions for us today. But I note that in Scripture, everyone is called to submit to someone. Husbands too must be submitted to authority in their lives. My concern isn’t with pastors who teach that wives need to submit to their husbands, but those who don’t also submit to their own spiritual authority as well.

Submission goes horribly wrong when an authority acts autonomously. Just as our nation needs checks and balances in its political system, individuals with authority in God’s household need it as well. In my experience, abuses arise when someone wants to be an authority without simultaneously submitting to the authority God has put in their lives.

RNS: You promote something you call “God’s feminism.” What is this and how is it different from popular notions of feminism?

WA: Gloria Steinem famously defined a feminist as anyone who recognizes the full equality and humanity of women and men. In that sense, God was the first feminist. He is the one who taught us that woman was created in God’s image, which is the very essence of humanity if you believe in God as Creator.

Though such equality of humanity seemed the focus of early waves of feminism, later waves have focused more on autonomy than humanity. This is seen in the abortion debate, as women fight for autonomy over reproduction that mirrors what men have had for thousands of years. Instead of women seeking sexual autonomy that mirrors a man’s, in the household of God, we should be calling men to sexual responsibility that mirrors a woman’s. God calls us to hold the full humanity of man and woman in community, each laying down their rights for the other.

WA: Those that are threatened by any talk of distinctions risk losing the benefits of the nurturing strong help women can particularly gift the Church. Do women have to operate as men in order to be considered fully human in the Church? Why do you need women in the Church if they bring nothing distinct from men to the table?

I operate more in the other group, those that seem threatened by overlap between men and women. I often hear the dreaded “slippery slope” argument, the fear that if you give women an inch more responsibility in the church, they’ll take a mile. This has deeply harmed conservative churches. They become so fearful of going “too far,” they don’t use the gifts of women in their congregations as Scripture allows and promotes. They have no place for the Deborahs, Phoebes, or Priscillas of the Body of Christ, which demoralizes gifted women or pushes them out of the church completely.

RNS: What do you think the Bible teaches about women in church leadership and pastor roles?

WA: As I study the Bible, I see a consistent theme through Scripture, that at every turn in the story of God’s people, the gifts of women are necessary and vital.  Some offices are limited for women, such as priest in the Old Testament and elder in the New Testament.  Other roles are open for women, such as prophet, deacon, and perhaps even apostle (depending on how one reads the account of Junia).  Regardless of your views of church government, the example of both the Old and New Testament is that women’s voices and gifts are crucial in God’s household, the community of faith.  A woman who is submitted to the authority of Scripture will benefit the Body of Christ wherever her gifts are valued and developed, and when her gifts are ignored, the Church is harmed.

Opinion
Calling all women: It’s time to take our stand together against tyranny and injustice
News
Citing Scripture, Pence switches out Jesus for the American flag in convention speech
Opinion
It’s about time: Kamala Harris and America’s desperate need for women in high offices
General story
Trump was right. God can be hurt. But not by Biden election, say theologians
News
Apt Bible passage at Catholic Mass coincides with earthquake
© Copyright 2020, Religion News Service. All rights reserved. Use of and/or registration on any portion of this site constitutes acceptance of our User Agreement and Privacy Policy, Privacy Statement and Cookie Notice. The material on this site may not be reproduced, distributed, transmitted, cached or otherwise used, except with the prior written permission of Religion News Service.