OKLAHOMA CITY (RNS) — As music plays softly and the Quail Springs Baptist Church prepares to sing “Jesus Is Tenderly Calling,” the guest speaker urges the crowd to bow and pray.

“Here’s my very simple invitation,” the fill-in preacher tells the congregation. “There’s a God who loves you and will walk with you through some very difficult things. Are you interested in coming to know him?”

What makes this one unusual is the person behind the pulpit: U.S. Sen. James Lankford, R-Okla., a rising political star who mixes a boyish, Opie Taylor-like face with a booming, bass voice.

“He’s one of the most respected members of the Senate, even though he’s only been there two years,” said Sen. Angus King, a Maine independent who caucuses with the Democrats. “He’s deeply respected on both sides of the aisle.”

But each weekend, the former youth pastor flies home to Oklahoma and worships with the Quail Springs church, a large Southern Baptist congregation in this Bible Belt state capital. Here, the senator insists, he’s not “The Honorable James Lankford.” He’s simply “James,” husband of Cindy and father of Hannah and Jordan.

When senior pastor Hance Dilbeck went on vacation this month, he asked Lankford to preach at all three morning services on two straight Sundays. Lankford didn’t hesitate to oblige.

Likewise, Lankford turned to his faith when a gunman opened fire June 14 on the Republican congressional baseball team: Lankford prayed on the Senate floor for House Majority Whip Steve Scalise, R-La., and three others who were wounded.

Despite Lankford’s increasing national prominence, the 49-year-old lawmaker says he remains more a pastor than a politician.

“This feels more like home,” Lankford says as familiar church members line up to greet him after the service, telling him they pray for him and encouraging him to remain strong.

A nudge from God

In 2010, Lankford — who earned a Master of Divinity degree from Southwestern Baptist Theological Seminary in Fort Worth, Texas — was a political neophyte.

For 14 years, he had directed Falls Creek Youth Camp, a Bible camp that each summer draws more than 50,000 young people to southern Oklahoma.

But through months of Scripture reading and prayer, Lankford said he and his wife felt God nudging them to “get ready.”

Get ready for what? He had no idea — until he read in the newspaper that then-Rep. Mary Fallin was giving up her U.S. House seat to run for governor.

“I just remember leaning back in my chair, and I had this overwhelming sense,” Lankford said of the spiritual clarity he felt.

Add his prowess at social media — Facebook, Twitter and YouTube — extensive connections with the state’s roughly 650,000 Southern Baptists and his willingness to do his homework and educate himself on the issues, and he created an unbeatable formula.

“All across Oklahoma, in all our Baptist churches, they all knew him,” said the Rev. Anthony Jordan, executive director-treasurer of the Baptist General Convention of Oklahoma, a statewide association of 1,800 congregations. “While he is supported by far more than Baptists, he had a core group of people who encouraged and passionately worked for him.”

Supports Trump, not his tweets

After just four years in the House, Lankford was elected in 2014 to fill the final two years of former Sen. Tom Coburn’s unexpired term.

Then, in November 2016, Lankford breezed to a full six-year Senate term, receiving 68 percent of the vote, topping the 65 percent support President Trump got in the dark-red Sooner State.

But while Lankford and Trump both won Oklahoma big, their approaches to politics could not be more different.

Trump is brash and willing to spew venom on his political enemies. Lankford stresses the importance of treating everyone with dignity: “Every person is created in God’s image and has value and worth regardless of their political party.”

Nationally, white evangelical support for Trump surged even as some high-profile evangelicals, including Southern Baptist Russell Moore, railed against Trump’s behavior toward immigrants, women and other groups as un-Christian.

But Lankford’s emphasis on kindness and civility has kept him from fully embracing Trump or the anger-fueled movement that propelled him into the White House. In October 2016, Lankford told a Tulsa Regional Chamber luncheon that he would “go to bed grieved” on Election Night, regardless of which presidential candidate won.

“He’s definitely sincere about his faith, and it’s absolutely a guidepost in his public service,” said Sen. Kirsten Gillibrand, D-N.Y., a Roman Catholic who joins a weekly bipartisan Bible study with Lankford and other senators.

Just last week, at a Fourth of July parade in the Oklahoma City suburb of Edmond, a gray-haired gentleman wearing a patriotic T-shirt and a steel-building company cap shook Lankford’s hand and commented on the media’s negative treatment of Trump.

“He can bring it on himself sometimes,” Lankford told the man. “He loves a scrap.”

Lankford characterizes himself as a supporter of Trump and the vast majority of the president’s policies. At the same time, the Oklahoma senator has not been shy about voicing objections, particularly on Trump’s use of Twitter.

That dual role — support for the Republican president and criticism of him — has been evident this summer.

In the wake of former FBI Director James Comey’s testimony before Congress, Lankford appeared to go easy on Trump. The senator told the media Trump’s request that Comey back off the investigation of former national security adviser Michael Flynn was “more like an inappropriate conversation than obstruction” of justice.

But after Trump tweeted June 29 about MSNBC “Morning Joe” co-host Mika Brzezinski “bleeding badly from a face-lift,” Lankford responded: “National and local leaders, including our President, should model civility, honor, and respect in our political rhetoric. The President’s tweets today don’t help our political or national discourse and do not provide a positive role model for our national dialogue.”

King — the Maine senator — said he and Lankford often disagree on issues, but he appreciates his friend’s thoughtful manner.

“There’s too much partisanship in the Senate, too much demonizing of one another,” said King, an Episcopalian who is a part of the weekly Bible study. “It really helps to get to know each other as people or Christians or Jews or whatever. One of my favorite sayings is, ‘You can’t hate someone if you know the names of their kids.’ And I’ve met James’ daughters and his wife; he’s met my wife. I consider him to be a very, very valued friend.”

No politics in this sermon

As Lankford sees it, politics don’t belong in the pulpit.

“When I preach, it is just the Gospel and the truth of Scripture, and we’ll walk through that together,” he said.

Why then did Lankford — joined by Louisiana congressman Scalise — introduce a measure earlier this year to let houses of worship speak freely about electoral activity without running afoul of the Internal Revenue Service?

The senator said the Free Speech Fairness Act addresses the shortcomings of the Johnson Amendment, a 1954 law named for then-Texas Sen. Lyndon B. Johnson. Trump signed an executive order May 4 gutting enforcement of the law.

“The Johnson Amendment needs to go away because it’s unconstitutional,” Lankford said. “Now, there are people who say churches shouldn’t talk about politics. I completely agree with that. But it’s a different thing to say ‘should not’ as opposed to ‘could not.’ … We shouldn’t limit their speech or have anyone on the outside say this certain group can’t speak.”

On this Sunday at church, Lankford stays true to his word. He avoids any hint of partisanship.

However, he can’t help but relate his assigned sermon topic — stress — to his work in Washington.

“My wife can gauge my stress level by how pretty the backyard is this season,” he tells the church. “Because for me, when I come home back from D.C., I’m typically out in the backyard, pulling weeds, pruning, planting and puttering around. And if the yard looks really good — which, by the way, it looks really good this year — she’ll say, ‘How about your stress level right now?’”

Then he delivers the punch line: “The backyard is one of those places I can work for several hours and turn around and say, ‘Look, something actually got done!’”

The congregation laughs and applauds, as Lankford opens his Bible and — for the next 30 minutes — puts the focus on Jesus. 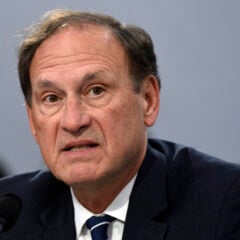 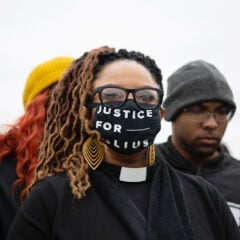 News
Cece Jones-Davis continues support for Julius Jones, whom she helped get off death row
Follow us on Facebook!
Submit your photos to RNS