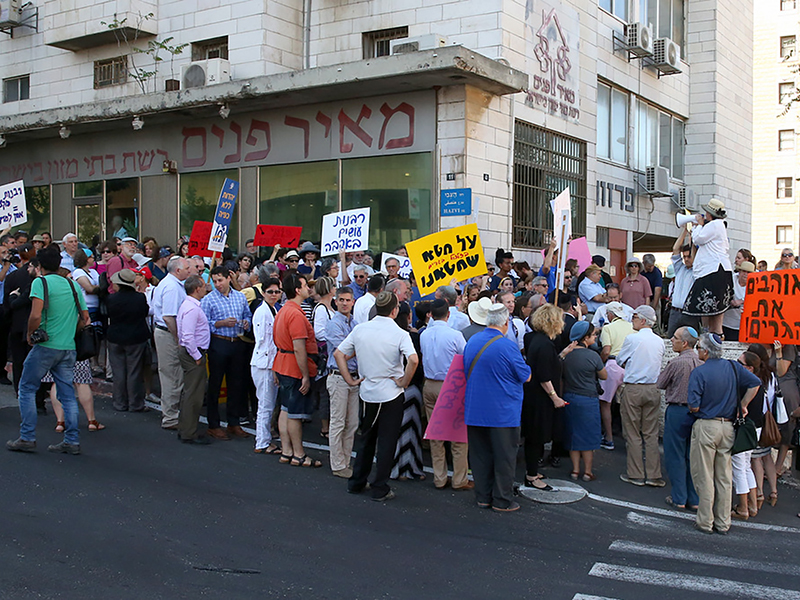 Two hundred people demonstrated outside Israel’s Supreme Rabbinical Court on July 6, 2016, to protest the Chief Rabbinate’s refusal to recognize the authority of one of the most prominent Orthodox American rabbis. Photo courtesy of Ezra Landau for ITIM
July 16, 2017
Yonat Shimron

JERUSALEM (RNS ) — Rabbi Yehoshua Fass, a well-known American Orthodox rabbi, got the shock of his life a few days ago when he learned his name was on a so-called blacklist drawn up by Israel’s Chief Rabbinate.

“Never in my lifetime has my rabbinic ordination been questioned, nor any of the rabbinic documentation that I have historically provided to the Rabbinate,” Fass wrote in a widely shared Facebook post.

Although Fass, who subsequently contacted one of the chief rabbis and received “a sincere apology” and written clarification that his status “is not in question, or ever was,” he nonetheless expressed concern for the other rabbis on the list.

“How do we help the other rabbis, many of whom don’t have a personal relationship with the Chief Rabbinate and don’t have advocates within Israel (to) defend their reputations?” Fass asked.

The list, which includes the names of 160 rabbis from several countries outside Israel, is "the latest indignity suffered by Diaspora Jews at the hands of Israel’s ultra-Orthodox religious establishment,” said Rabbi Seth Farber, a Modern Orthodox rabbi and vocal critic of the rabbinate’s bureaucracy and lack of transparency.

ITIM, the organization Farber heads, obtained the document, which it calls a “blacklist,” under Israel’s Freedom of Information Law.

Many American Jews hold Prime Minister Benjamin Netanyahu responsible for what they consider the rabbinical establishment’s growing influence in the public sphere.

Last month, under pressure from his ultra-Orthodox coalition partners, Netanyahu backtracked on the cabinet’s promise to create a pluralistic prayer space at the Western Wall that would be on par with the existing Western Wall and maintained by liberal Jews.

The same week, a cabinet committee approved a bill — now frozen — that would ban private conversions and grant the rabbinate sole authority to perform conversions in Israel.

Netanyahu “caved” into demands from the country’s ultra-Orthodox political parties “in order not to risk his own power,” Friedman wrote.

Religious coalition partners have threatened to force new elections if the government tries to erode the religious establishment’s authority.

“It could be that there was just one signature on a ketubah,” or Jewish marriage contract, “when two were required. The list doesn’t relate to the rabbis … or to conversions,” Alter said, insisting that “when examining requests for approval of marriage certificates the Chief Rabbinate does not rely on this list and it does not affect the department’s work.”

“If the documents were rejected, that’s a rejection of the rabbis who signed them,” he said.

For more than a decade, Farber has demanded that the rabbinate — a government agency that has sole authority over Jewish marriage and divorce — reveal which Diaspora rabbis it recognizes and the criteria it uses.

Knowing which rabbis the rabbinate recognizes and why is vital, Farber said, because the rabbinate requires all Jews wishing to marry in Israel to provide documents proving their Jewishness.

While native Israelis typically present their parents’ rabbinate-certified marriage certificates, the rabbinate requires those without this documentation to provide other proof, such as a letter from a rabbi attesting to their Jewish status.

The problem, Farber said, “is there are no criteria” for what constitutes an acceptable document, from an acceptable Diaspora rabbi. While some can successfully present alternative documents, many are forced to marry abroad because the rabbinate won't grant them permission.

Alter admitted that the rabbinate “has no criteria,” but said a rabbinic council is in the process of drafting some.

Farber said the rabbinate, like many religious institutions around the world, has become much more stringent over the years. Documents it would have accepted 15 years ago, even from the blacklisted rabbis, are now being rejected.

Rabbi Dan Ornstein, a Conservative rabbi on the list, believes the rabbinate “shouldn’t be the final arbiter of Jewish status. This is not a power a government should put into the hands of a religious body. It’s bad for democracy; it’s bad for pluralism.”

But as long as the rabbinate does wield this power, Ornstein said, “it needs to keep its list-making to itself. You put someone’s name on a ‘bad list,’ it gets leaked, so what kind of a toxic atmosphere do you think that creates?”

Rabbi Jason Herman, a Modern Orthodox rabbi on the list, doesn’t expect his reputation to suffer from the inclusion.

“I was actually a bit amused since I saw my name among so many respected colleagues," he said. "It just seemed like something ridiculous going on in the rabbinate’s bureaucracy.”

But Herman is angry that such a list exists at all.

“It angers me that couples planning the happiest day of their lives need to stress over how to prove their Jewishness without any real direction,” Herman said.