WASHINGTON (RNS) —When Capitol police drew my hands behind my back and took me into custody for protesting Sen. Mitch McConnell’s now-failed health care bill on Capitol grounds, I was certain my arrest, and that of the 10 other clergy and activists who stood beside me, was necessary.

In the fight to ensure that more than 20 million Americans don’t lose the lifesaving care they so desperately need, people of faith have to be willing to lay their bodies on the line.

Moral leaders from coast to coast are taking extraordinary means to ensure that Congress does not repeal the Affordable Care Act entirely and delay implementation of a new, yet-to-be-drafted law, the so-called “repeal-and-delay” strategy.

Nonviolent civil disobedience was used during the civil rights movement of the 1960s to usher in a new era of justice for African-Americans who had been too long denied. Nonviolent disruptors such as the Rev. Martin Luther King Jr., Diane Nash, Ella Baker and Ralph Abernathy literally demanded to be heard.

We know that civil disobedience is not just an organizing tactic from a bygone era. It is our prophetic duty.

After last week’s arrest for “crowding, obstructing or incommoding,” according to Capitol Hill Police, I was reminded of four things that I must do as a person of faith:

1. I cannot sit in a pew on Sunday morning only to forget that Jesus said, “Take up your cross and follow me.”

As a white woman with health insurance, I could hide behind the law, the pulpit or my desk and do advocacy as usual. But I refuse. It is time to start agitating. Our democracy is failing when it allows a death bill to move forward unwanted by the majority of American people, paid for by corporate lobbyists and rammed through without debate and without dialogue.

2. There comes a time when our systems and our laws are so unjust that we have to respond to a higher moral law and pay the consequences.

Now is a time to be like Isaiah and Nehemiah and Jeremiah — say bold things, take bold actions. Our senators will not change course through quiet meetings alone; they need to face public moral pressure. Let’s bring it on.

The American people need your moral voice to be led out of the wilderness of consumerism, hate speech, Fox News and talk radio media landscape. The Christian right, a political rather than a religious movement, has captured the minds of many of our people and led them astray.

In the wake of our arrests I have heard from liberals and conservatives grateful and eager for more.

3. Service must be at the core of what we do.

The Hebrew word for worship is “avodah,” which means “to serve” or “to work.”

Never do I feel closer to God than in these moments when we are marching, singing, praying, sharing testimony in the halls of power: working for God’s kingdom. We started the march with the sound of the Jewish shofar ringing in our ears. Before delivering a Bible with highlighted verses to McConnell’s office, I read from Isaiah Chapter 3, where God accuses the powerful of plundering the poor and asks, “What do you mean by grinding the faces of the poor into the dust?” If you want to know God, challenge the halls of power with God’s Word.

We must work together to spread this moral movement to every state and corner of the country, every faith and every race and age group. While handcuffed in the police van on a sweltering day, we sang hymns, shared analysis and movement-building strategies.

The Rev. Traci Blackmon sang so faithfully her handcuffs slid off just like Paul’s and Silas’ in prison. So too our moral voices united will loose the chains of greed and selfishness that bind this nation.

We had come together quickly in just five days from all parts of the country. There is nothing like being in a tight spot to challenge a movement. Let this be our growing time. Your voice is needed. Will you join us?

(Jennifer Butler is CEO of Faith in Public Life) 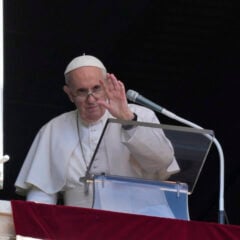 Ahead of the Trend
‘Denomination matters’ in Black-focused faith-based health programs, scholars say
Follow us on Facebook!
Submit your photos to RNS