(RNS) — An immoral whack at those of us with diseases showed up front and center following news of Sen. John McCain’s brain cancer diagnosis.

The GOP candidate that McCain squashed during last year’s primary election, an osteopathic physician, tossed a stinking turd at the senator, proving that a degree is not proof of high-quality knowledge.

So what did that failed GOP Senate candidate want to push? (The osteopath’s name is Kelli Ward. Not deserving a ton of positive publicity, I think. But there you go. )

“I hope that Senator McCain is going to look long and hard at this, that his family and advisers are going to look at this and they’re going to advise him to step away as quickly as possible,” she said.

McCain has the same brain cancer I was diagnosed with about seven months ago: glioblastoma, aka GBM. And yeah, it’s not fun. Median survival of about 15 months means half of the patients hit the Egress sooner. And there are some enormous limits attached.

But guess what? I’m OK so far. And McCain might be that, also.

Even patients who hit the median or close to it can maintain a pretty good quality of life until not long before their lives end. And no kidding: Members of Congress in my lifetime have included the anciently demented, ignorant and flat-out stupid who ran successfully for re-election time after time.

How’s McCain’s mind operating today? His precise current symptoms and any new limits are not clear yet. And if he were to choose to quit his elected office, nobody with working brains would attack that decision. But the speech he gave when he got back to the Senate only a few days after his brain surgery was pretty good. Better than some others.

I’ll admit that there is, no kidding, a moral standard that those of us who get slammed with an illness like GBM need to consider. We are all mortal, every one of us. But GBM is likely to push the focus on our unavoidable demise. And knowing the possibilities of symptoms is a good reason to consider what one’s limits should be. Particularly because it’s possible for us to cross that line quickly — and to suddenly lack the mental power to decide for ourselves what we should do.

My wife and I have had detailed discussions. Ditto, my talks with the editors and leaders of the organizations that continue to get occasional bits of journalism from me, despite my cancer-related semiretirement.

McCain should similarly be talking to his family, to his staff, to his medical experts. No question about that. He should have a designated advocate that his family will know about (and maybe a legal document identifying that). And put his preferences in writing.

But for a political hack to try to spittle him out of his work? It’s frankly astounding for a politician to push a comment below the bar of the current president. But apparently it’s possible.

I’m not saying that McCain, or the nasty GOP physician, should necessarily follow any theological standards. But there are thought-provoking angles taken by many religious leaders. Consider some from Jewish studies.

The Book of Proverbs has a few good examples that can apply to what we’re hearing now:

“Pride goes before destruction, a haughty spirit before a fall.”

But one of the most famous and most broadly applicable tales is about the sage Hillel the Elder, maybe from more than 2,000 years ago. A non-Jew showed up to his door, asking him to teach the entire Torah while the man stood on one leg.

“What is hateful to you, do not do to your neighbor,” Hillel is said to have replied. “That is the whole Torah; the rest is the explanation of this — go and study it!”

It’s pretty good advice. What’s my ambition as I follow my mortal path? What are my limits? What are the effects of those limits on my family, my readers? What would be hateful to me, do not do to my neighbor.

And what benefits could I still be generating? I’ve learned and am continuing to learn about the effects that GBM is having and may later have on me. I’m trying to make decisions that will affect my choices down that road. No question that McCain needs to be doing the same.

I’m guessing that this ain’t exactly a new issue for him.

His physical and psychological sacrifices in the military were not simple. He’s 80 years old, which is a near view of mortality for pretty much everyone to consider. And whether I agreed with his continuing moral standards or his political decisions – I have not, in many cases — I’m surely not going to use his GBM as a hammer to whack his thinking now.

Many Americans belong to faiths that have clear theological teachings about how to respect others. Whether we agree with their policies, fashions, approaches. If they demonstrate their respect to others, if they exercise civility, if they are clear in their view of transcendent morality and secular laws, then they’re earning how they should be treated. Agree with them or not.

May McCain find his best path and be an example for others! We could use the help.

(Jeffrey Weiss writes the RNS column “My Way to the Egress.”  The views expressed in this opinion piece do not necessarily reflect those of Religion News Service) 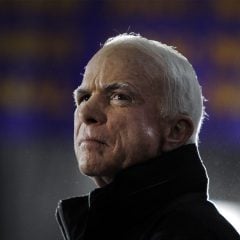 Opinion
Why is it wrong for Trump to speak ill of John McCain?
Follow us on Facebook!
Submit your photos to RNS