(RNS) — Of all the feasts celebrated in the church — Easter aside — the Feast of the Transfiguration, celebrated Aug. 6, is one of the most mysterious.

As a child, I thought that Jesus was simply showing off his power to his apostles. No doubt, many still preach that the transfiguration, which commemorates Jesus’ change in appearance on the mountaintop, is about Christ demonstrating power.

But John Henry Newman — following a lengthy tradition beginning in the earliest of Christian writings — challenges this idea as he speaks of the paradoxical and mysterious nature of the transfiguration as the key to our transformation.

Newman began his ministry as an Anglican priest in 1825 and was a founder of the influential Oxford Movement. He found himself drawn to Roman Catholicism and in 1847 was ordained a priest.

Newman locates Christ’s transfiguration within a pattern of divine revelation. God’s revelation to humans, or divine revelation, is never only for knowledge, as in school or book knowledge. Its purpose isn’t for us to only know about God.

Rather, it’s for us to know God, which is inherently transformational. Newman writes that when Christ was transfigured, or showed his divine nature to the apostles, he did so to show them that they too might be transformed with him:

“It is … the duty and the privilege of all disciples of our glorified Savior, to be exalted and transfigured with Him; to live in heaven in their thoughts, motives, aims, desires, likings, prayers, praises, intercessions, even while they are in the flesh; to look like other men, to be busy like other men, to be passed over in the crowd of men, or even to be scorned or oppressed, as other men may be, but the while to have a secret channel of communication with the Most High, a gift the world knows not of; to have their life hid with Christ in God.”

What does it mean to follow Christ’s pattern of transfiguration to our own transformation?

The location of Christ’s transfiguration is significant. He ascends the mountain, and at the top shows his glorified nature. Newman sees this as the apex of Christian faith and prayer, where all is “still and calm as heaven.”

But Christ and his apostles couldn’t stay at the summit of the mountain forever. They eventually had to descend the mountain and face a world that runs counter to the serenity of heaven.

For some Christians, both past and present, this descent from the summit of the mountain has meant intense suffering and even martyrdom. Many in today’s world are forced to follow in Christ’s death as martyrs like many Christians in Syria and in other parts of the Middle East.

The world is still witnessing the ever-present descent from the mountain as bombs decimate Coptic churches in Egypt, and Chinese worshippers watch the destruction and desecration of Christian churches.

Even in the midst of an often-unforgiving world, Christ’s transfiguration provides the hope of transformation. All who ascend are transformed. Those whose descent leads to dramatic suffering can rest assured that Christ suffers along with them and provides hope of the resurrection.

Those transformed in Christ emit a special kind of light in a world, which, as we all know, is often filled with darkness. The saints are transformed the most completely. They can guide the rest of us as we ascend and descend this often-precarious mountain throughout our human lives, whether we endure intense suffering as in the case of many Christians in Syria, Egypt, and China, or face the kind of suffering that all deal with, such as the loss of a family member.

The saints, led by the light of Christ, can help lead us through the often-unpleasant descent to the mysterious and glorious ascent of resurrection.

As we celebrate the Feast of the Transfiguration may we remember the suffering that some endure on their journey to transformation.

(Elizabeth H. Farnsworth is the managing editor of the Newman Studies Journal and is a doctoral candidate in theology at the University of Dayton. The views expressed in this opinion piece do not necessarily reflect those of Religion News Service) Opinion
Newman, the newest Catholic saint, is a model of making reason our path to God 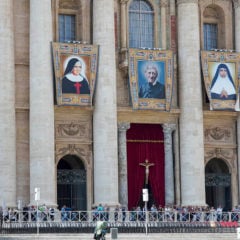