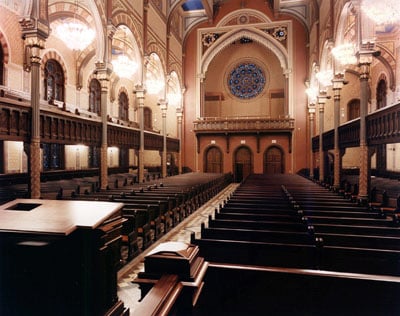 Let me check my calendar.

Last week was Tisha B’Av. That means that there are now seven weeks until Rosh Ha Shanah. For Jews, that means that we are starting to think about the High Holy Days, and religious school, and synagogues – and membership dues.

As if hearing the shofar blast that will soon be sounded in sanctuaries around the world, many Jews have woken up to (what should no longer be) the news: Jewish communal life is expensive. Synagogues, day schools, summer camps, JCCs, plus the expected contributions that will keep them all afloat – it adds up to a pile of shekels.

That was certainly Leslee Komaiko’s experience. She embarked on a quest to hire a bar mitzvah tutor for her son, and discovered that it was not going to be, well, a metzia (bargain). And then, there are High Holy Day tickets – also a rather hefty amount.

And why not simply join a synagogue? Again – too expensive, even though she admits that the synagogue that she used to attend gives financial consideration to those who cannot afford it (a common practice).

Rob Eshman, editor of the Jewish Journal of Los Angeles, responded by saying that: “If you want to participate meaningfully in Jewish communal life, there now are many low-cost, and in some cases no-cost, ways to do so.” He listed Birthright, free online Jewish newspapers, synagogues with different kinds of financial models, scholarships for summer camps, etc.

Things we value — cars, sports camps — cost money. At some point, Jewish involvement does require a choice — you’ll need to pay something, which means foregoing something else. But in exchange, you get a sense of meaning, community, comfort, tradition, belonging, intellectual stimulation and good jokes.

I am simply a congregational rabbi. I do not have an MBA. But, even without an MBA, this is my take on the “synagogues are expensive” rant.

American Jewish life is undergoing significant challenges. Rarely before have we needed, as much as now, to make Judaism relevant, powerful, engaging, enticing, and gutsy.

That costs money. We deserve, we demand, the best – rabbis, educators, cantors, executive directors, teachers. We can no longer (if we ever could, though we did) settle for mediocrity. The need is simply that pressing.

And it’s not only the professionals. It’s the administrative assistants, the custodians, all the other people who make Jewish communal life work. Because a people that demands quality in its everyday life merits quality in its Jewish life. The mailings have to get done on time. They have to look attractive. The websites have to be scintillating. The bathrooms have to be clean.

We are doing this for a new generation – many of them, like the child in the Haggadah who “does not know what to ask.” So we are giving them answers – often to questions that they do not even know that they have.

An earlier generation gave. That generation is fading. And, let’s be honest – synagogues were never the favorite tzedakot of even our wealthiest givers. Federations, hospitals, museums (Jewish and non-Jewish): all were “sexier” causes than synagogues. Which meant that synagogues were always underfunded, and will continue to be.

A quality Jewish life means a quantity of Jewish dollars.

Yup. It was recently reported that Israel’s Diaspora Affairs Ministry under Minister Naftali Bennett is about to spend 250 million shekels to “improve the Jewish identity and connection to Israel” of college students in America.

And who is slated to get the money?

Well, yes, Hillel. No issue there.

But, also – Chabad and other Orthodox outreach groups.

Yeah, I get it: “from out of Zion goes forth Torah.”

Mr. Bennett: if you are going to be sending the hard earned money of overly taxed Israelis to the United States for Jewish education, here is an idea.

Send it to the places where it is most needed.

Send it to Reform and Conservative synagogues to use in their supplemental schools.

Do you realize how underpaid Jewish educators are? Do you realize that there is a shortage of good Jewish teachers in the United States?

Do you realize how this is precisely the kind of problem that you can throw money at?

I recall the bumper sticker: If you think that education is expensive, try ignorance.

Yes, synagogue life is expensive. All good things in life are.

But, ultimately, the fading of American Jewish institutions is going to be much more costly – to American Judaism itself.