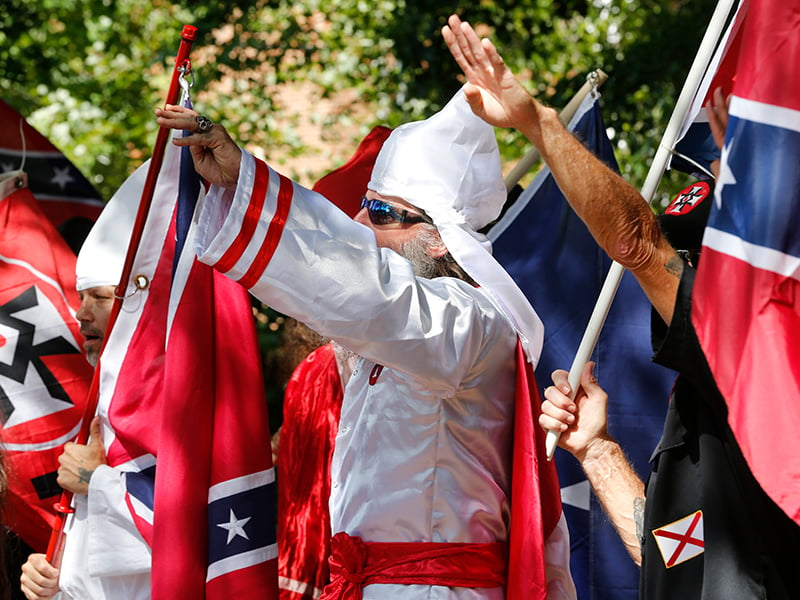 (RNS) — The deadly violence in Charlottesville, Va., and the images of white nationalists, the Ku Klux Klan and neo-Nazis carrying Confederate and swastika flags shouting, “Jews will not replace us!” and “You will not replace us!’ has stunned millions of people throughout the world.

But I was not surprised. As a Jewish youngster growing up just a couple hours' drive away in Alexandria, these sentiments were plain to see.

I first encountered them in the early 1950s at an outdoor revival meeting in a huge tent erected about 10 miles south of Alexandria on U.S. Route 1. While it was my first revival meeting, it was old stuff to my three high school friends — all evangelical Christians — who had invited me to join them on a hot Saturday night in May.

The all-white congregation of about 500 people (I was told the “colored” conducted separate revivals with their own preachers) sat on hard metal folding chairs. The huge number of lightbulbs strung across the top of the tent created a fire hazard and raised an already high temperature. The lighting and the natural heat produced hundreds of sweating people.

The meeting itself consisted of an emotional mix of well-known Christian hymns and a fiery sermon describing the many sins humans regularly commit. The highlight came when the white-haired preacher issued the call for people to come forward, kneel in front of the makeshift altar, and “accept Jesus into their hearts.”

Strangely, the sermon didn’t resonate too well that night. I was later told that most of the audience, many of them habitués of outdoor religious meetings, had come forward at previous revivals. My three classmates remained in their seats and did not respond to the preacher’s call.

However, the atmosphere inside the tent rapidly changed when the preacher began speaking about the “the plagues sweeping our beloved America.”

I mistakenly thought he would tick off the litany of the 10 woes that descended upon ancient Egypt listed in the biblical book of Exodus. Perhaps the speaker would release some frogs (one of the plagues) to illustrate his sermon.

But instead of the biblical catastrophes that are a part of the Passover seder narration, the animated preacher cited the modern ills ostensibly polluting America.

They included the organized labor movement, the subversive Communists working in Washington (it was the McCarthy era, after all), the Federal Reserve system, sexual promiscuity, the excess numbers of foreigners in America, the demeaning of the Confederacy, and one “plague” that really surprised me: the federal government’s trampling of “states’ rights.” It was a concept taught in some of my high school history classes as the basic reason — not slavery — for the Civil War.

Finishing up, the preacher shouted: “Let’s take back America! They have stolen America. It’s our country, our America!”

Unlike the congregation’s tepid response to the preacher’s earlier call to accept Jesus, this time the crowd arose from their chairs, began cheering, and then spontaneously started singing an emotional rendition of “Dixie,” the song most linked to the Confederacy.

I was only 16 years old that night, but the “tent people’s” sense of fury has remained with me.

The preacher’s heated cry that America had been stolen was no run-of-the-mill conversion sermon, nor was it the recitation of the traditional biblical plagues I had anticipated. Instead, it was a white Christian nationalist outburst that stunned me with its anger and rage and its not so subtle call for the violent “restoration” of a “Christian America.”

The crowd that night believed something precious had been “stolen” from them as Christians. And it had to be “reclaimed.”

That long-ago bitter sermon provides a warning as Americans ponder this question: Was the lethal violence in Charlottesville a one-time event or does it represent the future of an America religiously and politically at war with itself?