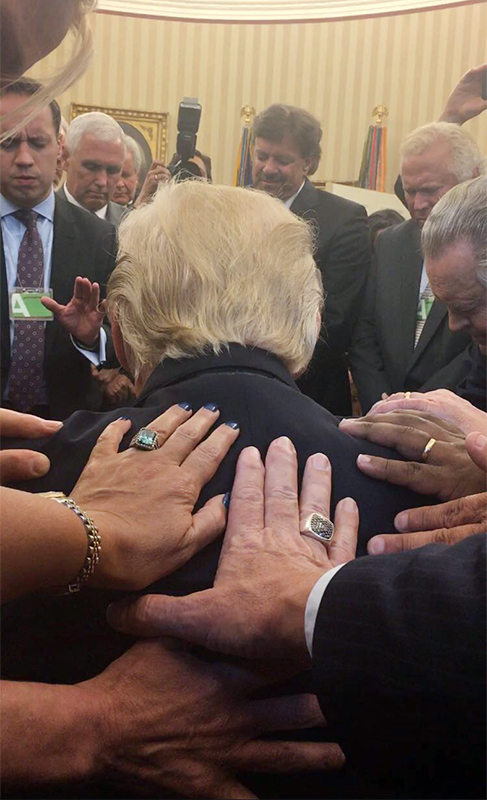 Evangelical supporters place hands on and pray with President Trump in the Oval Office of the White House. Photo courtesy of Johnnie Moore
August 23, 2017
Mark Silk

In the wake of Charlottesville, Donald Trump's job approval rating has sunk to a new low (39 percent to 56 percent), thanks almost entirely to a decline among Republicans, from 81 percent approval to 73 percent. But according to the cross-tabs in the latest Politico/Daily Caller survey, it's clear that the leaching away of GOP support has not come from the Trump's evangelical base.

As noted in this space two weeks ago, evangelical approval of Trump did fall significantly between March and early August, from a margin of 31 points (63 percent to 32 percent) to one of 14 points (56 percent to 42 percent). After Charlottesville, that margin has remained almost the same -- 13 points (54 percent to 41).

It's the non Christians -- Nones, for the most part -- who have responded most to Charlottesville. Before, they disapproved of Trump 62 percent to 31 percent; now the numbers are 66 percent and 28 percent -- a seven point shift..

But interestingly, Trump's Jewish approval ratings have remained constant. Back in March, 66 percent of Jews disapproved of his job performance and 28 percent approved. After Charlottesville, the numbers are 69 percent and 29 percent.

In other words, it seems that the President's equivocation between neo-Nazis and their opponents hasn't upset his Jewish supporters at all.