The leadership of the landmark church in the nation’s capital had planned to spend a lengthy period discussing race-related issues before deciding what to do with the windows. That plan was made after the fatal shooting of nine members of a Bible study group at a black church in Charleston, S.C., in 2015.

But a statement released Wednesday (Sept. 6) said that “after considerable prayer and discussion,” the cathedral’s board, or chapter, voted a day earlier “to immediately remove the windows.”

“The Chapter believes that these windows are not only inconsistent with our current mission to serve as a house of prayer for all people, but also a barrier to our important work on racial justice and racial reconciliation,” reads a letter from Washington Episcopal Bishop Mariann Edgar Budde, Washington National Cathedral Dean Randy Hollerith and Cathedral Chapter Chair John Donoghue.

In August 2016, the cathedral quietly removed the panels depicting the Confederate flag and replaced them with red and blue panes to match surrounding glass. But the overall glass and stone bays honoring two generals, Robert Lee and Thomas “Stonewall” Jackson, remained. 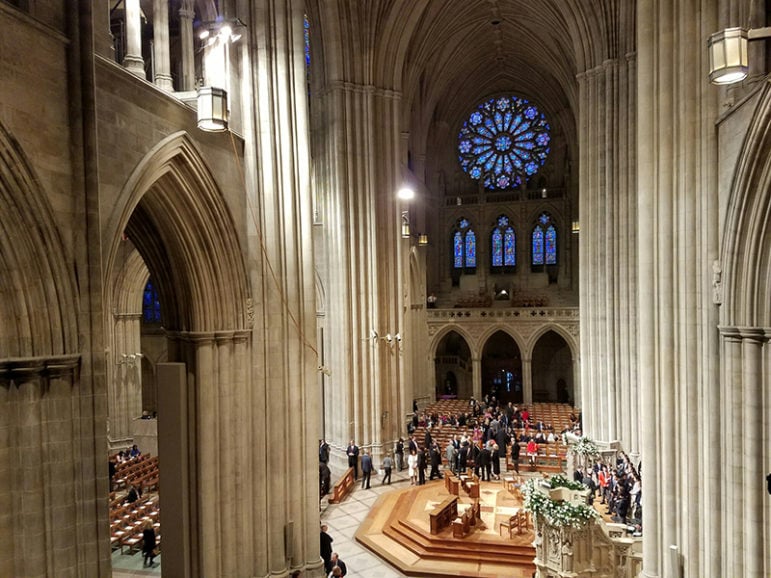 People gather inside the Washington National Cathedral before the start of the National Prayer Service on Jan. 21, 2017. RNS photo by Adelle M. Banks

“These windows will be deconsecrated, removed, conserved and stored until we can determine a more appropriate future for them,” the leaders wrote. “The window openings and stone work in the Lee-Jackson Bay will be covered over until we determine what will go in their place.”

The side-by-side windows honoring the Confederate generals were added in 1953 with the support of the United Daughters of the Confederacy, a group that sought to honor the memory of veterans who fought for the South.

Under the Robert E. Lee window there is language etched in stone that calls him “a Christian soldier without fear and without reproach.” And under Jackson, it says he “walked humbly before his Creator whose word was his guide.” 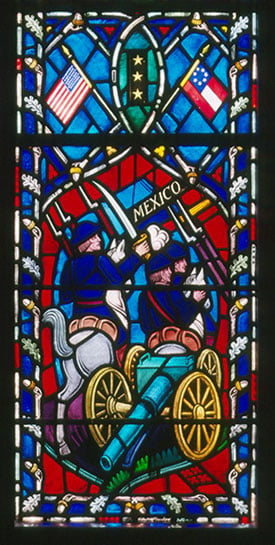 The church officials said they hope the windows may serve to be a teaching tool elsewhere but were no longer appropriate for the cathedral’s sanctuary.

“We want to be clear that we are not attempting to remove history, but rather are removing two windows from the sacred fabric of the Cathedral that do not reflect our values,” they said.

As recently as late June, the cathedral’s dean had said there was still another year to go before a decision about the windows would be made.

But the officials said their decision-making process concerning the windows sped up after the violence in Charlottesville, Va., last month, when neo-Nazis clashed with counterprotesters. But they also acknowledged that the windows’ removal is not sufficient for addressing racial injustice.

The cathedral held a series of public programs focused on the Confederacy and the two generals and about racial justice.

“We recognize that there are people of goodwill who disagree with our decision, and also others who have been hurt or confused by the amount of time it took us to reach it,” the leaders concluded. “We trust, however, that what unites us in Christ is greater than our differences.”

Other prominent houses of worship have also considered what to do with their Confederate memorials since the mid-August events in Charlottesville. Duke University removed a statue of Lee from its chapel entrance. Members of R.E. Lee Memorial Episcopal Church in Lexington, Va., mulled whether to change its name but decided against such a move at an Aug. 21 meeting.