(RNS) — Among sociologists of religion, few names are as revered — and controversial — as Rodney Stark. He has authored 150 scholarly articles and 32 books in 17 different languages, and never shies away from controversy. In 2010, for example, Stark wrote a book defending the Crusades as a “justifiable response to a strong and determined foe.”

Most recently, the Baylor University professor penned “Why God: Explaining Religious Phenomena.” He explains why faith is a universal feature of human societies, and he argues against emerging theories that any system of belief about the meaning of life can be considered “religion.” That term must necessarily include a belief in a God or gods, Stark says.

Because of his immense influence, I decided to chat with this venerable thinker. While he didn’t technically ask me to get off his lawn, his answers possess the subtlety of a sledgehammer. Here, I ask Stark about the definition of religion, the nature of atheism and the benefit of heresy. His answers are illuminating, hilarious and exactly as blunt as you’d expect them to be.

What’s your definition of religion and how is it unique?

My definition isn’t unique — it is the definition every sensible person applies to religion. It differs only from the very odd and biased definitions applied by the dominant, anti-religious social scientists who exclude any mention of god or the gods from their definitions. That is, I define religion as systems of thought offering a general explanation of being or existence, predicated on the assumption that there is a God (or gods). 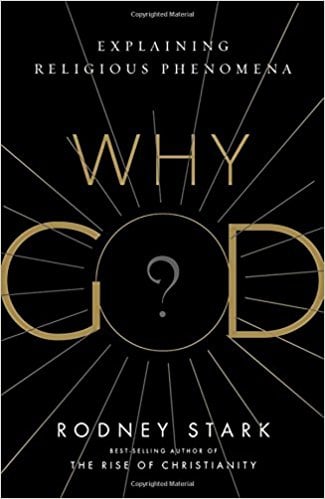 You insist that God is required for a system of thought to be a religion. What do you say to people who claim that atheism is its own form of religion? Or people who talk about “the religion of science”?

To say these are forms of religion may be apt as recognitions of the “true believer” outlook that some people invest in atheism or science, but it blurs vital differences among them. The village atheist is not merely in a different “denomination” than is the village priest.

Why is religion a universal feature of human societies?

Because people, even in very early societies, always wonder how did this all come to be?

You say that none of the three great “monotheistic religions” — Judaism, Christianity and Islam — are purely monotheistic. Can you explain what you mean?

Many nonreligious people say that religion is, overall, a social ill. What say you?

That they are wrong.

Does religion serve to sustain the moral order?

Yes. There is a huge body of research showing that religious people are less likely to commit crime and that the more religious a community, the lower its crime rate.

Contrary to popular belief, you show that it’s people of privilege, rather than suffering masses, that launch new religious movements. Talk about that.

Throughout history, most, and probably all, new religions have been initiated by people of privilege because they have the leisure to focus on existential concerns and often find the conventional answers to these matters insufficient. They thereby suffer from “spiritual deprivation.” Somehow, social scientists remain convinced that religion is the “opium of the people,” and ignore the obvious — such as that Methodism was not founded in the slums of London, but by young men at Oxford.

Why do most new religious movements fail?

Because they grow so slowly that the founders lose heart.

Religion is often seen as a force to promote one system of thought over all others. But you think religion can actually promote pluralism. How so?

Of course, most religious groups would set themselves up as a monopoly if they could. But this is impossible unless the power of the state can be enlisted to force all competing faiths to submit. Why? Because there always is a considerable variation in the religious preferences of members of a population. Hence, the “natural” (if not the usual) religious situation is pluralism.

You say that an insufficient image of God contributes to the failure of religious institutions, using mainline Protestantism as an example. But I’ve heard many sociologists say that mainline’s decline has been similar to evangelicalism when you account for differing birthrates. How do you respond?

Nonsense! Solid data show that the rapid decline of the liberal mainline in America was not a matter of differential birthrates. People left those denominations and joined more conservative bodies. Eventually, the liberal denominations have had low fertility rates because younger people had left!

“Heresy” has become a dirty word for many conservatives today. Why do you say that “the truly interesting and important revelations are heretical, or at least very innovative”?

From the point of view of history, revelations that merely confirm the existing faith are not very significant because nothing much happens as a result. It is when someone gets revelations that are different, and thereby “heretical,” that there can be social consequences such as the founding of a new religion.

What are the religious movements in America today that are the greatest forces for social good, in your opinion?

That is a slippery slope onto which I shall not venture.

Which religious movements in America are the most socially destructive, in your opinion?