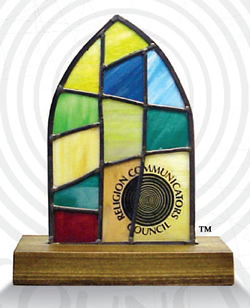 The Religion Communicators Council (RCC) is accepting entries for the 2018 Wilbur Awards. Secular media professionals have until Feb. 5, 2018 to submit work produced in 2017 for consideration in one of the oldest recognition programs in religion communication.

The 2018 awards will be presented Saturday, April 7 in Atlanta, Ga , during the council’s national convention. Winners receive a handcrafted stained-glass trophy and national recognition for their work.

The award is named for the late Marvin C. Wilbur, a pioneer in religious public relations and longtime council leader. For more information on the Wilbur competition or entry details, go to the Wilbur Awards page on the RCC website.

The Religion Communicators Council is an interfaith association of more than 400 religion communicators working in print and electronic communication, advertising, and public relations. Members represent Bahá’í, Christian, Hindu, Jewish, and Muslim faith communities. Founded in 1929, the council is the oldest public relations professional association in the United States.