Yesterday, Melania Trump’s impassioned defense of her controversial White House Christmas decorations showed up in my Twitter feed, with her tweet alternately liked, mocked, and retweeted by several people I follow: 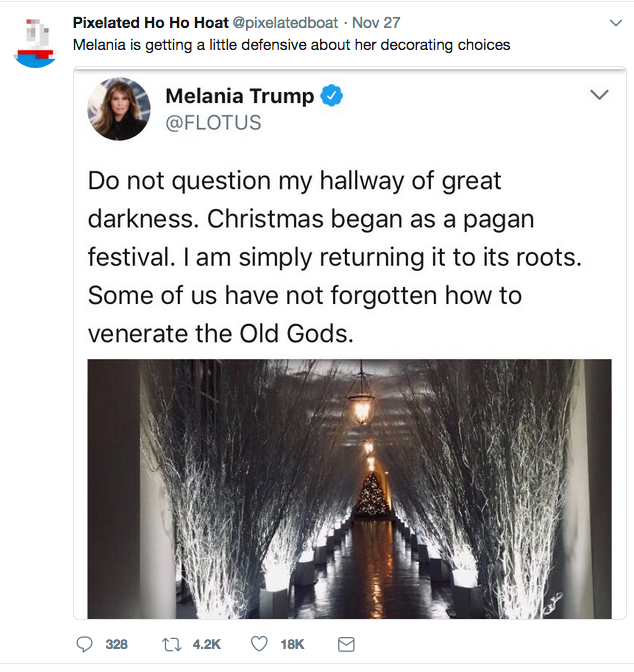 The retweeters’ general consensus seemed to fall along two lines. First, the photo reflected well the sense that many have that winter is coming to Trump’s America, and that the night is dark and full of terrors.

Second, some pointed to the blatant hypocrisy that the Trumps, who have promised to restore the word “Christmas” to a White House they (falsely) claim avoided it for the last eight years, would take a pagan turn, with Melania defending the “old gods” supplanted by Christianity rather than the birth of the Savior.

How would this crass heathenism go down with the evangelicals who put Trump in office, people wondered?

And was Melania finally, after months of simpering silence compared to the activism of other First Ladies, showing some backbone? Getting a platform? Speaking her actual mind?

Instead, the tweets and video about the White House Christmas decorations show her playing the role she has performed in the past – smiling fashion model. The fact that she is wearing a winter coat while walking through her own house should in no way be interpreted as a political statement of solidarity with the masses of graduate students who are about to lose their shirts under the new tax plan.

Why were thousands of liberals so willing to believe this outlandish fake tweet? And why were so many conservatives jumping in to defend Melania’s paganism? (Yes, some did. Read the comments.)

And most of all, why did so few people realize it was a joke? The author calls himself the “prince of lies” in his Twitter self-description, and his feed is filled with funny parodies of pop culture. So it’s not like this was a case of someone trying hard to pass off a whopper as a truth.

The depressing reality is that despite the ease of verifying the tweet, liberals jumped on it because they’re living in a time when the President of the United States abuses Twitter every day to shock and defame and mischaracterize. The stage is set; of course we would swallow whole any theatrical display that ensues.

The truly disturbing part is that yesterday also saw the real danger of “fake news” played out on Trump’s Twitter feed, as he retweeted three anti-Muslim videos created by an alt-right British woman who has been convicted of religiously aggravated harassment in the UK.

Trump’s action led to a Twitter war with UK Prime Minister Theresa May, with the British government strongly objecting to Trump’s inflammatory retweet and Trump proving himself once again incapable of discerning friend from foe, lashing out that May should attend to problems at home. Like the US doesn’t have any problems that he could attend to instead of raging on Twitter.

Yet there’s more. In this presidency when we keep thinking we have hit a moral rock bottom but each day brings unexpected new lows, a quiet nadir occurred when White House press secretary Sarah Huckabee Sanders defended the president’s action by conceding that the videos may not have been true, per se, but the threat of Muslim terrorism is real and therefore the end justifies the means. So the videos had that edge of, you know, truthiness.

As one commenter on Twitter pointed out, her willingness to set aside the question of whether the videos were truthful if they support the narrative the president wants us to imbibe is in fact the very definition of “fake news.” 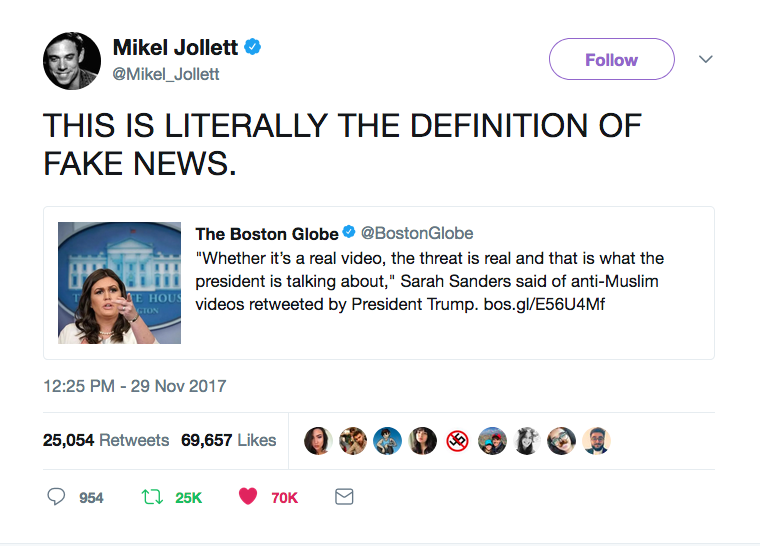 But it’s another day in Trump’s America, and all that was yesterday’s dustup. Who knows what today might bring? As the White House decorations remind us, winter is coming, and the night is dark and full of terrors.