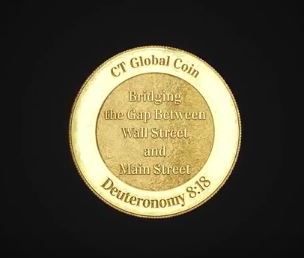 Christian Traders has launched CT Global Coin as a "Cryptocurrency for the Global Christian Community". The company has been pioneers in bridging the gap between Wall Street and Main Street since 2001. A company spokesperson revealed they are providing their own version of Bitcoin built on the Ethereum Blockchain known as the CT Global Coin. This Cryptocurrency was designed and created for a faith and community based demographic over 2 billion strong worldwide.

Stage 1 of the Pre-Sale open only to CFRN Partners offered a buy 2 get 1 free bonus. Stage 1 ended Sunday night December 17, 2017 at midnight. Stage 2 opened Monday December 18, 2017 to the CFRN Community at large with a buy 3 get 1 free bonus structure.

Based on the strength of the Pre-Sale thus far, Christian Traders issued a statement that inventory may be depleted by the end of Stage 3. The final offering Stage 3, slated to begin December 25th, 2017, opens the Pre-Sale to the entire Global Christian Community. If estimates are correct, there will be no ICO as all Tokens will be sold during the Pre-Sale.

Unlike many Cryptocurrencies, Christian Traders chose to not become a Carl Sagan Crypto with billions and billions of Tokens in circulation. Only 1 million were created and there will never be more than 1 million. The CT Global Coin is not a security.

As a Pre-Mined - Proof of Stake - Store of Value - Token, Christian Traders is bringing something new and exciting to the world of Crypto and it's Token will strengthen a bond between those with similar values and beliefs around the world. This is commerce at its most basic level.