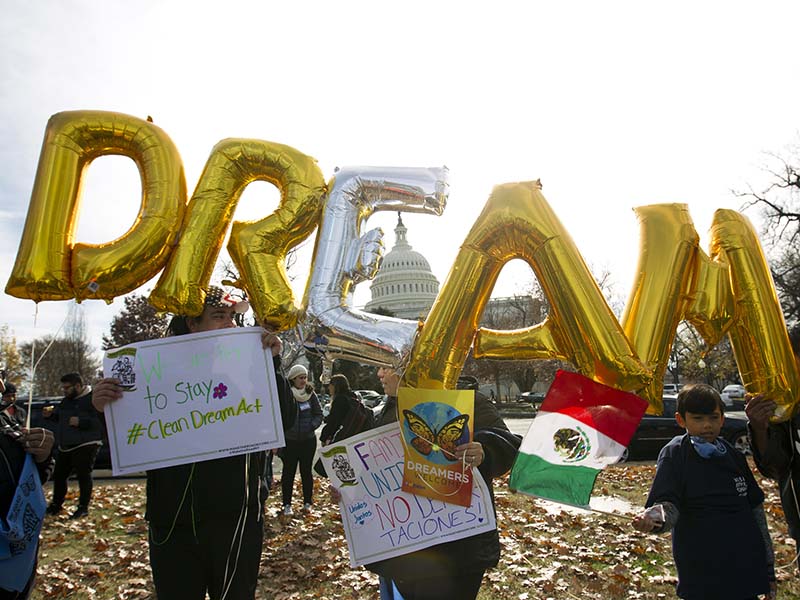 Yuriana Aguilar, a DACA recipient and post-doctoral fellow at Rush University Medical Center in Chicago, celebrates Christmas with her family in this undated photo. Photo courtesy of Yuriana Aguilar

CHICAGO (RNS) — When Yuriana Aguilar gathers for the holidays with her family in California, the celebration revolves around food.

On Christmas Eve, they’ll open presents and maybe watch a Christmas special on TV. But mostly it's about tamales and pork ribs in red sauce and homemade tortillas — lots of tortillas.

For New Year’s, her family will cook a whole pig, with everybody gathered around a pot as it cooks outside because the meat tastes delicious when it comes out hot.

It’s “just that regular, typical tradition, and just the most important thing: being with family,” Aguilar said.

That’s what makes this year’s Christmas celebration so bittersweet, full of uncertainty about what the holiday could look like next year.

While the 28-year-old is looking forward to seeing her family, she also is thinking about the looming end to the Deferred Action for Childhood Arrivals program, which she registered for in 2012. She came to the country from Mexico at age 5 with her parents.

“It’s a big shadow during the holidays,” she said.

Yuriana Aguilar is pictured Dec. 11, 2017, at Rush University Medical Center in Chicago, where she is a scientist. RNS photo by Emily McFarlan Miller

“I would wish that they would pass something good now, and it would be like our Christmas gift. That would be one of the best Christmas gifts — to have legislation that is more permanent, similar to DACA. But we have no idea what’s going to happen."

Christian organizations and believers on both sides of the political aisle have pushed for lawmakers to take action to protect young, undocumented immigrants. But Congress adjourned Friday (Dec. 22) without passing any such legislation, leaving so-called "Dreamers" like Aguilar, a post-doctoral fellow at Rush University Medical Center in Chicago, to celebrate the holiday with anxiety about what next year will bring.

“In Dreamers, I see the face of Christ. In turning their backs on young immigrants, Congress joins with the innkeepers who turned the Holy Family away," said the Rev. Jennifer Butler, CEO of Faith in Public Life and former chair of the White House Council on Faith-based and Neighborhood Partnerships.

"I pray that immigrant families are filled with hope this holiday season. We will not be turned away until we achieve justice for all, starting with a clean Dream Act."

About 800,000 people now are protected from deportation and allowed to work by DACA.

That leaves many families worrying this could be their last Christmas together in the only country Dreamers have ever really known as they gather to celebrate the holiday.

President Trump decided in September to end DACA, an Obama-era program granting work permits to undocumented immigrants who were brought to the United States as children.

Trump’s decision will take effect in March, a delay that was meant to give Congress six months to come up with a permanent legislative solution. But it could take up to seven months to implement any legislation, the National Immigration Forum has estimated.

After March 5, about 1,000 people a day will lose the protections DACA gave them for staying and working in the country, according to the forum.

The Christian Community Development Association organized the Camino de Sueños, or "Path of Dreams," a two-month virtual pilgrimage that ended with a Dreamer Prayer Rally and several arrests on Dec. 4 at the U.S. Capitol.

The Southern Baptist Convention’s Ethics & Religious Liberty Commission released a “statement of principles on Dreamers” in October, and a number of conservative Christians such as Robbie George, Richard Land and Samuel Rodriguez signed onto a letter in November. Both documents asked lawmakers to give Dreamers a way to stay in the country.

The name “Dreamer” comes from the DREAM Act, a bill with that goal that has been introduced but never passed into law.

“We must protect them and their families because family is a top priority for the Christian,” said Walter Strickland, first vice president of the Southern Baptist Convention.

Most DACA recipients — like most immigrants overall — are Christians, according to Voices of Christian Dreamers, which aims to change the conversation about undocumented immigrants in the church and beyond.

“The more I reflect on Jesus' birth and life, the more I feel this profound sense of understanding and love from God, understanding where we are and our predicament as immigrants and refugees in this country,” said Liz Dong, an advisory board member at Voices of Christian Dreamers.

Dong, 28, is a DACA recipient who came to the U.S. from China when she was 10. She lives in the Chicago suburbs, where she works in immigration advocacy on staff at World Relief.

“It warms my heart to think of Jesus, who could have chosen to identify with any group of people while on earth chose to be a refugee as a child,” she said. “The more I work in this space and live out my own immigrant journey and also see the church live out that call, it also brings me a lot of encouragement and hope.”

One DACA recipient who now has a family of her own is Xochitlh Arvizu, 27, who calls her son, Maximiliano Garcia, “our little miracle.”

After Arvizu qualified for DACA in 2012, a mentor invited her to apply for a position with Lighthouse Community Center in Santa Ana, Calif., a ministry of Mariners Church. She had come to the U.S. from Mexico when she was 7.

With the health insurance from her new job, she visited a doctor and quickly ended up in surgery for a tumor on one of her ovaries. Doctors weren’t sure she would be able to have children, she said, and “that’s where faith kicked in.”

But with DACA ending, it made it hard for Arvizu and her husband, Mario Garcia, also a DACA recipient, to plan their son’s birthday party: Should they do something big, or just have a little cake to save money in case their jobs disappear with their protected status?

Their tradition is getting together as a family — about 32 people when everybody is there — all bringing potluck dishes and singing karaoke. This year, she said, her immediate family is “limiting ourselves for Christmas.” Each likely will get one gift, but she probably won’t be buying for nieces and nephews.

And they’re thinking about the unthinkable: What if DACA runs out and she and her husband both are deported? What would happen to their son, a U.S. citizen?

“We have faith, and we know God’s still sovereign and he’s going to care for us as a family, but then the struggle is he also tells us we have to prepare,” she said.

All she wants, she said, is for DACA recipients to have the opportunity to become citizens, to "continue the work of God — what God has called us to do and our purpose in our lives here in the States.”