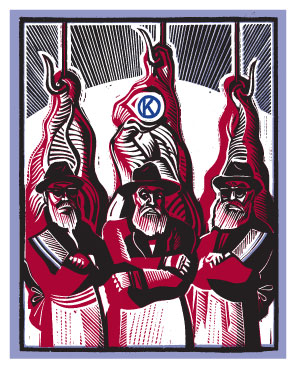 There is some irony in Donald Trump’s decision to commute the sentence of Sholom Rubashkin, the Chabad-Lubavitch hasid, on Wednesday.

Rubashkin’s case came about in May of 2008, after immigration officials conducted a massive raid on his family’s kosher slaughtering plant in Postville, Iowa, and arrested 400 undocumented foreign workers. Agriprocessors, which Rubashkin ran, was at the time the largest purveyor of kosher meat in the country.

Why would a president elected on a platform of keeping out illegal immigrants — whose first intervention in the federal sentencing system was to pardon the notoriously anti-immigrant Arizona sheriff Joe Arpaio — help out a felon who employed them?

No doubt, his daughter Ivanka’s connections with Chabad didn’t hurt, nor did the tendency of the ultra-Orthodox to vote for and contribute to Republicans.

But Donald Trump also knows that sometimes an employer’s gotta do what an employer’s gotta do. In 1980, he himself employed 200 undocumented Polish laborers to demolish the old Bonwit Teller building on Fifth Avenue — working them 12 hours a day and more, paying them less than half union scale if at all, and providing them with no hard hats, gloves, or masks to clear the way for the future Trump Tower.

Twenty years ago he paid $1.4 million to settle the class action lawsuit that arose from the demolition, according to documents released under court order just last month.

In their case against Rubashkin, federal prosecutors let the immigration charges go in favor of financial fraud, contending that he had bilked creditors out of $26 million. Convicted on 80 counts in 2009, the 57-year-old got 27 years in prison, a sentence deemed too harsh by members of his religious community, a bunch of elected officials, and five former U.S. attorneys general.

Be that as it may, it’s worth reviewing the checkered history of Agriprocessors, which Rubashkin’s father Aaron established in an abandoned slaughterhouse close to Iowa’s cattle and far from its union organizers in 1987.

Item: In August of 1995, Aaron Rubashkin and his son Moshe were found guilty by the National Labor Relations Board of collecting union dues from workers at Cherry Hills Textile, Inc., a Brooklyn company they owned, and failing to remit the funds to the United Production Workers Union.

Item: In 2004, Agriprocessors signed a consent decree and agreed to pay a $600,000 fine for violations of the Clean Water Act.

Item: Also in 2004, People for the Ethical Treatment of Animals (PETA)  issued a secretly taped video of the slaughtering of cattle at the plant that arguably violated the laws of ritual slaughter and which were called by an academic expert in animal slaughtering techniques, “the most disgusting thing I’d ever seen.”

Item: In 2005, the Rubashkin family opened a slaughterhouse on the Oglala Sioux tribal reservation in Gordon, Nebraska that has been the subject of numerous food safety violations.

Item: In 2006, the Iowa Labor Commission reported on multiple and “egregious violations” of child labor laws at the plant.  (Ultimately a state court failed to convict Agriprocessors of violating those laws.)

Item: After the 2008 raid, a floor supervisor from the Agriprocessors plant pleaded guilty to aiding and abetting the harboring of undocumented immigrants.

And that’s to say nothing of the bitter complaints of Postville’s residents that the ultra-Orthodox Jews who had descended on their town were dishonest and unscrupulous in their business dealings. (This account of Jewish-Gentile relations is confirmed in Postville: A Clash of Cultures in Heartland America [2000] by Stephen G. Bloom, a Jewish journalist teaching at the University of Iowa.)

In an article about Agriprocessors written not long after the immigration raid, my Trinity colleague, Jewish Studies professor Ronald Kiener,  wrote:

This is a tale of Hasidic Jews who are utterly at odds with what most Americans understand as modernity. They learn from their most sacred text, the Tanya (published in 1797 by the founder of Chabad Hasidism, Rabbi Shneur Zalman of Liadi) that “the souls of the nations of the world, the idol worshippers, derive from unclean husks and have no goodness in them whatsoever.”

This xenophobic teaching, an intolerant note hiding within the otherwise fetching melody of Chabad Hasidism, is spun differently for different audiences. But it indicates what can happen when business proprietors armed with a chauvinistic mystical theology that denies the humanity of non-Jews face off against the “laws of the land.”

After being released from federal prison, Sholom Rubashkin was greeted by thousands of Chabad followers in Brooklyn, and he thanked the president profusely for what he had done. Trump may be innocent of mystical theology, but when it comes to the laws of the land, he and the Rubashkins are birds of a feather.