Known as an administrator who never lost his personal touch and commitment to the poor and needy during half a century in leadership roles, Monson led the roughly 16 million-member church, popularly known as the Mormons, since February 2008.

An LDS church announcement said Monson, who had been in declining health for several years, died “from causes incident to age.” Funeral arrangements are pending.

Monson was a “true prophet” who will be remembered for his lifetime of “lifting the downtrodden, comforting the wounded, healing the sick, brightening the lives of the lonely at heart,” former Massachusetts Gov. Mitt Romney posted on Facebook Wednesday.

Utah Sen. Orrin Hatch lauded Monson’s life of service and his hallmark of humility. “Countless were the lives he touched as a prophet, father, and friend. Today, I join millions across the globe in mourning his passing,” Hatch tweeted.

President Monson was among the greatest men I have ever known. Service was his motto and humility his hallmark. Countless were the lives he touched as a prophet, father, and friend. Today, I join millions across the globe in mourning his passing. #LDSChurch #utpol

Although his successor will not be named until after Monson’s funeral, Russell M. Nelson, 93, a cardiothoracic surgeon who was the longest-serving member of the church’s leadership council, the Quorum of the Twelve Apostles, is expected to become the next LDS “prophet, seer and revelator,” a role established by Mormon founder Joseph Smith Jr. 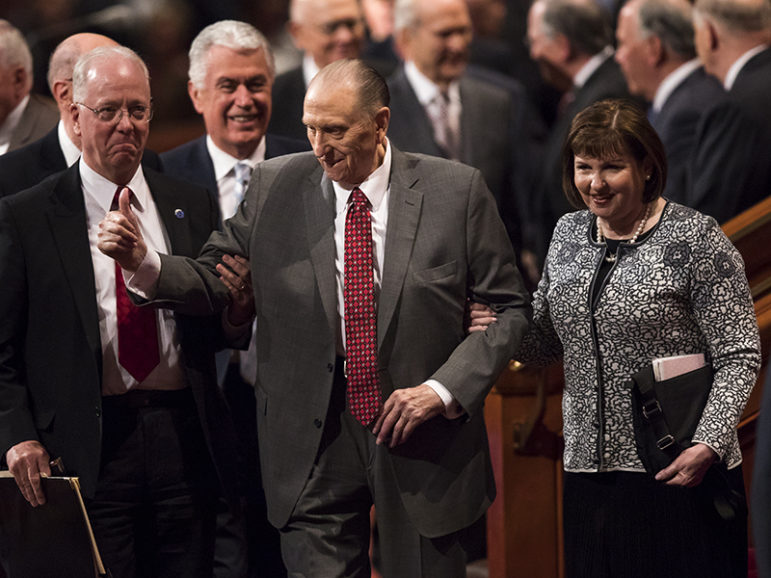 Monson’s presidency was marked by moves such as a 2012 announcement lowering the ages for young adults to serve missionary terms. The age for men to begin their service dropped from 19 to 18 and for women from 21 to 19. This markedly increased the number of young Mormons serving missions. A year later, the number of full-time missionaries had risen from 58,700 to 80,300, including more than twice as many young women, according to church statistics.

Monson was also seen as a leader of the 2008 directive to Mormons in California to support the state’s Proposition 8, a referendum that called for marriage to be defined as only being between a man and a woman. The measure passed at the ballot box but was declared unconstitutional in 2010.

However, the church moved toward a rapprochement with the LGBT community in 2015 when it helped write and promote successful passage of a law extending employment and workplace protections to LGBT people and conscience protections to individuals, churches and faith-based associations.

During Monson’s presidency, the LDS church also added a fourth charge, a call for Mormons “to care for the poor and needy,” to its original “threefold mission” to proclaim the LDS message, live holy lives and perform sacred rituals such as baptism for those who have died.

Such care was a lifetime commitment for Monson. He was known for his view to “never let a problem to be solved become more important than a person to be loved,” the official statement recalled.

A lifelong friend, the late newspaper editor and publisher Wendell J. Ashton, once described the tall, robust Monson as “like a pine tree — the top is high and ascending to heaven but the branches are broad, low to the ground, and protective of all who need shelter there.”

Singer Marie Osmond recalled Monson as a great friend, tweeting “#RIP to our dear #LDS prophet @ThomasSMonson. He has always been there for our family during special occasions and even in the most difficult of times. My heart mourns for his loved ones but it is a glorious day in heaven.”

#RIP to our dear #LDS prophet @ThomasSMonson. He has always been there for our family during special occasions and even in the most difficult of times. My heart mourns for his loved ones but it is a glorious day in heaven. ?? #tilwemeetagain #SaviorsEmbrace pic.twitter.com/qOBj5mYDcD

In 1949, as a 22-year-old bishop — or volunteer local pastor — in two Mormon congregations in Salt Lake City, he was a spiritual leader for some 1,000 church members, including 84 widows, many whose husbands had died in World War II. Each widow received regular visits from Monson as well as a promise: He would speak at their eventual funerals, offering a word of remembrance.

Over the ensuing decades, however busy he was, Monson kept his word – remembering them along the way with gifts at Christmas and other times during the year and, as promised, speaking at their funerals. When he became president, a church announcement said he was “happy” to keep those promises. In 2009, President Obama meets with, from left, Sen. Harry Reid; Joshua DuBois, director of the White House Office for Faith-Based and Neighborhood Partnerships; LDS church President Thomas Monson; and church Elder Dallin Oaks in the Oval Office. During the meeting, they looked at a five-volume genealogy prepared by the church’s Family History Committee. Photo courtesy of The White House/Pete Souza

Monson continued that practice of seeking those in need throughout his life, friends said. A 1986 article in the Ensign, a church magazine, recounted a time when Monson, who often visited nursing home patients in and around Salt Lake City, was told some of those patients wouldn’t recognize their visitor, so advanced was those individuals’ decline.

Daniel C. Peterson, a professor at church-owned Brigham Young University in Provo, Utah, still recalls decades ago when Monson “came through my mission when I was serving as a missionary in Switzerland. There were about 60 of us. In every case, he could name the (missionary’s home) stake president and tell something about them. I was impressed by his memory, and how he cared about these people individually and knew something about them.”

Early on, Monson was recognized as someone with leadership potential. At age 31, he began a three-year term as head of the church’s Canada Mission, where he strengthened outreach in Quebec and to various immigrant groups in Canada.

On his return to Utah, he held local church leadership positions in two stakes — groupings of several congregations in a given area – and moved rapidly to more churchwide responsibilities.

By 1963, when he was just 36, he was appointed to the Quorum of the Twelve Apostles  — the youngest person named to that body in 53 years. The next-youngest member was 17 years his senior.

Between 1963 and his 2008 call to the denomination’s top role, Monson spent much of his time alternating between church leadership duties and supervision of various LDS-owned media enterprises.

Thomas Spencer Monson was born in Salt Lake City on Aug. 21, 1927, the second of six children born to G. Spencer Monson and Gladys Condie Monson. He earned an undergraduate degree in business from the University of Utah, followed by a Master of Business Administration degree from Brigham Young University.

Before his rise to top leadership, Monson’s career was in advertising and print sales management for Deseret Media Corp., which publishes the church-owned Deseret News, a general-circulation newspaper. He later oversaw the church’s Bonneville International media operation, which owns radio and television stations in several U.S. states.

Involved in the Boy Scouts of America from his youth, Monson served on the national executive board of the organization since 1969. In 2016, the national organization began construction of the Thomas S. Monson Leadership Excellence Complex in Glen Jean, W.Va., due to be completed in 2020.

Monson’s wife, the former Frances Beverly Johnson, died in 2013. He is survived by three children, eight grandchildren and many great-grandchildren, an official biography stated.