Fear is largely seen as a psychological issue. It lodges in our minds where it lives and grows if it isn’t assuaged. But fear is also a spiritual issue, according to Benjamin Corey.  In his new book, “Unafraid: Moving Beyond Fear-Based Faith,” he explores how the emotion can affect us at a deeper level. Here he discusses what he believes are misconceptions about “the fear of God” and what it means to take seriously the Bible’s commands to “fear not.”

RNS: Given the high levels of anxiety in America, your book is timely. How do you see Christians living in fear today?

BC: Fear seems to have gripped American Christianity like never before, and the impact is already noticeable. This generalized fear is causing us to turn on one another, abandon consistent and collective application of Christian values. It’s seriously damaging our witness.

While I think there are endless examples of how we are collectively living in fear, one of the most pressing and stark examples right now is Christian support for politicians like Donald Trump and Roy Moore. There seems to be a tremendous fear of not having political power, or fear of losing political power, and the fear has grown so strong that Christians are often supporting, justifying, or outright ignoring issues of basic morality.

I feel like I am watching the people who raised me morph into the very thing they warned me not to become. The world has been watching and sees how we have collectively abandoned our professed beliefs out of fear. 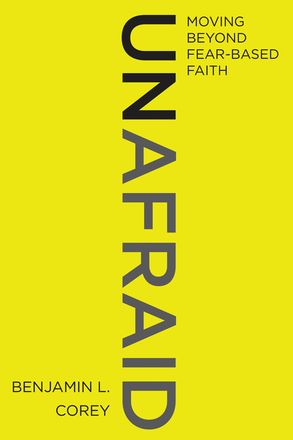 Image courtesy of Harper One

RNS: It has been said that the most repeated command in the Bible is some variation of “fear not.” Why does this matter?

BC: The Biblical command to “be unafraid” is critical because fear is the chief barrier to the Christian mission. Most of us readily know that Jesus taught the greatest commandment is to love—God and others. This willingness and capacity to love is at the foundation of a Christian’s job description. What’s also interesting is that the Bible doesn’t describe the opposite of love as hate. It positions fear as the opposite of love.

RNS: There’s a tension, though, when it comes to the Bible. The text also encourages the “fear of God,” and this includes being afraid of divine wrath. How do you understand these passages?

BC: There are certainly passages that reference fear of God in a positive way, but as a starter I think there’s nuance of language that gets missed in translation. The positive “fear” referenced in Scripture is about reverence and respect—not terror. In fact, in the Parable of the Talents found in Matthew 25, the servant who was afraid of his master is rebuked.

As far as the wrath of God, I think it’s best framed this way: God is love and is moving the human story in the direction of wholeness and restoration. He is busy inviting us to partner with him to right injustices, and to fix what is broken in the world—whether areas of an individual’s life, or on a broader systemic sense. To those who refuse to partner with him, or who deliberately try to resist this movement of making the world right again, I can only imagine that such resistance to his love must feel like wrath.

RNS: You say that our notions of fear are rooted in the images of God we hold. Which divine image is most harmful in your opinion?

BC: I think the most harmful image of God we hold is one where he is a slave to his own anger, as if anger is the central essence of God and the one thing that controls him. We’ve been known to say things like, “God cannot look at us because of the blackness of sin” or, “God cannot stand to be in our presence because of sin.” Even the way we describe Jesus’s death on the cross is problematic, because we’ll often say that God is incapable of forgiving us or being in relationship with us until he has first had bloodshed to satisfy his anger.

All of these images of God place anger and wrath as the primary attribute of God. And worse, these images elevate this attribute to the point that God himself appears to be at the mercy of it.

RNS: In addition to images of God, you survey the stories we tell about God. Why do you believe we must begin the story of God with creation rather than “the fall” and sin?

BC: Narrative has a tremendous power to shape and give identity. Humanity as a species has relied on guiding narratives long before we even had the ability to write them down. These narratives help individuals understand the story they find themselves in, and help us develop identity, meaning, and purpose within that story.

One of my atheist friends once said, “As far as narratives go, you guys have the best one.” I agree. The problem, however, is that too often we begin that narrative in the second act and miss the importance of the opening scene—and that slight alteration has the ability to throw everything off.

When we begin the Christian narrative with sin and the “fall”, we are subtly encouraged to adopt an identity as sinners in the hands of an angry God, to borrow the phrase from Jonathan Edwards. However, when we take a step back and begin with creation, we begin the narrative by an affirmation of our true identity in this story: we are created in the image and likeness of God— and before anything in this story is disrupted, God first  declared that we are “good.”

This helps us more properly frame the rest of the story. Instead of viewing ourselves as sinners on the wrong end of an angry God, we can reframe it as being God’s image bearers who are oppressed by the forces of sin, but who are on a trajectory of healing, wholeness, and reconciliation.

RNS: You conclude the book by asking people to draw a circle and write Jesus’ name in the middle, but this is more than an art project. What is the goal behind this exercise?

BC: Much of the book is about “reframing” things from a different angle, and this is perhaps one of the key reframes I hope readers will make. We often view people and the world around us as being “in” or “out,” “saved” or “unsaved” or some other classification system where there’s a line to separate people. Over the years I’ve started to doubt the usefulness of this way of thinking, even though it’s deeply engrained in Christian culture.

I think a better question to ask is, “Are we on a journey that is moving towards Jesus, or away from him? And are we helping others to move toward him, or away from him?” I asked Jesus into my heart at least 782 times before I was 10, and yet, crossing that line of being “in” didn’t always make a difference. That’s because this sort of “arrival” on the correct side was never the goal.

The goal of the Christian life is to be like Jesus. In fact, 1 John it tells us that if we claim to be people of God, the only evidence that matters is that we’d live like Jesus lived. In light of that, I think the best thing we can do is scrap our focus on arbitrary lines of and reframe our focus on more relevant questions about Jesus.

For more on this topic, check out “Unafraid: Moving Beyond Fear-Based Faith” by Benjamin Corey.