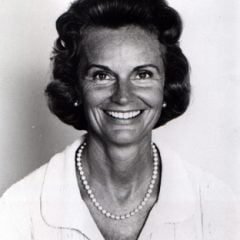 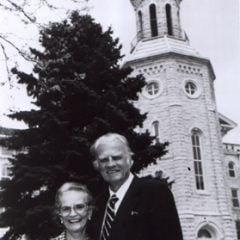 Wheaton, Ill. — Billy Graham and his wife, Ruth, marked their 50th wedding anniversary on Aug. 13, 1993. The Grahams are pictured on the campus of Wheaton College where they met and courted. Religion News Service file photo. 1993

(RNS) — Throughout the six decades of Billy Graham’s career, his wife, Ruth Bell Graham, served as the only true constant in his life other than his faith.

Despite long separations when Graham was on the road preaching, Ruth, who died in 2007 at age 87, remained his bedrock, often speaking up to offer advice, yet just as often staying silent so that he could focus on his mission.

“There would have been no Billy Graham … had it not been for Ruth,” said the late T.W. Wilson, a key member of Graham’s staff, in “A Prophet With Honor,” William Martin’s biography of the evangelist.

Graham was the first to acknowledge his wife’s importance. “Your counsel, advice, encouragement and prayer have been my mainstay and at times I have almost clung to you in my weakness, in hours of obsession, problems and difficulties,” he wrote in a 1963 letter to Ruth from Los Angeles, according to Patricia Cornwell’s biography, “Ruth, A Portrait.”

In a statement issued at his wife’s death, Graham, then age 88, praised his wife as his “life partner” and said “we were called as a team.”

“No one else could have borne the load that she carried. She was a vital and integral part of our ministry, and my work through the years would have been impossible without her encouragement and support,” he said.

On the surface, Ruth perhaps seemed a stereotypical preacher’s wife: She stayed home in North Carolina to raise their five children and kept herself — and her personal needs — out of the spotlight. Her independence in the domestic arena allowed Graham a certain freedom from family responsibilities and granted him the ability to travel widely on his many crusades.

“The self-abnegation she learned in childhood probably prepared her for the role she played in (Graham’s) life,” said Randall Balmer, chairman of the religion department at Dartmouth College and author of a documentary on Billy Graham. “She had to adjust her sense of calling and mission to fit what he had in mind.”

Ruth Bell was born in 1920 in China to missionary parents. By the time she met Graham at Wheaton College in Illinois at age 20, she was used to a life of service, hardship and separation from loved ones. Originally, she planned to follow her parents to the mission field. However, she decided instead to marry Graham in 1943 and resigned to “slip into the background,” as she wrote in her journal.

Although she preferred to stay behind the scenes, her impact on her husband was all too evident. Early in his career, she read her King James Bible over and over and clipped newspaper and magazine articles for sermon ideas. Raised in a family that prized intellectual inquiry, she brought to the marriage a thirst for knowledge and a worldly perspective.

“She proved for him a real, serious introduction to things overseas,” said Mark Noll, professor of history at the University of Notre Dame. “This was important given the fact that from the early ’60s through the ’90s Billy Graham was much more active in other places in the world than the United States.”

Her experience among missionaries, where women served in the same spiritual trenches as men, also shaped her view of gender roles. “Billy was brought up in a house where the women did not question the men, while in the Bell house, that’s all we did,” she said in Cornwell’s biography.

“He was more flexible than other evangelists, and his domestic influence was crucial in that regard,” Noll said. “He never got hung up on American denominational issues. That’s very much a missionary characteristic, particularly in places like China where there was a very small Christian population, and all denominations had to learn to get along.”

Together with her sense of humor and love of practical jokes, Ruth’s disdain for the trappings of fame and power kept Billy Graham grounded, friends said.

“When he got home she put him right back on track. She didn’t kowtow to him,” said Cornwell, who grew up near the Grahams in Montreat, N.C., and first met Ruth Graham when she was 9 years old. “She wasn’t the typical spouse who loved being ‘Mrs. Billy Graham’ in a negative sense. I hate to think what might have happened to him if she had been.”

Although Billy Graham acted as an informal adviser to several presidents and the Grahams considered both the Nixons and the Bushes friends, Ruth was never completely comfortable with the mix of politics and religion. When President Johnson asked Graham’s opinion on potential running mates in the 1964 election, Cornwell recounted, Ruth kicked her husband under the dinner table, telling him, “You are supposed to limit your advice to moral and spiritual issues and stay out of politics.”

“She kept him humble. There were temptations to be a presidential candidate, and other ambitions,” said Eddie Gibbs, professor emeritus of church growth at Fuller Theological Seminary in Pasadena, Calif., and the training director for a three-month Graham crusade in England in 1984. “But he always came back, saying, ‘My calling is as an evangelist.’ My hunch is that she was the steadying influence in the background.”

While Billy Graham ministered to millions, Ruth, in keeping with her dislike of the spotlight, tended toward a smaller scale. She befriended convicted felons, troubled teens and drug addicts, and in 1975 persuaded Graham to help evacuate a 16-member family from Vietnam. Eventually she slowed her ministries due to failing health.

Though she rarely spoke of those she aided, her efforts could not have helped but reinforce for Graham her talents and her faith, reminding him of his belief that “our marriage was planned in heaven,” as he wrote to Ruth in the 1963 letter quoted in Cornwell’s book.

“She never tried to be a theologian or lecture him. It was just a quiet influence,” Cornwell said in an interview. “It was not what she said, but what she was.”

News
‘Peeing pastor’ hunt comes to an end
News
New book links the decline of religious authority to the end of empathy
News
Study: Biden still leads among Latino Christian voters, but Trump’s support has grown
Opinion
How a Sean Feucht worship service convinced me I am no longer an evangelical
News
In Oregon, churches and anti-fascists unite to provide mutual aid to fire evacuees and others in need
© Copyright 2020, Religion News Service. All rights reserved. Use of and/or registration on any portion of this site constitutes acceptance of our User Agreement and Privacy Policy, Privacy Statement and Cookie Notice. The material on this site may not be reproduced, distributed, transmitted, cached or otherwise used, except with the prior written permission of Religion News Service.