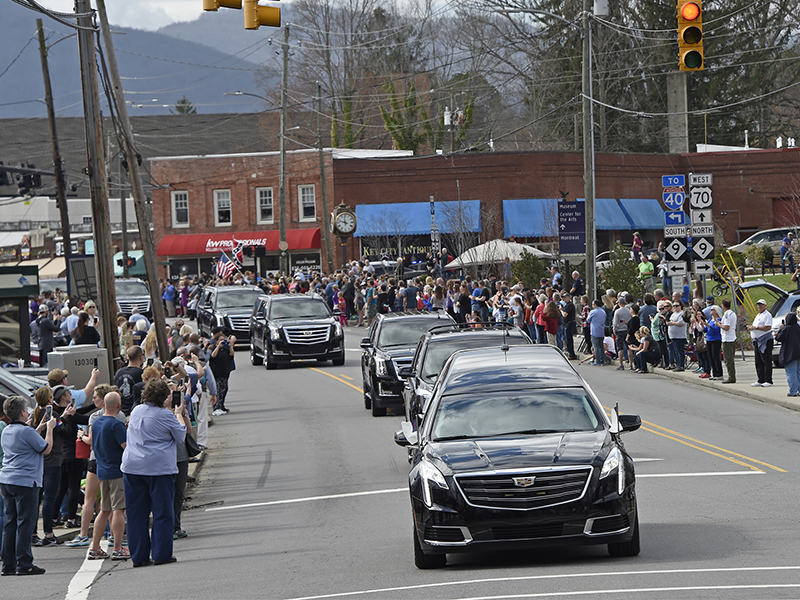 People line the street to pay respects as the hearse carrying the body of the Rev. Billy Graham travels through Black Mountain, N.C., on Feb. 24, 2018. The procession is part of more than a week of mourning that culminates with his burial next week at his library in Charlotte. (AP Photo/Kathy Kmonicek, Pool)
February 25, 2018
The Associated Press

CHARLOTTE, N.C. — Well-wishers lined freeway overpasses and small-town streets to honor the late Rev. Billy Graham as his motorcade crossed his beloved home state of North Carolina for four hours on Saturday (Feb. 24) from his mountain chapel to his namesake library in the state's largest city.

Adults and children stood behind wooden barricades and yellow tape, police officers saluted and admirers captured the moment on cellphones along the route. Firetrucks parked on overpasses along Interstate 40.

Pallbearers, followed by family members, carried the coffin into the Billy Graham Library in Charlotte, which will serve as a backdrop for the evangelist's funeral.

Franklin Graham said he was fulfilling a promise to take his father's body to Charlotte. He said was overwhelmed by the "outpouring of love we are seeing as we travel."

The motorcade for "America's Pastor," which began at the training center operated by Graham's evangelistic association in Asheville, was a chance for residents in some of the evangelist's favorite places to pay tribute. Graham often shopped or caught trains in Black Mountain. He made his home in the nearby community of Montreat.

"He has never really reveled in all of the celebrity. It's come with the territory," said Joe Tyson, a family friend who runs a furniture store in Black Mountain, where he watched the procession. "But they've managed to live a very normal life for such famous people. And I think he'd be very proud that his neighbors turned out and quietly celebrated his reward and his passage into heaven."

Graham, who died Wednesday at his home in North Carolina's mountains at age 99, reached hundreds of millions of listeners around the world with his rallies and his pioneering use of television.

A viewing will be held at the Billy Graham Library in Charlotte on Monday and Tuesday. Graham will also lie in honor in the U.S. Capitol rotunda on Wednesday and Thursday, the first time a private citizen has been accorded such recognition since civil rights hero Rosa Parks in 2005.

The procession was part of more than a week of mourning that culminates with his burial Friday.

A man played bagpipes at a highway rest area near Marion, where an overpass was draped with flags from about 15 nations. In Black Mountain, a group sang "Amazing Grace."

Motorists lined sidewalks and medians as the motorcade rolled through Charlotte and neared the Graham library, which was closed as mourners placed flowers and awaited arrival of the evangelist's casket.

"He was so bold, he so boldly confessed the word of God," said Madeline Reid. "And I believe because of his service to humanity, that he's truly gonna be great in the kingdom of heaven."

"He was such a wonderful man of God, and a messenger of God," she said.

Asked if there would ever be another force like his, she replied: "I doubt it. Perhaps, in my next, in another lifetime. Not in my lifetime."

Leighton Ford, the evangelist's brother-in-law, said he was thankful for the show of support and also a little sad.

"I think he'd say, 'It's not about me. It's about the Lord,'" Ford said. "I remember at his last stadium meeting here in Charlotte, the mayor of Charlotte told us he was writing out the platform of Billy, and everybody was cheering, and Billy said, 'Wait a minute. It's not about us. It's about Him.'"

Graham will be laid to rest at the foot of a cross-shaped walkway at the library in Charlotte, buried in a simple plywood coffin next to his wife, Ruth, who died in 2007. His coffin was built by inmates at the Louisiana State Penitentiary in Angola, La., who typically construct caskets for fellow prisoners who cannot afford one.

The funeral will be held in a tent in the main parking lot of Graham's library in tribute to the 1949 Los Angeles tent revivals that propelled him to international fame, family spokesman Mark DeMoss said. About 2,000 people are expected at the private, invitation-only funeral.