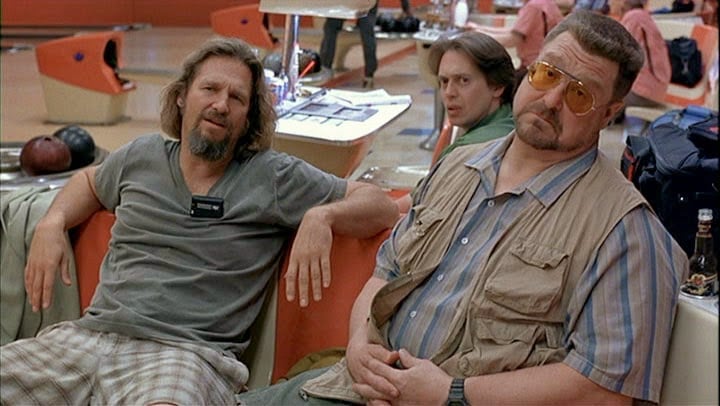 I know that you will kick yourself for not remembering, but yesterday marked the twentieth anniversary of one of the great cult films of our time, “The Big Lebowski.”

“The Big Lebowski,” directed by the Coen brothers, is the ultimate stoner classic – the shaggy dog story of the Dude and his quest to seek revenge for a urinated-upon rug. It has a great cast: Jeff Bridges, Steve Buscemi (“Shut the f_____ up, Donny!”) Sam Elliott, Julianne Moore, the late Philip Seymour Hoffman, and John Turturro.

But, Jews remember the film for yet another reason – and that would be the immortal performance of John Goodman as Walter.

Walter is a Viet Nam veteran (who cannot stop mentioning the war, inviting us to realize that he might be suffering from PTSD).

Walter is a convert to Judaism who must explain why he will not participate in a bowling tournament on Saturday:

The Coen brothers are proudly, consciously Jewish. If you don’t believe me, re-watch “A Serious Man.”

So, leave it to them to offer us one of the most profoundly Jewish characters in cinematic history.

Yes – up there with Tevye, Ari Ben Canaan in “Exodus,” Yentl – and more deeply Jewish than any character that Woody Allen has played.

So, let’s talk about Walter.

First, Walter is a convert, aka a Jew by choice.

The Coen brothers, therefore, introduced the American movie-going public to the idea that you don’t have to be born Jewish to do Jewish – and that, as American Jewish folk wisdom would have it, some of our best Jews are those who chose to join the Jewish people. Some people I love the most in the world fall into that category.

Second, Walter is a Jew who takes Jewish practice seriously – albeit in a loud and profane way.

It is remarkably rare for a figure in popular culture to proclaim any religious feeling (there are, of course, notable exceptions).

Even less common do we find a cinematic Jew, other than a noticeably Orthodox Jew, who takes Jewish observance seriously.

More than that: this is not just about lighting Shabbat candles, or attending a seder, or going to a bar mitzvah, or attending a Jewish funeral, or being married under a chuppah – all rituals that you can find in any number of movies.

Walter’s Shabbat observance is specifically one of withdrawing, temporarily, from the world – from the profane (even as he is profane) activities of the six days of creation. It is a Shabbat – not only of menucha (rest), but of kedusha (holiness).

(Now, as for not rolling on Shabbos: I will leave it to my more observant colleagues to discern whether or not this is really a violation of Shabbat. Yes, if you are paying money to the bowling alley. But rolling itself….?)

Which brings me to my final point about Walter, and the Dude, and Donny. They are in a bowling league – and therein lies its own story.

In his often quoted book Bowling Alone: The Collapse and Revival of American Community, Robert Putnam offers this potent observation.

The bowling industry is in trouble. Yes, more people are bowling than ever before. But, they are bowling alone. They are not part of bowling leagues.

And, why should this matter? Because, Putnam reminds us, the real money in the bowling business is not in the usage of the alleys, nor even in the rental of those ridiculously comfortable shoes that everyone in town has already worn.

No, the real profit in the bowling business is in the food concessions. People in bowling leagues eat and drink. People who bowl alone do not eat, and they do not drink beer. Hence, the economic fallout.

For Putnam, this is nothing less than a sociological metaphor. Putnam shows how we have become increasingly disconnected from one another and how social structures— whether they be PTA, church, or political parties — have disintegrated.

We are all, therefore, bowling alone.

The unheralded sweetness of “The Big Lebowski” is that, for the Dude, Donny, and Walter, their bowling team constitutes a small (eternally squabbling, but ultimately loving) family. Walter’s eulogy for Donny is absurd, comparing his death to the death of American soldiers in Viet Nam, but it is nevertheless heartfelt.

So, The Big Lebowski” ranks as one of the most Jewish films in the last few decades.

Yes – just for that one scene, in which Walter proclaims his fealty to Jewish law and practice.

We could do far, far worse than to produce Jews like Walter.